Follow along as 888 ambassadors divulge a plan to use tag team strategy at the 2016 WSOP. Find out how they plan to make it work. 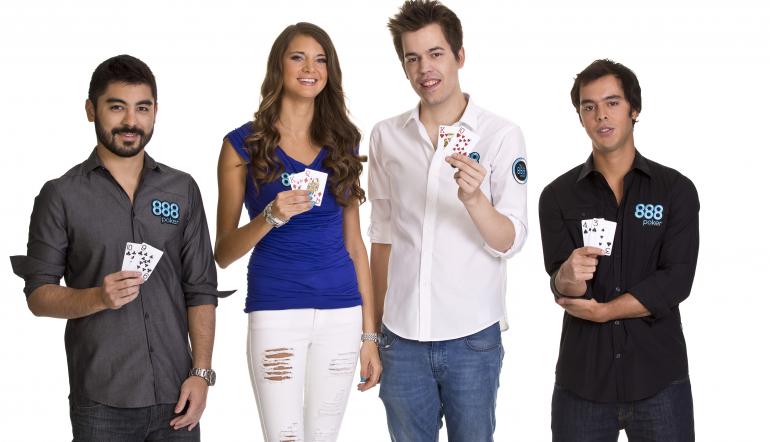 On July 6, the 2016 World Series of Poker, which is officially sponsored by us, will host a tag team event for the first time in 33 years. Event #61: $1,000 Tag Team No-Limit Hold'em will allow for 2-4 person teams, each required to play at least one round of blinds.

The tournament will feature a 5,000-starting stack, 60-minute levels, and allow players to tag in a teammate, anytime he or she is not in an active hand. Aside from that, not much information is known.

That last question is particularly relevant, as most poker players today have never played a team competition. Still, that hasn't stopped people from getting excited.

"This Team Event seems like really fun," says 888 ambassador Sofia Lövgren. "I usually like to swap with some friends and to celebrate together when we win. A team event in WSOP is something I don’t want to miss. I don’t know enough yet about which team size that would be best, though."

Lövgren's fellow 888 ambassador, Nicolau Villa-Lobos, seems to think he has the answer:

"I would look for two players only," the Brazilian explains. "The less time outside the table makes it easier to get in the zone."

We decided to dig a little deeper and ask some of the 888 ambassadors their poker strategy for a team event.

If you play the event, who will you look to have on your team?

Lövgren: I could imagine doing a “Girl Got Game Team” with some poker friends who are also participating in a reality show named Girl Got Game. Seven awesome girls and I are shooting that show right now, and I would love to team up with any of them. Both Kitty Kuo and Xuan Liu are also competing in team events in Global Poker League right now, so they would be nice to have on my team. But I have a feeling that their husbands/boyfriends have reserved them already.

Villa-Lobos: Someone that I trust and is skilful.

Bruno Politano: I would choose my Brazilian poker friends.

What sort of strategy will you use for this sort of event? What advice do you have for amateurs who will be playing it?

Lövgren: Bring your A-game of course, and most importantly cheer and support your teammates through the whole event. Support is important and will motivate you to focus more and play even better!

Villa-Lobos: Exchanging information with your partners about the players at the table is essential. Information is everything!

Politano: I don't play team events, but some good advice is to choose tight players for your team. Tight is the best option to play on a team.

Kawauti: Always try to play the best, and extract the best from my teammates. Everybody should be relaxed, having a good time, and playing the best.

Have you ever played team poker before? If so, when and where?

Villa-Lobos: Yes. In Brazil, we have this state competition. Six players each state and we play different types of sit and go -- NLH full ring; 6-max; heads up; and PLO 6-max. It's a lot of fun, and my state Rio de Janeiro won the first ever. One of the best feelings ever was when I won the final full ring. Entering the heads up I already knew that I had to win so we could win the whole championship. It was amazing.

Politano: Yes. I played two times in the National Brazilian Tournament. I play every year for the Fortaleza team (Ceara state).

Kawauti: Yes, I played a team poker tourney once here in Sao Paulo. It was a long time ago in a poker club called Dealer Alphaville.

If you could choose anyone in the world to be your partner, who would it be and why?

Politano: I choose my best friend Bruno Aguiar because he plays tight and we make a good team to play. We have fun.

Kawauti: Nicolau Villa-Lobos, he is my best friend and one of the best poker players in the world in my opinion.

Will you be playing the 2016 WSOP Team Event? If so, what's your preferred number of teammates and optimal strategy? Let us know on Twitter @888poker.