What is Counterfeit in Poker?

Counterfeit essentially means that a relatively strong hand gets significantly weakened after an additional card is dealt. A common example in Hold’em might be where we hold two-pair on the flop but the turn card pairs damaging the value of our hand. Imagine we hold 89 on the T98 board and the turn card comes a Ten. Our eight becomes irrelevant because we now hold Tens and Nines. Furthermore, any player with a Ten or strong 9x (such as A9) has now improved to beat us. We say that our two-pair has been counterfeited. Counterfeiting applies to a range of additional scenarios and also features strongly in games with low hand ranking systems such as Omaha hi/lo. 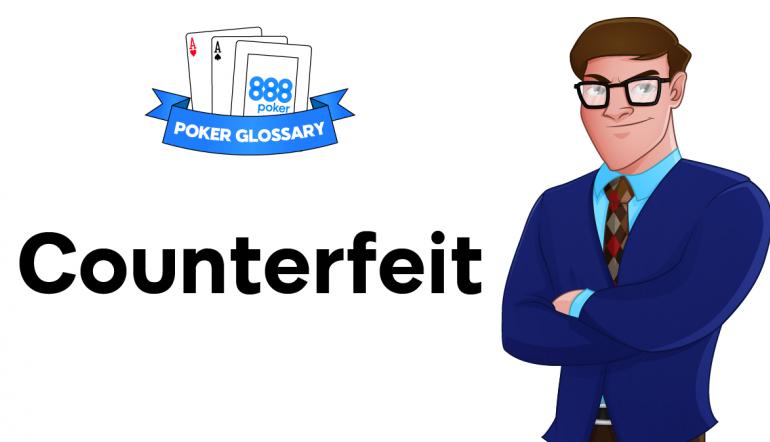 Counterfeiting in No Limit Hold’em

Counterfeiting in No Limit Hold’em is best illustrated with examples.

On the flop we held a pair of Fours. (More specifically two-pair, Fours and Fives). If our opponent held an unpaired hand such as AJ, our Fours were technically good. The Seven on the turn counterfeits us though. We can no longer use our pocket-fours as part of our hand, since there is a higher-two pair available on the board. On a Seven turn our hand turns into two-pair with Fives and Sevens. Although the absolute strength of our holding just took an upgrade, its relative strength took a huge nose-dive. Now it’s the kicker which determines who has the best two-pair, and we hold a measly Four as our kicker.

This example can be especially confusing to newer Hold’em players. Which hand wins here out of 79 and AK? Newer players may sometimes be surprised to see AK scoop the pot here. After all, we have two-pair with our 79 while our opponent has one-pair with his AK. What just happened?

The problem is that 79 gets counterfeited when the Deuce pairs on the river. Now any Ace actually has a two-pair holding (Aces and Deuces) which is strong enough to beat our Sevens and Nines. Note that it’s the rank of the highest pair that determines the strength of a two-pair combo.

Although counterfeiting (according to our definition) mainly applies to one-pair or two-pair hands, there are other scenarios in Hold’em which can also be referred to as getting counterfeited.

In the above example we hold a full-house on the flop and turn. What is our hand strength on the river? We can no longer use our paired Kings to formulate a made hand on the river since four-of-a-kind Queens is available on the board. We hence have Quad Queens with a King kicker. This means that despite having pocket-kings we will lose to any Ace, no matter how ragged. If our opponent holds the A2o he’ll scoop the pot, because he has Quad Queens with an Ace kicker.

Counterfeiting in Omaha-8 (Omaha hi/low split) is a huge part of the game. Let’s see an example.

We’ll focus exclusively on the low hand here. On the flop, we qualify for the low hand A,2,4,6,8. This is the best possible low hand given the board texture: we can refer to it as the nut low.

The turn comes low, the Deuce, but unfortunately, we can’t use this to improve the strength of our low. We already hold a Deuce, and pairs can’t be used to construct a qualifying low in Omaha-8. Our absolute hand strength did not change; we still hold the A,2,4,6,8. Our relative hand-strength took a huge hit however, since there is a now a better nut-low available. Any player with A3xx would be able to play the low A,2,3,4,6 which is superior to our A,2,4,6,8. In Omaha-8 this situation is referred to as getting counterfeited.

Imagine however that we held a slightly different holding on the same runout.

On the flop, we hold the same nut low as previous A,2,4,6,8. Note that like other Omaha variants we must use exactly two of our hole-cards when constructing our hand. What happens when the Deuce hits on the turn this time? Do we still get counterfeited? Since we now have the Three as one of our hole cards, we can still construct the nut-low on the turn. Although we ordinarily would have been counterfeited by the Two, we can use another of our hole-cards (the Three) to construct the new nut-low. In Omaha-8 this is referred to as counterfeit protection.

Example of Counterfeit used in a sentence -> (Hold’em) Our strong full house was completely counterfeited when the Quads got there on the river. (Imagine KKK2K board and we hold QQ, any Ace wins).

How to Use Counterfeit as Part of Your Poker Strategy

In Hold’em, the most important strategy application is simply to recognize when we have potentially been counterfeited. In the example with the 79s (above) it’s quite common to see novice players playing aggressively on the river, hoping to extract additional value with their two-pair. They are only doing this because they don’t understand the full significance of the Deuce pairing on the river. Experienced players will recognize instantly that their two-pair has possibly been counterfeited and adjust their strategy accordingly.

In the scenario where we hold the pocket-Fours and the Seven pairs on the turn, our hand is downgraded to one of the worst possible holdings. It is no longer equivalent to a pair of Fours in the relative sense but instead becomes equivalent to holding Four-high. Seeing as good river strategy involves bluffing our worst possible holdings in Hold’em, counterfeited pairs are often excellent candidates for river bluffs.

Counterfeiting in Hold’em happens occasionally, but not extremely frequently. This is one reason why novice players often miss counterfeiting when it happens. They are simply not used to seeing the situation. Counterfeiting in Omaha-8 happens all of the time however and constitutes and integral part of the game.