What is String Bet in Poker?

A string bet is a betting action in live poker games that is illegally split into multiple components. The classic example is the statement “I call your bet….and raise you another 50”. In its current form, the player will be forced to just call the bet, since this is what was announced initially. There are many other ways to string bet, such as placing one chip into the pot and then trying to place additional chips afterwards; only the first chip will count. Repeated string bets could be considered an attempt at angle shooting by the other players at the table. 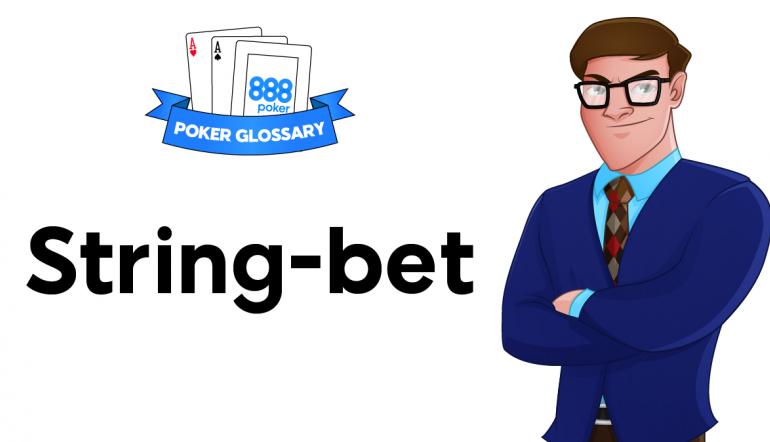 Modern live poker rules are that we only get one shot to clearly indicate our betting intentions. This is in contrast to how poker is sometimes portrayed in old films. For example, when facing a bet, it’s extremely common to hear an old movie star say “I see (call) your bet……and raise you another $100”.

If the same line was used in a modern live casino, the player would be forced to just call. His raise would not be valid. This is because the first word out of his mouth was “call”, and this action is binding. If his intention was to raise, the first relevant word he utters needs to be “raise”.  Illegally splitting our action into two parts is considered an angle shoot and described as string betting in most casinos.

String betting need not only occur verbally. If a player wishes to wager a certain amount of chips, he needs to place that amount of chips into the pot with one smooth motion. If he only puts half of the required chips into the pot with his first action, this action will stand. Adding additional chips afterwards is considered a type of string bet. The only exception is if a player has already declared verbally the exact amount he wishes to wager – he can then place the chips into the middle at his leisure.

Example of String Bet used in a sentence -> If unsure about handling chips, always announcing decisions verbally is a good way to avoid accidentally making a string bet.

How to Use String Bet as Part of Your Poker Strategy

The strategy advice here is simple. We should make sure our actions at the table are unequivocal and remember that the first decision is binding whether it’s a vocalization or not.

String betting can be considered an angle shoot for two main reasons.

2. String betting can be used deceptively. A player pretends that he actually wanted to raise but relies on the dealer forcing him to just call.