Poker Preflop Strategy: 4 Spots Where You Should Fold Preflop

Preflop folding can be hard, as most players want to see a flop. However, well-timed folds can be the difference between breaking even and winning big.

Nobody likes to fold in poker. It’s much more exciting to take our shot at winning while finding out what our opponent holds in the process. And yet, well-timed folds are usually what makes the difference between break-even poker players and big winners.

Back in the early days of online poker, it was common for players to defend their big-blind with hugely tight ranges. Any modern professional looking back at a standard defending range of the era would doubtless be amused at how ridiculously tight and impractical the range was. We are talking pocket pairs and stronger broadway hands only.

The community as a whole eventually realised that loosening up from the big blind was necessary.

That loosening trend has continued to the point where modern, big blind defending ranges have gone the other way.

In the current games, there are quite a number of players utilising absurdly wide big-blind defending ranges in several spots.

Take a look at the following range: 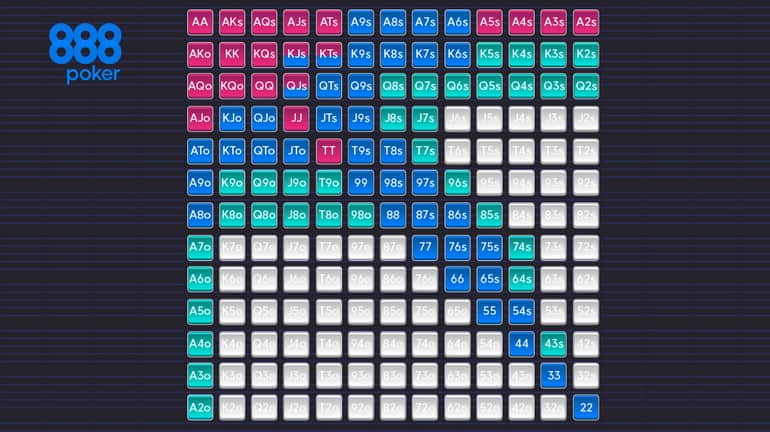 Imagine we are defending from the big blind against a button 3bb open raise in a low-limit online cash game with 100bb effective stacks. The strongest category of hands on the grid is recommended for 3betting, while the hands in the mid-strength category are recommended calls.

The hands in the weakest category are ones that should only be called for a particular reason, otherwise folded.

For a start, anything that is uncategorised on the above gridshould not be defended preflop by default.

We do well to keep in mind the following:

Finally, anything in the weakest category of hands on the above grid is not automatically a defend. If we have a good reason (such as the opportunity to play vs weak opposition) we can protect, otherwise we should fold and stick to the standard calling range.

Most of the weaker hands on the above grid damage a player’s winrate rather than improve it.

Game theory solvers tend to defend quite wide against 3bets. Trying to copy such ranges is problematic since solvers don’t realise that the average Villain doesn’t 3bet as much, supposedly. Total frequencies around 8-10% are typically incentivised in theory, while the typical Villain only 3bets 5-6%

So, how do we adjust to opponents who are not 3betting as aggressively as they are supposed to be?

The solution is simple.

We have to fold more frequently to make up for our opponent’s lack of aggression.

For example, take a look at the following defending range when facing a 3bet from the blinds after open raising from the button. 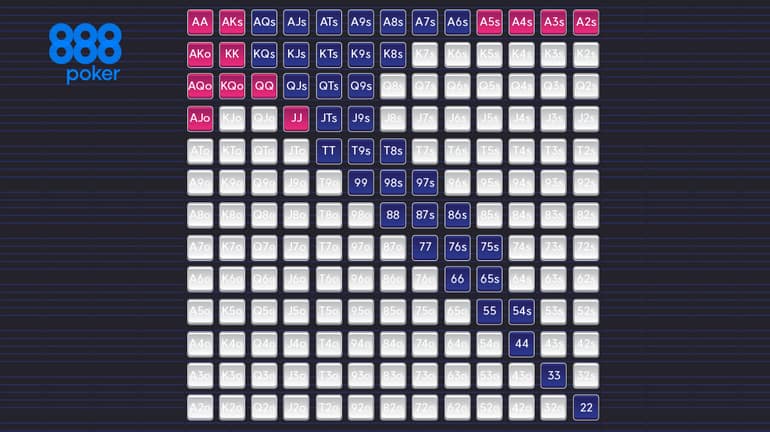 Defending this type of range would technically result in us folding too often from a theory point of view. However, this is the whole point. We want to defend tighter than is correct in theory to exploit our opponent’s lack of 3bet aggression.

Note also that our defence strategy is not directly related to the pot odds. Some relatively high equity hands (like A9o) don’t make it into the defending range for playability reasons.

On the flip side of the coin, some low equity holdings (like 86s) can be defended due to their increased playability.

Similar to 3betting ranges, the average 4betting range used by players is significantly tighter than it is supposed to be. We exploit this by folding more frequently against 4bets than is theoretically correct.

4bet scenarios also provide an easy window into the issue of making preflop decisions, purely based on pot odds.

Villain opens the BTN for 3bb in a low-limit online cash game where stacks are 100b effective. We 3bet from the big blind to 10bb. Our opponent responds with a 4bet to 20bb. We have KsQs, and our opponent’s 4betting range is QQ+/AK. Call or fold? (Hint we would be investing 10bb into a total pot of 40.5bb).

We can deduce the pot odds offered by calculating which percentage of the total pot in which we are investing.

Here we are investing 10bb into a total pot of 40.5bb,which means we are being offered around 22.22% pot odds.

Now let’s calculate the pot equity of KQs vs Villain’s range of QQ+/AK.

If we were to base all of our decisions on pot odds, then we have a clear call here because we have more pot equity than pot odds.

But take a moment and think about the hand-vs-range matchup we are discussing here.

Which types of flops are good for us and why?

If our intuition is well-tuned, the problem should become quickly apparent.

Most of the flops that are decent for us give our opponent the potential to make even stronger holdings. 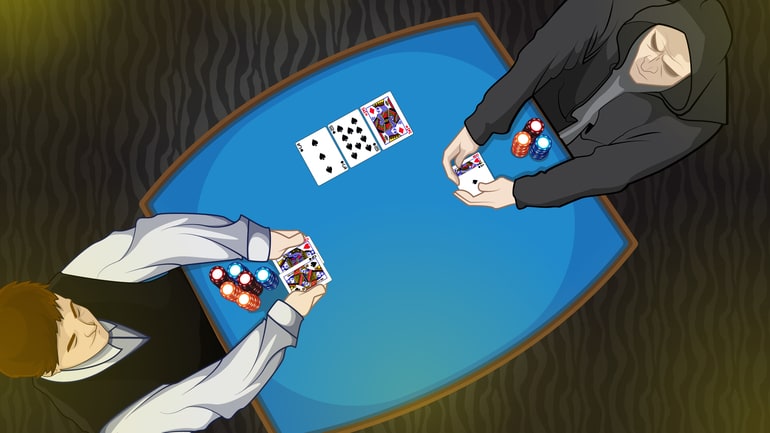 Due to the potential for domination, our equity suffers from serious playability issues. Poker is not as simple as looking at our equity preflop and deciding whether we have the pot odds to call.

In the above example, we get the direct pot odds to call but should likely still make the fold as a result of our reverse implied odds. Even high-profile players have been known to misunderstand this concept. Many players believe that any time we get the pot odds that our hand must be a call, in a given preflop scenario.

Unfortunately, poker is not that simple; we must always account for potential future action when making preflop decisions.

A lot of misconceptions exist out there regarding defending ranges against 5bet shoves when playing 100bb effective.

For example, check out the following myth -

It’s not too tricky to debunk this kind of idea. Imagine an opponent who calls 4bets extremely wide, but only ever 5bet shoves pocket Aces for value. We’d be able to 4-bet liberally for value but would typically fold absolutely everything when facing a 5bet.

So how do we know which hands we should be calling with when facing a 5bet?

The answer here is simple. We base our decision on our pot odds.

But didn’t wesay that pot odds are not the only thing that matters preflop?

We did, but we were discussing scenarios where there were additional chips to play with postflop.

When looking at preflop situations where our call is all-in, pot odds gives us the whole story.

We open-raise AKo on the BTN to 3bb.Villain 3bets from the BB to 10bb. We 4bet to 22bb, and Villain shoves over the top for the full 100bb stack.

At first glance, many players assume that this is an easy call. After all, we 4bet preflop for “value” and also have one of the absolute strongest preflop holdings.

Many players make the call and never question further.

Let’s take a moment and run the maths. We’d be investing 78bb on our call meaning we need more than 39% equity to have a profitable call.

Let’s imagine our opponent is shoving a range of JJ+/AK.

Now, it looks at first glance as if we have a call. After all, we said we need 39% equity, and we have 39.79%. However, it’s essential not to be hasty here. Firstly, we should note that the scenario is exceptionally close to break-even. It’s not a highly profitable slam-dunk preflop call. If our opponent’s range becomes even slightly tighter, then we are now in the territory of making losses.

But, this scenario is not the whole picture. We are in a low -limit online environment, which means we have a decent chunk of rake to pay. Assuming we are playing 30nl, it means that roughly 10bb will be deducted from the 200bb pot.

So, we are no longer investing 78bb into a 200bb pot but rather, 78bb into a 190bb pot. Our adjusted pot odds?We now need roughly 41% equity to make the call. The rake just incentivised a fold with our AK, even against a range of JJ+/AK. Our opponent would now need to be shoving wider for calling to be correct.

General Summary – When to Fold Preflop

Here are the key takeaways when thinking about whether a hand should be folded preflop:

Timothy "Ch0r0r0" Allin is a professional player, coach, and author. Since the beginning in 2006 he has built his roll from the lowest limits online without depositing a single dollar. After competing in some of world's toughest lineups (and winning) he now shares his insights and strategies with the 888poker magazine.
Related Content
Did You Know that a Sharp Poker Mindset Can Up Your Decision-Making Skills?