Rakeback is a percentage of rake paid which is given back to the players as a reward. It sometimes comes in the form of a VIP system. 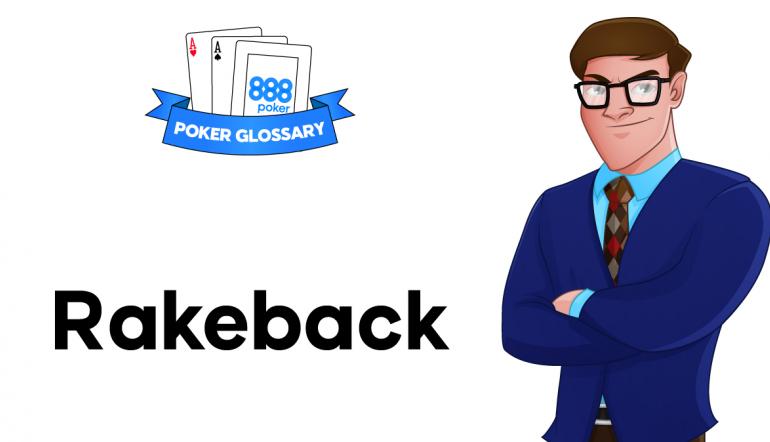 Rakeback is any type of reward that a poker room gives to its players for being regular members of their poker game. The rewards are taken from the rake that players have paid when playing, hence the name rakeback.

If a player gets ‘10% rakeback’ it means that they receive 10% of their total rake paid back as a reward.

Rakeback is not always called ‘rakeback’. For example, with the 888 poker club players receive rewards automatically in the form of freerolls, scratch-cards and gold tokens which can be used to purchase rewards from the store. The more we play, the more tokens we get and hence the more we can purchase from the rewards store.

How do I get poker rakeback?

Many poker rooms (such as 888poker) offer rakeback in the form of a VIP rewards system which every player is automatically a part of. Other rooms might require players to sign up through an affiliate (an agent or referring site) in order to get a fixed % of rakeback.

What Does it Mean to get a Percentage of Rakeback?

Getting 20% rakeback means we get 20% of all the rake paid given back to us as a reward. In some cases, players are told the percentage of rakeback directly. In other cases, where rakeback is given through a VIP rewards system it may or may not be possible to calculate the exact percentage. In some cases, rewards are based on a random element (such as a spin wheel) or a room’s appraisal of how valuable a certain player is to their eco-system.

What Is a Rakeback Grinder?

A rakeback grinder is a player who makes the majority ofhis profits through rakeback. Without rakeback, he would be break-even or slightly losing. Rakeback grinders are often considered to be weak players who make money purely by playing a large amount of tables. This is not entirely true though, rakeback grinders are actually above average poker players (since they are still making money overall). If a player is making profits even after rakeback, it means he is better than the average player in his games – the only reason he is not profiting directly is because the poker room is taking so much rake.

Is High Rakeback the Most Important Thing?

In short no – it is important to not compare rakeback percentages directly. For example, a room might offer a higher rakeback % but simply take way more rake to begin with, making it a less attractive deal. Also, rooms with an overly high rakeback offering typically attract a large amount of tough regulars. As a general guide, it is more profitable to be in a soft room with low rakeback as opposed to a very tough room with high rakeback.

Players should definitely look to take advantage of any additional incentives offered by their poker room. Some rakeback or VIP systems may be ‘opt-in’ meaning players are leaving free money on the table by not familiarizing themselves with what their room offers. While a high rakeback percentage is nice, it’s definitely not the only thing that should be considered when selecting a room.