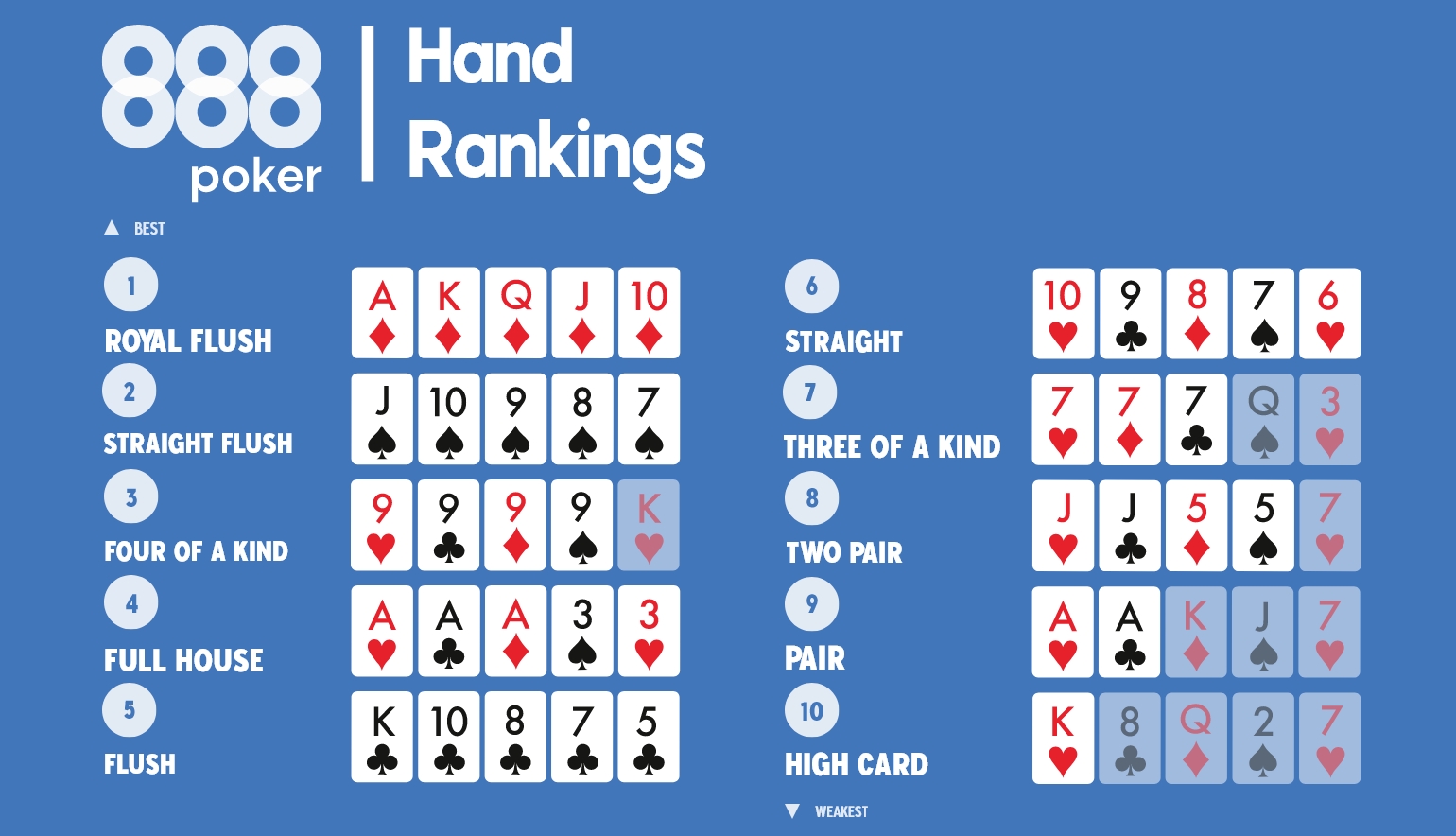 Poker Hands Ranked – What Beats What?

This complete list gives you the full rundown of possible hands in order – from the strongest to the weakest. Starting with the best poker hands, we’ll explain what each looks like and which other hands they beat.

Sitting at the very top of the poker hierarchy, you’ll find the royal flush. The strongest poker hand of all is a type of straight flush where you have A-K-Q-J-10 – all in the same suit.

What does Royal Flush beat?

As the highest poker hand, a royal flush beats every other hand your opponents might hold.

A straight flush is made up of five consecutive cards, all in the same suit. For example, 9-8-7-6-5 all in diamonds.

What does straight flush beat?

This beats all other poker hands, except for a higher straight flush.

A four of a kind in poker is simply four cards of the same value. So if you end up with 7-7-7-7-4 in your five-card hand, congratulations, you’ve got ‘quads’!

What does four-of-a-kind beat?

This is very often a winning poker hand, beating anything other than a straight/royal flush. If another player also has a four of a kind, the rank of the four cards will determine who wins. For example, J-J-J-J-4 beats A-7-7-7-7.

A full house poker hand is made up of a matching three of a kind together with a pair of a different value. For example, 10-10-10-8-8 – which is known as a ‘tens full of eights’.

Does a full house beat a straight?

Yes – a full house beats a poker straight. The only hands which can beat a full house are four of a kind, straight flush or royal flush. When two people have a full house, the highest three of a kind wins. If that rank happens to be the same, the one with the highest matching pair wins the hand.

A flush in poker consists of five cards which are all part of the same suit, but not in a consecutive order, such as A-K-8-7-3 in hearts.

Does a flush beat a full house?

If you have a straight, you’ll hold five consecutive cards which are not all the same suit. For example, 8-7-6-5-4 in different suits. The highest possible straight sequence is A-K-Q-J-10.

What does straight beat?

A poker straight always beats a 3 of a kind, two pair or a single pair. It does not beat a flush or better.

Just like its four card counterpart, a 3 of a kind consists of three cards of the same rank – for instance, your five-card hand contains 8-8-8-5-2.

What does 3-of-a-kind beat?

While it might not be one of the highest poker hands, 3 of a kind still beats two pairs, one pair and high card.

Two pair is exactly what it says on the tin – two pairs, each being a different rank. For example, 8-8-5-5-3 would be two pairs.

What does two pair beat?

Two pairs are better than one, so you’re sure to beat one pair.

One pair is simply two cards of the same value, such as having two kings in your hand.

What does one pair beat?

One pair can only beat a high card or a lower value pair. But if you bluff hard enough, it could still be a winning poker hand.

High card is the lowest possible hand, made up of five cards which do not produce any of the above.

What does high card beat?

If you end up with a high card, you need to hope your opponents have this too, as even a pair beats it. When your opponents also lack so much as a pair, the highest value card wins.

Poker Hand Rankings are essential when playing Texas Hold'em, Five Card Stud, Omaha, and your favourite poker games. Most players rarely get to form a Royal Flush, a Straight Flush, or Four of a Kind – they are scarce hands in competitions. But, sometimes, a lowly poker hand played right can help you take down monster pots. It's not always about what you're holding; it's really about how well you play the players!

Download our poker hand rankings cheat sheet PDF for a quick way to reference how your hand stacks up.

See your web story regarding this subject.