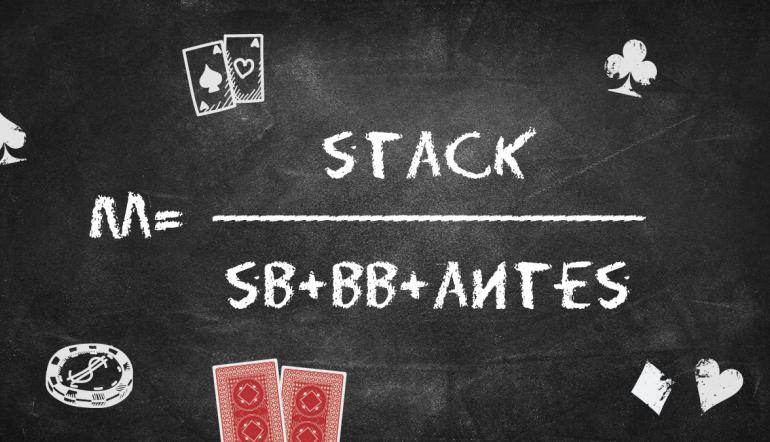 As tournament players, perhaps we sometimes feel pressured to make a move earlier in a poker tournament than we’d ideally like to. Maybe the situation is not perfect, but we’ve noticed the blinds-levels appear to be going up rapidly. Unless we take the current opportunity, we could easily end up becoming hopelessly short-stacked.

If we had the luxury of never needing to worry about running out of chips, perhaps we would have passed up on the marginal opportunity that faces us in favour of a much stronger situation.

Unfortunately, this is not how tournament poker works. We can’t go around playing individual hands in isolation. We have to seriously consider something that isn't a factor for cash game players - our tournament life.

The best decision at a tournament table is always going to take into account the effective stacks and the blind-levels. We are interested in how “healthy” our stack is relative to the blinds, which will help to dictate our strategy. If only there was a formula we could use to help us calculate this...

Actually, there is – it’s commonly referred to as “M-ratio” or just “M” for short.

The idea behind “M” is that it tells us how many rounds we will last given our current stack size and the size of the blinds/antes. 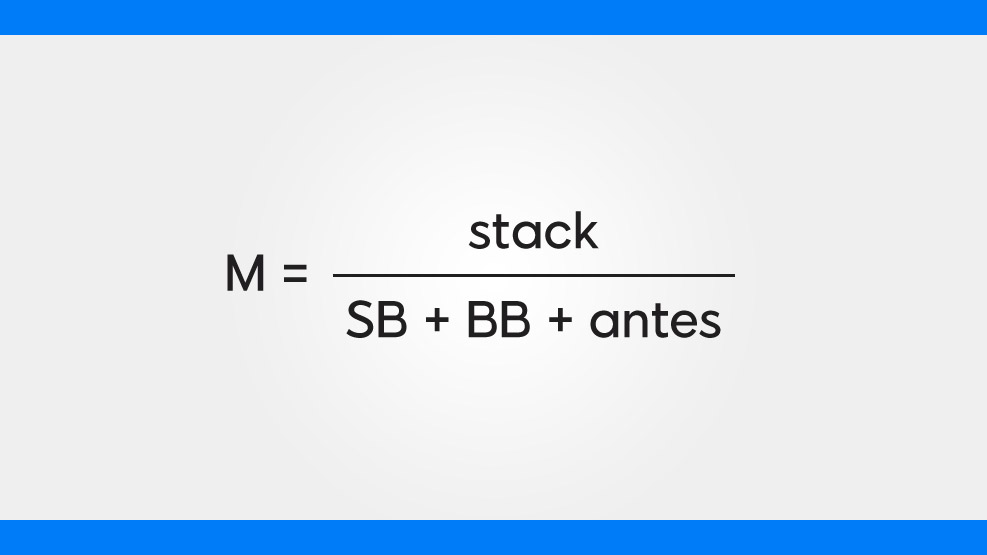 So let’s see if we can calculate our M for a simple tournament situation.

We simply need to add the relevant values to the formula. “Antes” stands for total antes that are played in a round and would, therefore, be calculated as:

An M of 25 essentially means that we can last another 25 orbits, assuming the structure of the hands remains the same. Which of course, it won’t, because soon the next blind level will arrive and our M will become considerably reduced.

We now have calculated our value for M, but on its own, it’s not going to be especially useful. How can we use our value for M to help us define our strategy in a tournament setting?

In his book Harrington on Hold'em, Dan Harrington provided some rough guidelines for how we should evaluate and use our value for M. He defined several zones in which the value of M may fall, and described what our resulting strategic outlook should be.

M is greater than 20 – The Green Zone – With an M larger than 20 we typically have the luxury to choose whichever style we prefer, whether that be a conservative or aggressive style. We have enough time to be patient and wait for strong holdings, but we also have the freedom to dabble with more speculative hands and play aggressively. Taking some losses is not a huge problem at this stage, and the effective stacks are still deep enough that we can get away with expanding our range in some scenarios.

M is 10-20 – The Yellow Zone – Now we are starting to feel the time pressure a little bit. We must start looking for spots to get involved and play hands. Some of the more speculative poker hands we may have been able to play while in the green zone may now suffer from reduced playability. This reduction is a result of the smaller effective stacks.

M is 6-10 – The Orange Zone – The pressure tightens here, and we want to avoid wasting any chips. Cold-calling starts to become risky. Our main focus should be trying to be the first player involved in the pot, wherever possible. If we are the ones open-raising, we have increased expectation as a result of additional fold-equity. This is valuable here since every chip counts.

M is 1-6 – The Red Zone – We have now reached what is known as the push/fold stages of tournament poker. We only have two options at this stage: Move all-in or fold.

M is less than 1 – Dead Zone – We should avoid this particular zone at all costs. Nearly everything is dependent on luck at this stage. We want our tournament career to be about skill, not luck. We should look for a spot where we are first to act and shove all-in, hoping to get lucky. Players have gone on to win big tournaments even after arriving at the dead-zone, so not all hope is lost. In most cases, though, our tournament life is over.

The M calculation works for tables of all sizes. The number of orbits we have left, won’t change hugely based on the number of players at the table. It will change slightly, since we will pay a different amount of antes, meaning we will have slightly more orbits remaining assuming the tables get shorthanded. (Usually the tables will get shorthanded only when approaching the final table. For the most part, we will be playing tournaments with max capacity).

To help us deal with this, we can make use of what is known as effective M, which takes into account the need to make faster decisions when the tables become shorthanded. We can refer to the standard value of the M calculation as simple M.

The relationship between the two is as follows: 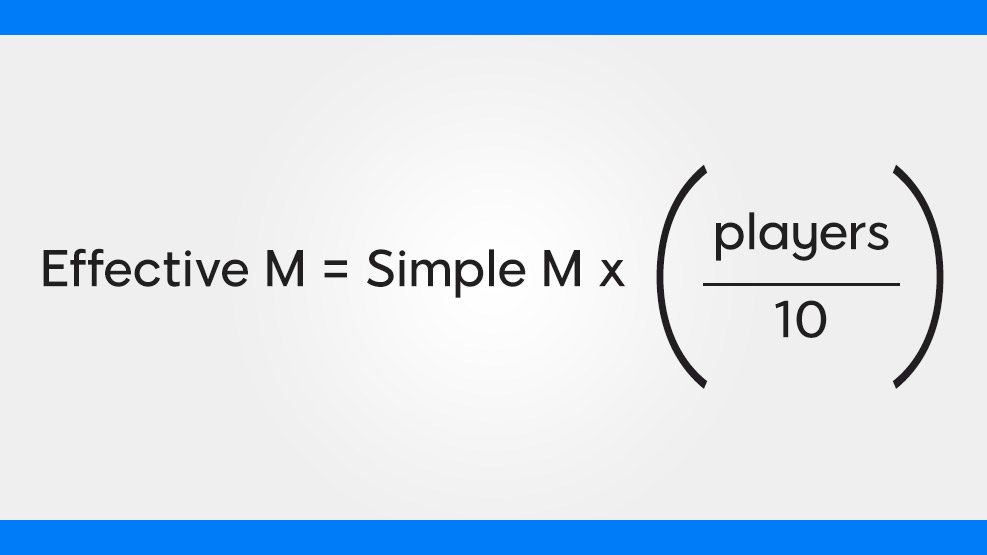 Essentially, we are taking a percentage of Simple M based on how “full” the table is, assuming that a full table contains 10 players. So if a player has a simple M of 10 on a 5-handed table, then he has an effective M of 5.

Let’s try a question to put everything together.

Okay, hopefully, you should be able to do this on your own. The calculation is below:

So the next time we are at the poker tables, let’s try to be aware of our M-ratio. Use it to help define the strategy we will be using at any given stage of the tournament.