What is Tournament in Poker?

A tournament is a type of poker format where players are eliminated (knocked out from the tournament) when they run out of chips. Prizes are awarded based on order of knockouts, with the last remaining player typically being awarded the top prize. Unlike cash games, tournament players cannot rebuy chips (unless it’s a rebuy tournament) and they are not free to leave or join tables whenever they feel like it. 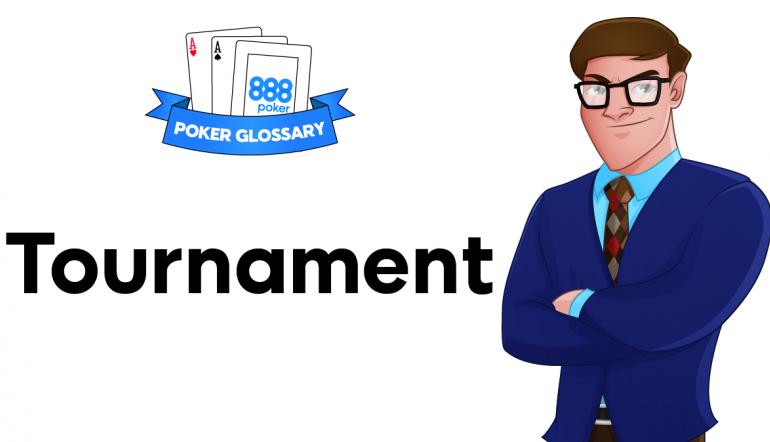 Unlike in cash games, players are not free to cash out or rebuy at any time. Tournament entrants continue playing until they run out of chips. Prizes are awarded based on the position a player finishes the event. While the last man standing wins the entire tournaments, prizes are often awarded to players who outlast the rest of field: 1st place, 2nd place, 3rd place etc.

Tournaments come in a variety of different styles with different rules and structures. Here is a short list of common structures -

Regular – Players buy in for an event that starts at a specified time. The prize pool is determined by the number of buyins. Payouts are usually awarded to several finishers.

Sit n Go – The primary difference between a regular tournament and a sit-and-go is the start time. Sit-and-go tournaments begin when a specified number of entrants has been reached. For example, in an 18-man sit-and-go, the event begins after 18 players have paid the buy-in amount.

Guaranteed – A guaranteed tournament is one where a certain prize pool is guaranteed by the establishment running the game. In the eventuality that there are not enough buy-ins to cover the guaranteed prize pool amount, the poker room makes up the shortfall.

Double or Nothing – These are a type of sit-and-go where exactly half of the entrants double their buy-in amount.

Knockout/Bounty – Extra cash prizes are awarded to players who eliminate either other players (knockout tournament) or a specified target (bounty tournament).

Winner Takes All – There are no prizes for second place here. The entire prize pool goes to the first place finisher.

Rebuy/Addon – This is a brand of tournament that allows players to rebuy their stack in the early stages (contributing to a larger prize pool). Rebuy tournaments often have an add-on period where players can purchase additional chips for their stack (usually at the end of the rebuy period). After the addon period, no further rebuys are allowed.

Hyper/Turbo/Deep – These are some of the expressions used to describe the structure of a specific tournament in terms of the blinds/ante payments and how long each level lasts for. The permutations are practically endless. See the glossary entry under structure for more information.

Example of Tournament used in sentence -> Tournaments typically offer much bigger payouts relative to cash games, but the variance in tournaments is also much larger.

How to Use Tournament as Part of Your Poker Strategy

For a start, not all chips are equal in tournaments. A technique known as ICM (independent chip model) needs to be employed in order to correctly assign chips a monetary value. Depending on the exact tournament situation it may even be correct to fold pocket Aces (in Hold’em) preflop as a result of ICM considerations. See the glossary entry under ICM and Bubble for more information on this topic.