888poker announces 7th edition of the popular Super XL Series, which for the first time will feature $5,000,000 in guarantees and run from January 19-31. 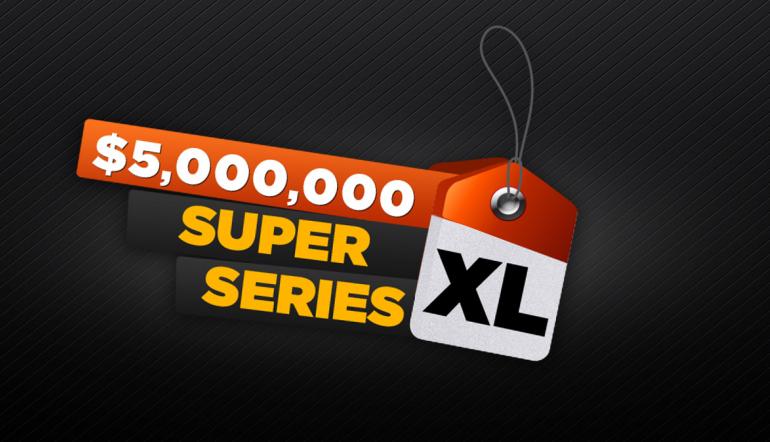 We at 888poker are proud to announce that we’ll be kicking off the New Year in style with the 7th edition of our popular Super XL Series, which for the first time will feature $5,000,000 in guarantees.

In addition, we will be introducing a Super XL Series leaderboard where the top 18 finishers will earn a seat into the Super XL Champion of Champions Event at 18:00 on Tuesday, January 31. The winner of that event will be awarded a full package to the 2017 World Series of Poker Main Event, while everyone in the tournament will receive a consolation prize.

“I'm excited that 888poker is pumping up the guarantees and putting more money into online poker,” said 888poker Ambassador. “It's awesome to have multiple series throughout the year that gets everyone on the virtual felts for a couple of weeks. The Super XL series is at the top of my list of must play poker events. Now I just need to win one!”

The Growth of the Super XL Series

Last September’s Super XL Series VI proved to be the biggest to date. All the guarantees surpassed by an average of 152%, which was impressive considering $4,000,000 in GTDs were offered.

Not too shabby considering four years earlier it started as a $600 buy-in, $500K guarantee only to evolve into one of online poker’s premiere events.

“I'm most excited about the Main Event,” said Moorman when asked which event he is most looking forward to. “It has a great structure and a wide range of different styles of players, which I enjoy. It's also great to have the chance of winning a lot of money for a relatively small buy-in.”

“I think it's great to see how small we started compared to what we have become now,” said 888poker Ambassador, Dominik Nitsche. “It truly has gotten better each and every single time, and I know because I played pretty much all of them. For me, as an Ambassador, I like that I am able to offer input directly to our Poker Manager who always listens to feedback. I'm very confident the next XL Series will even be better than the last one.”

For those who use up their two free tickets, fear not as you can earn more. Simply check your email within 48 hours to find a daily mission. Grab one extra ticket for every day you complete the mission.

Once again the “Crazy 8” tournament returns to the Super XL. This time the tournament, which emulates the starting stack and structure of the World Series of Poker’s “$888 Crazy 8s” event, will feature a $55 buy-in and be held in a turbo format.

“Without a doubt, the highlight of the schedule is going to be the last Sunday,” said Nitsche, who also revealed there’s a good chance he’ll be live streaming his High Roller play on Twitch. “Not just because of the Main Event, but also because of all the side events we got going on around then. It's by far the best day and certainly one you can't miss if you are serious poker player.”

Here's a look at the entire Super XL Series schedule:

Satellites for the Super XL Series, which start as little as 1¢, are happening right now. Log onto the 888poker client to win your seat today!