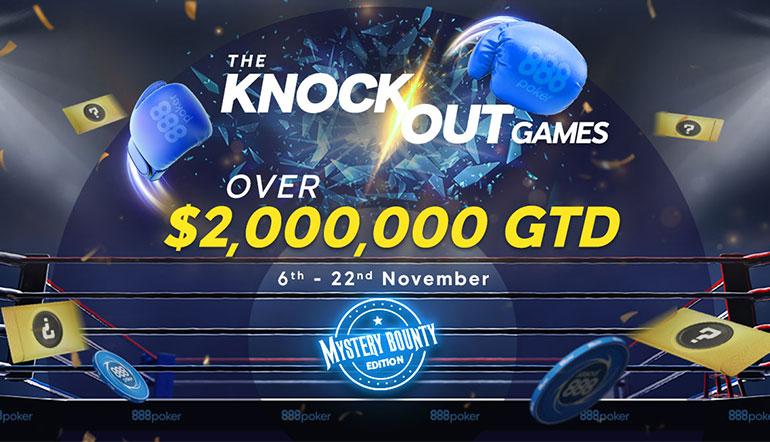 888poker’s popular Knockout (KO) Games Series returned on Sunday, November 6 and is slated to run for two weeks through November 22. There’s a twist this year with a special “Mystery Bounty Edition,” All tournaments feature a bounty component be they, Knockout (KO), or Progressive Knockouts (PKO).

All told, the 44-event series will offer more than $2 million in guaranteed prize pools across its affordable buy-ins. That includes the $250 buy-in, $500,000 GTD Multi-flight Main Event offering up a massive $50,000 top bounty!

Flights for that kick off on Wednesday, November 16 and run through Monday, November 21. Day 2 will take place on the same day at 20:00 GMT.

Catch all the tournament info here:

The series got off to a strong start as all four events from the first two days surpassed their advertised guarantees. All told, 2,177 entrants competed in the first four tournaments, awarding $208,950 in prize money. Thus far, winners have hailed from Ukraine, Chile, and Latvia.

Here’s a look at the early winners from the first two days of the KO Games.

That massive bounty wound up going to “fratla”, who failed to capture any prize money after busting in 238th place. But they walked away with the most money in the tournament, thanks to nabbing the $12,000 bounty.

The final nine players then went on an overnight break before returning on Monday and playing down to a winner. At the time, Germany’s “ZockSteffen” held the chip lead with over 3.2 million, while Romania’s “Blackjk84” was hot on their heels with 2.986 million.

“ZockSteffen” used their big stack to make it all the way to third place for $5,188.85 plus $464.10 in bounties. Ukraine’s “sezon1th” (one of those starting the final table in the middle of the pack) was left to do battle with “Arcuiro”.

The top 15 players got a piece of the regular prize pool, including the following players –

Amazingly, all the bounties were concentrated between the top five finishers. 888poker regular “kiskutya23” won the tournament for a $7,300.75 top prize plus $3,468.75 in bounties for a total payday of $10,769.50 But two other players banked more - thanks to collection the bigger bounties.

Make sure to tune in for massive giveaways on every stream!

You can also check out the 888pooker StreamTeam and ambassador Twitch channels throughout the series. They will be giving away freebies on top!

Click here for a look at the full KO Games schedule on 888poker!