The 888poker Super XL is Back and Better 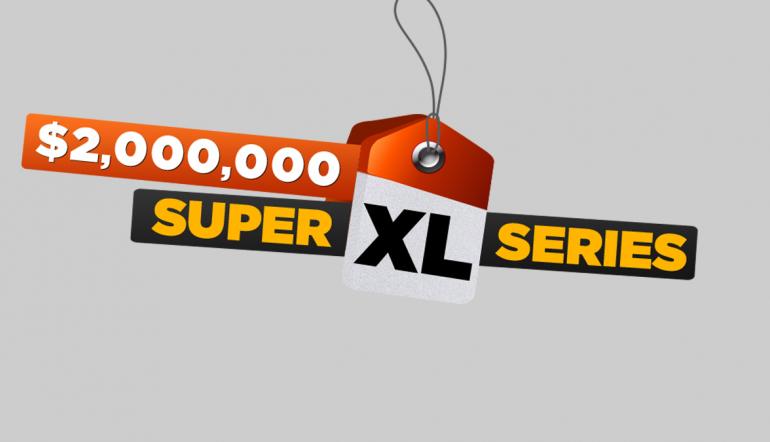 All told, the Super XL Series – which will offer a Main, Mini and Turbo version of each tournament – will see a staggering with over $2,000,000 in guaranteed prize pools up for grabs!

This marks the fourth year of the Super XL Series, and it follows last year's highly-successful series, one that saw over 60,000 satellites tournaments and over 1.5 million registrations. That led into what turned out to be a record opening event, which set the record for most players in a $100+ buy-in tournament on 888 with 1,559, nearly five-dozen players ahead of the previous record of 1,501 in the 2013 Super XL Series Opening Event.

With a little luck, that record will fall in this year's $160 buy-in $250K GTD Opening Event Multi Chance on Sunday, January 24.

This also marks the second year the Main Event has offered up a seven-figure guarantee. Last year's Main Event proved extremely successful on multiple fronts. First, it exceeded the $1,000,000 guaranteed prize pool to become one of the most successful online events in the site’s history. Second, the Micro Main Event had the highest number of players in the history of 888poker with 5,196 players.

The latest incarnation could be even bigger, and there's a good chance the Main Event will produce the largest prize pool in 888poker history!

In an effort to make the $1,050 buy-in to the Main Event affordable to casual players, 888poker is currently running a series of satellites with buy-ins starting at as little as 1¢. Additionally, players will have the opportunity to win a seat in the Main Event in one of two $215 mega satellites, which will be held on the first and last days of the series.

Each day of the series, which will see all events tagged with higher-than-usual guarantees, will feature a slew of unique tournaments. Fans can expect to see all 888poker ambassadors in action. So be sure to keep a lookout for Dominik Nitsche, Jackie Glazier, Nico Villa Lobos, Bruno Politano, Bruno Kawauti, Akira Ohyama, and Sofia Lovgren.

"I'm very excited about this year's Super XL Series, which in all likelihood will set records on 888poker," says Nitsche. "Very few online events are [a] "can't-miss", but the Super XL Series is definitely one of them. I'll most likely be playing in all the big events, and I'm expecting big things in the Main Event, which is going to be one of the best tourneys ever."

This year 888poker went above and beyond in creating the Super XL Series schedule. For example, tournament hours on Thursday are designed to fit the schedule of Latin America players, while the same can be said for Australian players on Saturday.

Furthermore, 888poker sought feedback from players on TwoPlusTwo, which led to numerous alterations, such as changing the 4-max event to 8-max since lots of players were displeased with the structure. They claimed it limited them from playing many tournaments simultaneously.

Finally, each event on the schedule will qualify players for a spot on the XL Leaderboard. At the end of the series, the top 10 will win cash prizes, with the overall point leader taking home a smooth $5,000!

Here's a look at the entire Super XL Series schedule:
888poker Ambassadors
About the Author
By
Chad Holloway