At the 2018 WSOP, the jewel in the crown is the Big One for One Drop with its $1 million Price tag. Follow along as Team888’s Dominik Nitsche takes you inside the Super High-Stakes action! 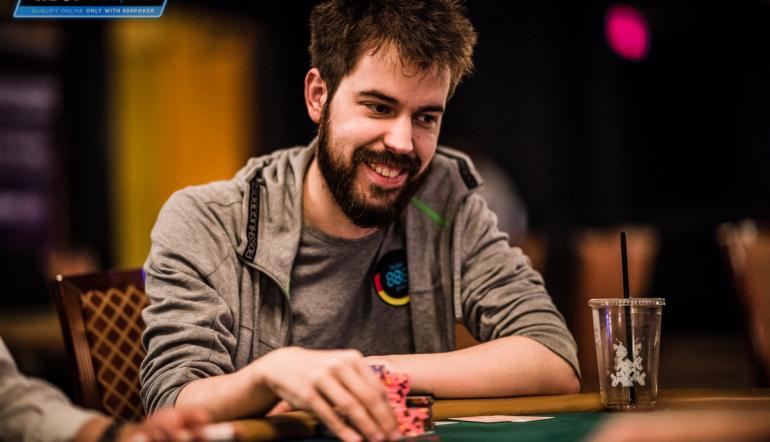 So, how does a mega-superstar poker player spend the day before playing the $1 million buy-in Big One for One Drop? Why, playing $25K and $50K High Roller events, of course! It didn’t go too well, but there was no time to worry about that!

For starters, he had to figure out how to store and move $1 million in cash to pay the buy-in. Like he said, "Germans only deal in cash." Best way to handle that is to use safety deposit boxes. But as you can see in the video below, it's not that easy to squeeze so much money into one of the smaller boxes at the casino.

Perhaps we need a bigger one next time, Dom?

Dominik next had to concentrate on collecting and transferring the balance of the $1,000,000 buy-in to the tournament of a lifetime – the Big One for One Drop. No easy feat when you have to transport hundred dollar bills and chips in a back pack!

Once that was done, he could focus on the day ahead and what could have been the biggest win/cash of his career so far.

“The only thing I hope is that I get a really good table.”

And, so go the words of every wishful-thinking poker player. Unfortunately for, Dominik it was not to be.

In the early stages of the event, he found himself sitting next to the likes of Fedor Holz, Daniel Negreanu and Erik Seidel. Nice!

But, Dominik Is a trooper and decided to go with the flow, play relaxed and most importantly – play his game.

In one early Day 1 hand, Cary Katz raised from early position, and Dom flatted on the button with pocket fives and about 100bb behind. Both blinds folded. The flop was a non-descript J-7-2.

Cary gave a speech that Dom’s going to call any bet. So, he’s going to bet big – which he did and, of course, Dominik called – also knowing that Cary is capable of c-betting with anything.

The miracle 5 on the turn brought instant relief and satisfaction to Dominik’s hand. According to Dominik, Cary would continue betting for protection in this spot. He also thought that this would be a good time to raise him because of the double-suited board.

Dominik raised Cary’s 500K turn bet to 1.8 million. Cary thought for a bit before calling. The river paired the board with an off-suit Jack – giving Dom, fives-full. He moved in for his remaining 2.8 million in chips and Cary quickly folded, claiming he had a pair and the nut flush draw.

Thoughts, Reflections but NO Regrets

Day 2 wasn’t as kind to Dominik, and he found himself losing ground as other players donated chips to the behemoth of a heater – Justin Bonomo.

With 45bb remaining in his stack, Dominik looked down and saw a Q in his hand – matched up with an A.

“Certainly, no regrets on this hand… The only way I could ever do something is if Justin would never, ever re-raise me light – which just is not the case.”

Again, Dominik emphasised the importance of knowing your opponent. Although he had the incorrect read on how strong Bonomo was, he believes it was the right play.

Any parting words of wisdom, Dom?

“There’s always something to learn. I have things to learn, so you probably do too.”

We’d have to add a resounding, Amen to that!

(All Dominik’s quotes are in bold italics.)

Dominik Nitsche
888poker Ambassadors
About the Author
By
Hyacinth Swanson