From October 5-16, the 888Live Series is headed back to Aspers Casino for the 2017 888Live London Festival, which will feature $800,000 in guaranteed prize pools across ten events. 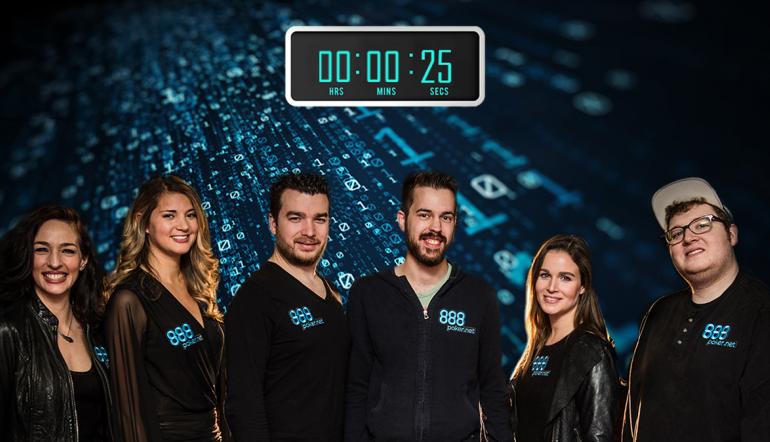 From October 5-16, the 888Live Series is headed back to Aspers Casino for the 2017 888Live London Festival, which will feature $800,000 in guaranteed prize pools across ten events.

In two of those events – the £1,100 buy-in, £400,000 GTD Main Event and £2,200 buy-in, £50,000 GTD High Roller – we will be introducing the 888action Clock, thus becoming the first European tour to implement an action clock in events with big fields comprised of recreational players, online qualifiers, and poker pros.

The introduction of the action Clock, which was announced earlier in the summer, is in line with our new strategy and tagline to “take back the game” for players by preventing rampant stalling and encouraging a faster-paced gaming environment.

How the 888 Action Clock Works

Here’s how it’ll work. In every hand, the dealer will operate an action clock. Each player will be given a certain amount of time to act. If a player is facing a bet or raise, the timer will begin only after their chips are counted and the amount of chips required to call are stated. Players must act within the allotted time, or their hand will be declared dead.

Players will also be given a predetermined number of time extensions, which will allow them an extra thirty seconds to act in those situations that require a bit of extra time.

Click here for a look at the full 888Live London Festival schedule.

“As a huge influencer in a fast-evolving market, it’s important that we listen to our players in order to enrich their experience in the most innovative ways possible,” says SVP Head of B2C at 888Holdings, Itai Pazner. “We believe that implementing Action Clocks in our 888Live Festivals is one more step towards us improving our games through cutting waiting times and creating a more even-handed poker experience.”

The discussion over poker action clocks has waged for many years, but it seems more and more players are coming around on them. Dutch Boyd, Bryan Paris, and Jon Camsell were just a few players who expressed their approval when we first announced a action clock would be used at 888Live Festivals.

A few weeks after the announcement, the World Poker Tour (WPT) even announced that they would be expanding their action clock, which had previously only been used in the WPT Tournament of Champions, to all its Main Tour events. The expansion of an action clock to both 888Live and WPT events are a truly a testament that players enjoy a faster-paced game.

John Scanlon, Head of Poker at Aspers Casino, is also a supporter of the action clock: “I’ve always been a fan of the action Clock, so when 888poker suggested adding it to the Main and the High Roller Events at the Festival I was fully on board.”

He continued: “I’d like to assure everyone coming to play the event that adding the action Clock is not about putting players under unnecessary pressure; it’s about keeping the game running smoothly and ultimately providing all players involved with a better structure and overall experience. We always put the player at the center of everything we do at the 888poker Room at Aspers Casino, and we believe that players will really enjoy this addition to our ever-evolving customer offer.”

888 Action Clock: What to Expect

One player who’ll be in attendance that has action clock experience is 888poker Ambassador and three-time World Series of Poker bracelet winner Dominik Nitsche, who was subject to an action clock in the 2017 Super High Roller Bowl.

However, other players will be exposed to it for the first time including defending 888Live London Festival Main Event champ Ka Him Li, who topped a field of 288 entries to win £45,300 after a heads-up deal with Shah Raza.

Likewise, if French player Eric Le Goff, who won the High Roller for £30,000, is to defend his title, he’ll have to do it while facing the 888Action Clock while other 888poker Ambassadors Kara Scott, will be experiencing it for the first time.

If you have an opinion on the action clock in poker, be sure to let us know on Twitter using #888ActionClock.