888Live Local touched down again at Aspers Casino for 4 days of Main Event poker heaven. Players came out in droves for a shot at the £88K guarantee. 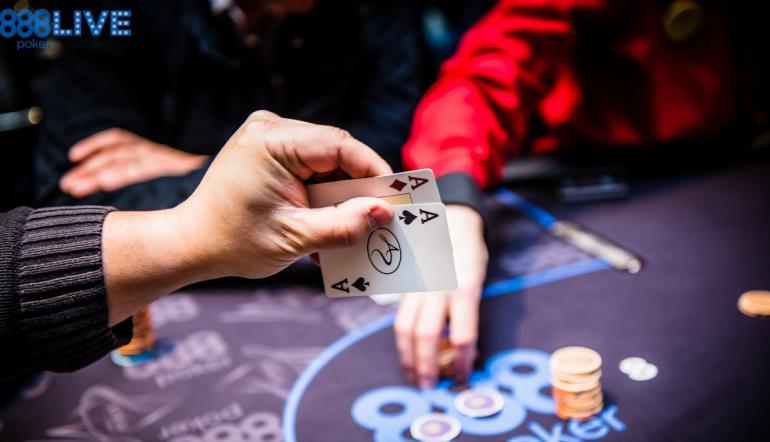 The 888Live London Local Main Event had three Day 1s starting on Thursday 28th July through to Saturday 30th with the final day on Sunday 31st when cards were in the air at 1pm to play down to a winner.

The event attracted 564 entries (11 of whom qualified online) in total generating a prize pool of £111,870, which easily surpassed the guarantee of £88,000 proving again how popular the monthly event is becoming, and how well the synergy between the live play experience and the 888 brand is working.

Many players had satellited into the £220 buy-in event both live and online giving a wide range of players the shot at a big tournament where a starting stack of 25,000 chips gave them ample scope to play.

The original entrants were whittled down to the final 86 for Day 2, and the first order of business was to burst the money bubble. With 63 players set to get paid and a min-cash worth £410, there was tension in the air as play began.

There was a flurry of bust outs as the short stacks tried to double up and soon there were just 64 players left, and action went hand-for-hand across the remaining tables.

Amar Al Hussona started the day with 70,000 chips but never took his seat. He was blinded out and eventually he was the bubble, the last player to leave empty handed and everyone else was in the money. A Slightly anti-climactic bubble perhaps but the remaining players cared not one bit.

The final day was notable for a lot of table talk and chief amongst the big talkers were the excitable Deividas Peleckas, the sardonic John Ventre and motor mouth Pete “The Cabby” Burgon. This was not a final day for serious faces even though it was for serious money. The players were determined to enjoy the day playing the game they love, and that’s exactly what they did.

The chatter did get noticeably quieter however as the game moved to two tables with Burgon and Ventre eliminated, and the final 18 as the serious money came into play.

The players were steadily eliminated, and soon the official final table of nine was set.

Road To A Champion

Andrew Sotiriou was eliminated in 9th when he went all in on the flop holding KcTc for a flush draw on a board reading 6h5c4c. Sam Acheampong called with his KdKs, and it held as the turn was the Kh and the river the 9h.

Andreas Constantinou was next out as two short stacks collided. Gary Miller shoved holding 4c4h and Constantinou called with KcQs. The board ran out 4c4dAs9c3h. Death by quads for Constantinou and some much-needed chips for Miller.

Sam Acheampong then doubled up Miller when his Aces were cracked by his King-Jack. Acheampong was slightly stunned but took it in good grace. Soon after that though Acheampong doubled up Andrew Abernethy when his tens were out flopped by the nines of Abernethy in a very frustrating few hands for the big man.

In the next level, however, Acheampong would have his revenge. Miller opened and then called a shove from Acheampong. Miller had 8h8c, and Acheampong tabled Ad3d. The board ran out Jh5d3c3hTd to double up Acheampong with a flush and put the hurt on Miller.

Not too long later it was Miller all in and at risk with Jh8c called by Deividas Peleckas holding AcJs. A runout of 6hQc8d8h7d had the table scratching their heads at what they had to do to bust a short stack. It was approaching 1am with seven players left and nobody in the mood to make a deal.

There followed a series of uncalled all-ins before Andrew Abernethy shoved with KhQc and got a call from Miller with AsJh. The board ran out Ks5s5hAc9d and Abernethy was eliminated in 7th place.

On the next hand, GeorgeTitoiu shoved his short stack from the button holding Qd3h and Miller was priced in to make the call with 6d2d. The cards ran out 2s5c5dAdKd with a flush for Miller knocking out Titoiu.

Shah Athar was out minutes later as the rush of exits continued. He moved in with Kh5h and Acheampong called with Ah4c. The best hand held as the board came 3dAd9h8c5c.
Minutes later Acheampong raised and called a shove from Peleckas. It was the AcKc of Acheampong versus the Ad6d of Peleckas. Once more the best hand started holding up on a final board of 3cQdJhAs9d.

Barely five minutes went past before Ning Lu fell. He reached the river of a board reading Ah9c4sQcJh and moved all in against Miller. Miller took a long time to decide, and Lu called the clock on him. Miller called with Ad8c and Lu had to show his brave bluff with 7d5d.
Closing in on 2am it was heads-up for the title between Acheampong with 6,225,000 and Miller with 7,870,000.

Acheampong may have started with a slight disadvantage, but after a few swings, either way, he took a decisive lead after a succession of good hands and good calls. On the final hand Acheampong raised from the button and Miller called. They saw a flop of 6sAd3d and Miller shoved. ,

Acheampong decided to go for it and called. Miller was ahead with Kc6d against the 3c2d of Acheampong. The turn card Tc was no good but on the river the 2c gave Acheampong the winning two pair hand.

It was a crazy final table with plenty of hands coming from behind to rescue players, but each had their share of luck along the way, and the weary competitors embraced before Acheampong was presented with the winner’s trophy and a cheque for £21,950.

About the Author
By
William Powell 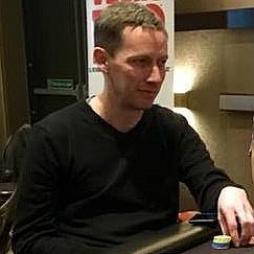 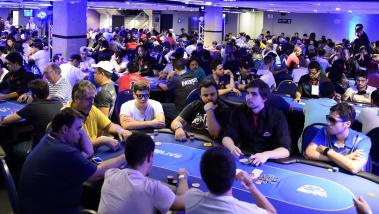