888Live headed to the Costa Brava for an unforgettable poker fiesta. With a $50k GTD Main Event and fun beach activities, this was one not to be missed.

May 23 2016
Live Events
Lloret de Mar was the destination for 65 online qualifiers from around Europe for an unforgettable poker holiday on the Costa Brava from the 18th to 22nd May, courtesy of 888poker.
A mix of satellite winners, some of whom had freerolled into the event, social media winners like Paul Jackson and other specially invited guests and VIPs were all in Spain to enjoy four days and nights of fun sun and, of course, poker.
The overall package laid on by us for this “Poker Fiesta” included four nights at the luxurious 5 Star Guitart Monterrey Hotel with $450 for travel and spending, entry into the $50,000 guarantee 888Live Costa Brava Main Event, and a $5,000 Bounty Tournament Freeroll. In addition, there were specially organised beach activities and, to round it all off, a farewell VIP party at Disco Tropics.

There were many stories of how the players arrived in Spain, for example, Chuck Khuu won his package while playing online at 888poker on Valentine’s Day. He promptly presented the trip to his girlfriend as a romantic gift.
Pete Talbot, a sales manager from London, found himself at a loose end in Aspers Casino Westfield London one afternoon. Although he is mainly an online player, he entered a live satellite and several hours later had bagged himself a ticket.
Edijs Tevins was one who had freerolled to his package and ended up cashing in 8th place for a very nice €2,300. 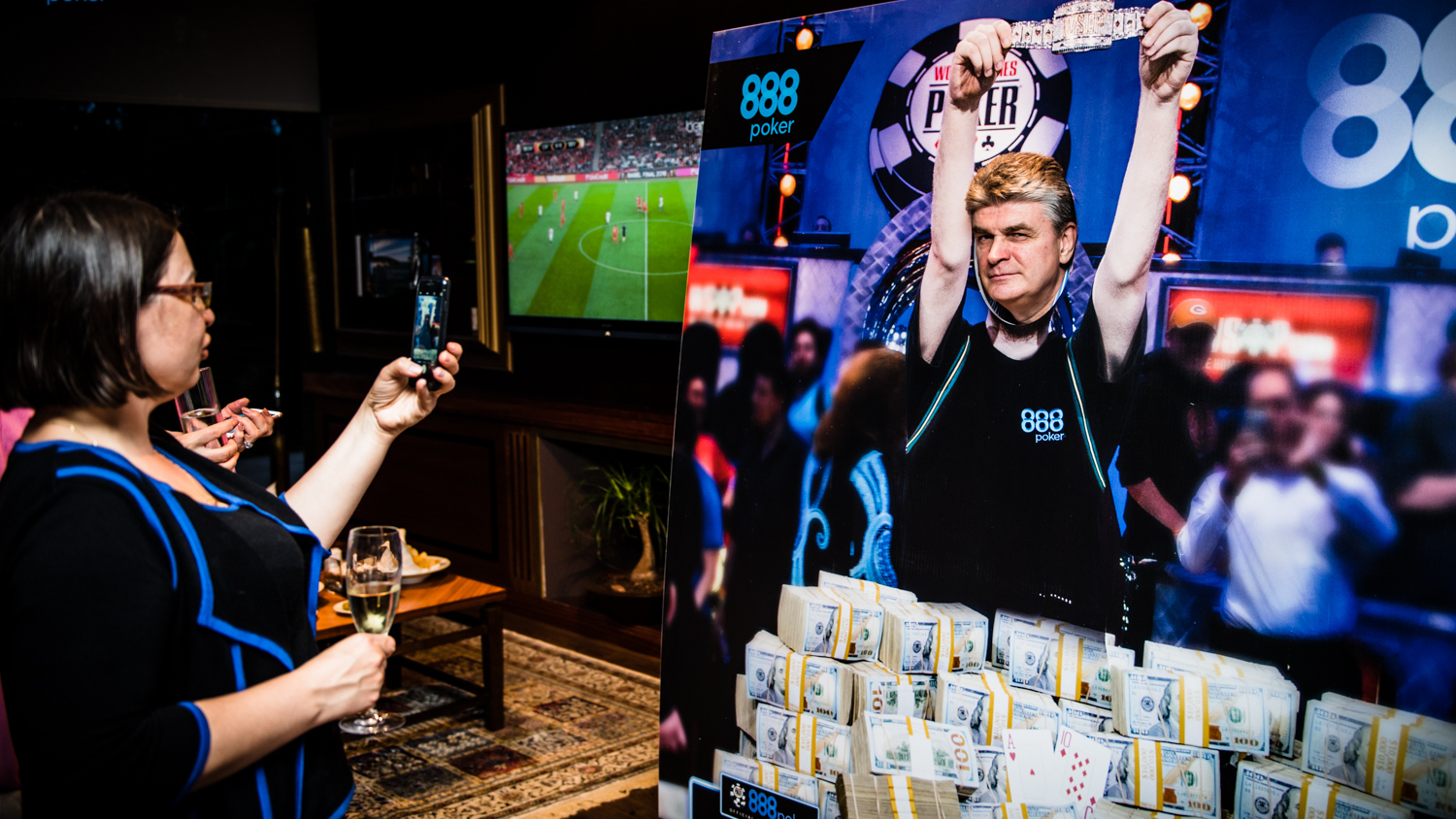 Players and guests arrived on Wednesday and picked up their welcome packs, including an 888Live backpack full of goodies before a champagne reception in the evening where 888poker Ambassador, Kara Scott, welcomed the group.
The drinks were flowing and the Europa League Final was on the big screen. There was also the chance to win a trip to Vegas by taking a winners pic in a cardboard cut-out of 2015 WSOP Main Event champion, Joe McKeehen. 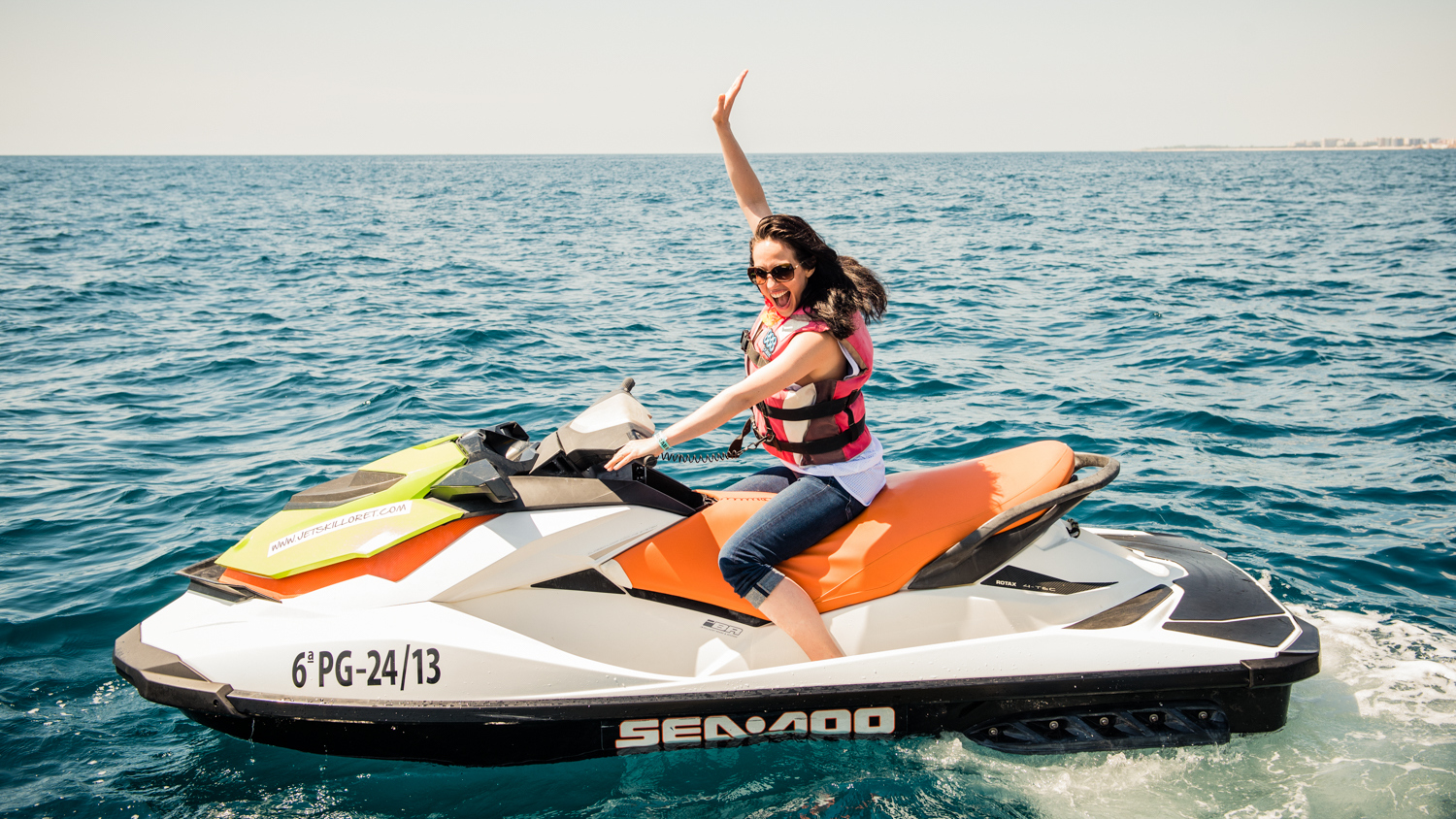 Fun In the Sun

The next day saw an early start as a group of 50 headed to the beach for some specially laid on fun by the seaside, including Banana Boat rides, Fly fish rides and Jet Skiing.
After some lunch and a quick siesta, there was an afternoon off to explore the bustling town before the player’s guests were invited to try their luck at a Main Event Satellite Freeroll.

The satellite to the next day’s Main Event attracted 130 runners including a number of local players keen to get in on the action. With one rebuy and one add-on allowed, it was a hotly contested and variance-heavy tournament. It was close to 2am when the tournament drew to a close and nine tickets were awarded.
Friday morning was a chance for the players to relax, explore the town or hit the beach again as the sun was out and the temperature rose. Later that evening, the Main Event got underway. 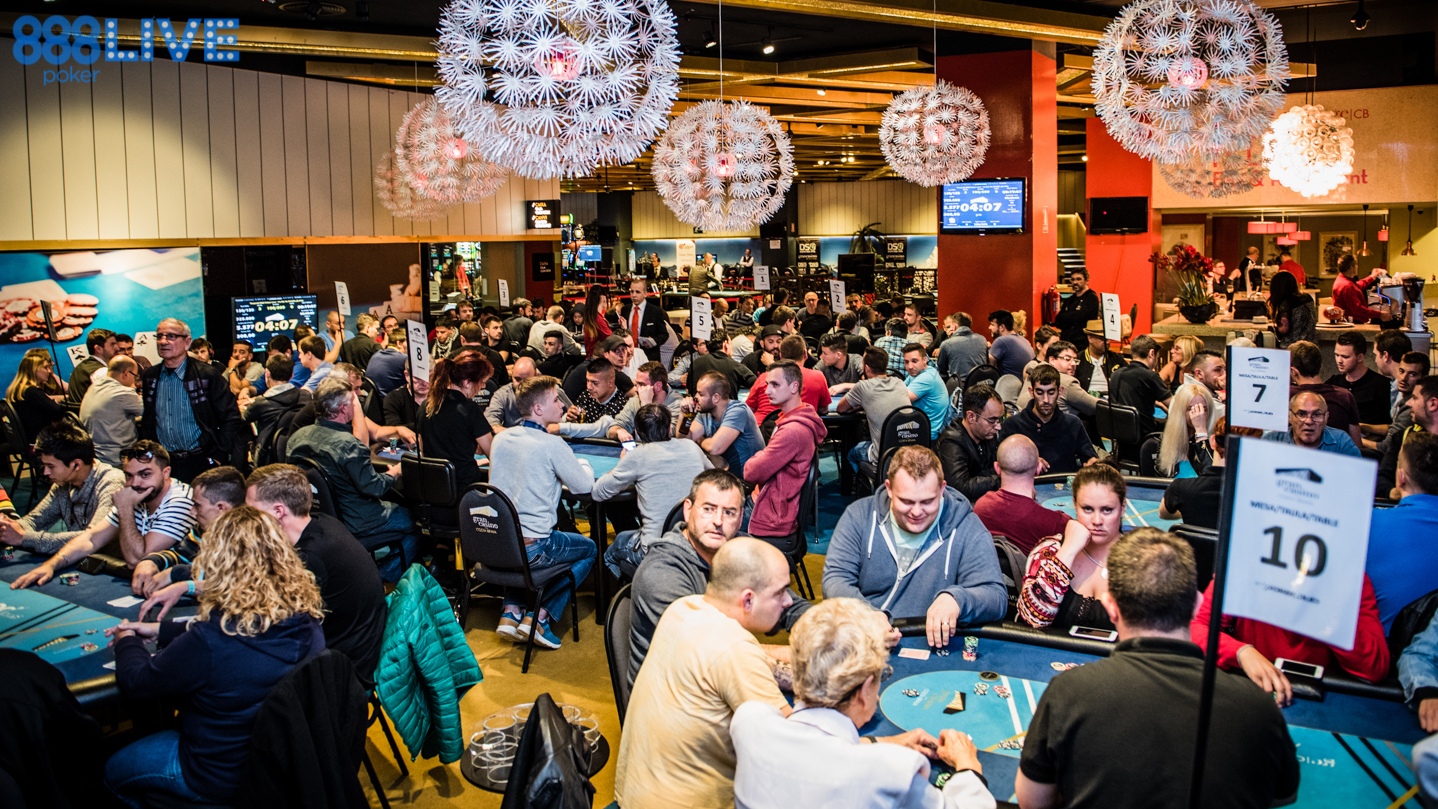 Kara Scott welcomed the assembled players and gave the traditional cry of “Shuffle up and deal!” as 108 players took their seats. That number would grow to 165 by the close of registration, comfortably exceeding the number needed to meet the $50,000 guarantee.
With a starting stack of 25,000 chips and 30-minute blind levels starting at 50/100, there would be plenty of play in the fourteen levels on Day 1 of the tournament. There would also be plenty of fun and spot prizes to match the party atmosphere in the poker room in the early levels. An 888poker branded Bad Beat Can was opened by one unlucky player who had his aces cracked by a flopped set of eights. Inside was a miniature of vodka that he downed to relieve the shock.
A rather more enjoyable spot prize, a pair of wireless Sony speakers, was won at the end of level 2 when Adrian Nunez Paradelo made a full house holding 8s5s on a final board of 4d-5c-8c-8h.
Just after 1am, the day came to an end, and 58 players bagged up chips to take through to Day 2. Local player Juan Lupol was the end-of-day chip leader with 238,000 while Kara Scott ended with 72,100, which was an average stack. 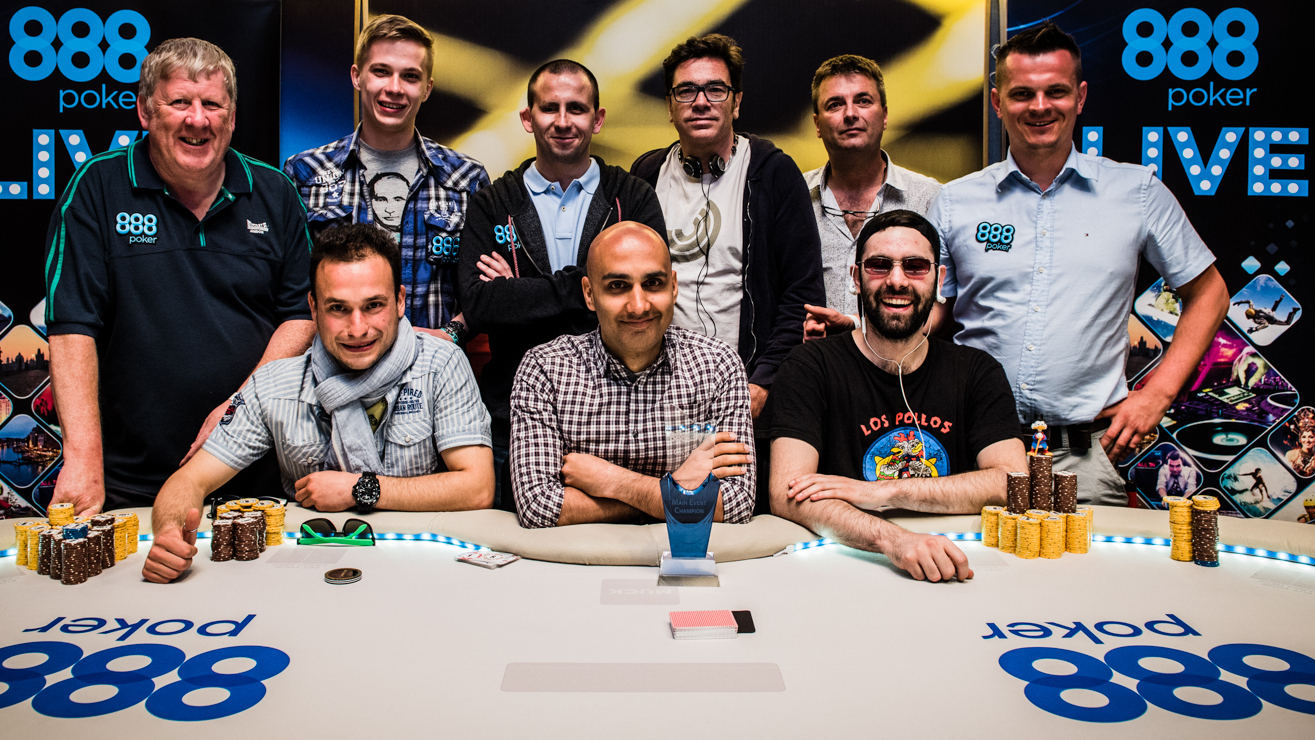 Cards were in the air at 5pm on Saturday as the 58 returning players got ready to play down to a winner at the Gran Casino Costa Brava. Action is often described as fast and furious in poker reports, but this really was no exaggeration.
Kara Scott was one of the early casualties when she went all in with 9c9s and was called by Chuc Khun holding JhJc and Craig Newton with AhAc. The board ran out Qh-2d-8c-4d and Newton killed two birds with one stone to set the tone.
The bubble was for 19th place and the pace of exits meant that it was reached in close to three hours. Andrei Kolotov was the unlucky player when he moved all-in with AsKc and got called by AcQc. The board ran out 8c-Jh-5c-2d-2c to make a flush on the end. Kolotov was presented with a pair of Sony wireless headphones as a consolation prize.
Just over four hours later the final table of nine was set:
Final Table of Nine Manuel Cabello Florensa Takes It Down

The tournament was eventually heads-up between Manuel Cabello Florensa and David Nunez Arguello just before 2am. Playing fairly even stacks of 20 big blinds, all the chips went in the middle on a board of 5h-2d-9s.
Arguello tabled Qh9d but Florensa had his man with Kd9c. The turn card 4h and river 9h sealed the deal and Florensa was the champion.
Florensa is from Catalonia and won his seat online at 888poker.es. Speaking after his victory a delighted Florensa told us that this was by far his biggest live cash, but he is a big winner online at cash games and MTTs.
He came to the table as one of the shorter stacks, but was happy with the way he ground his way up. Asked what he was planning to do with the €11,000 first placed prize, he answered, “Use it for my poker bankroll.”
Spoken like a true player. 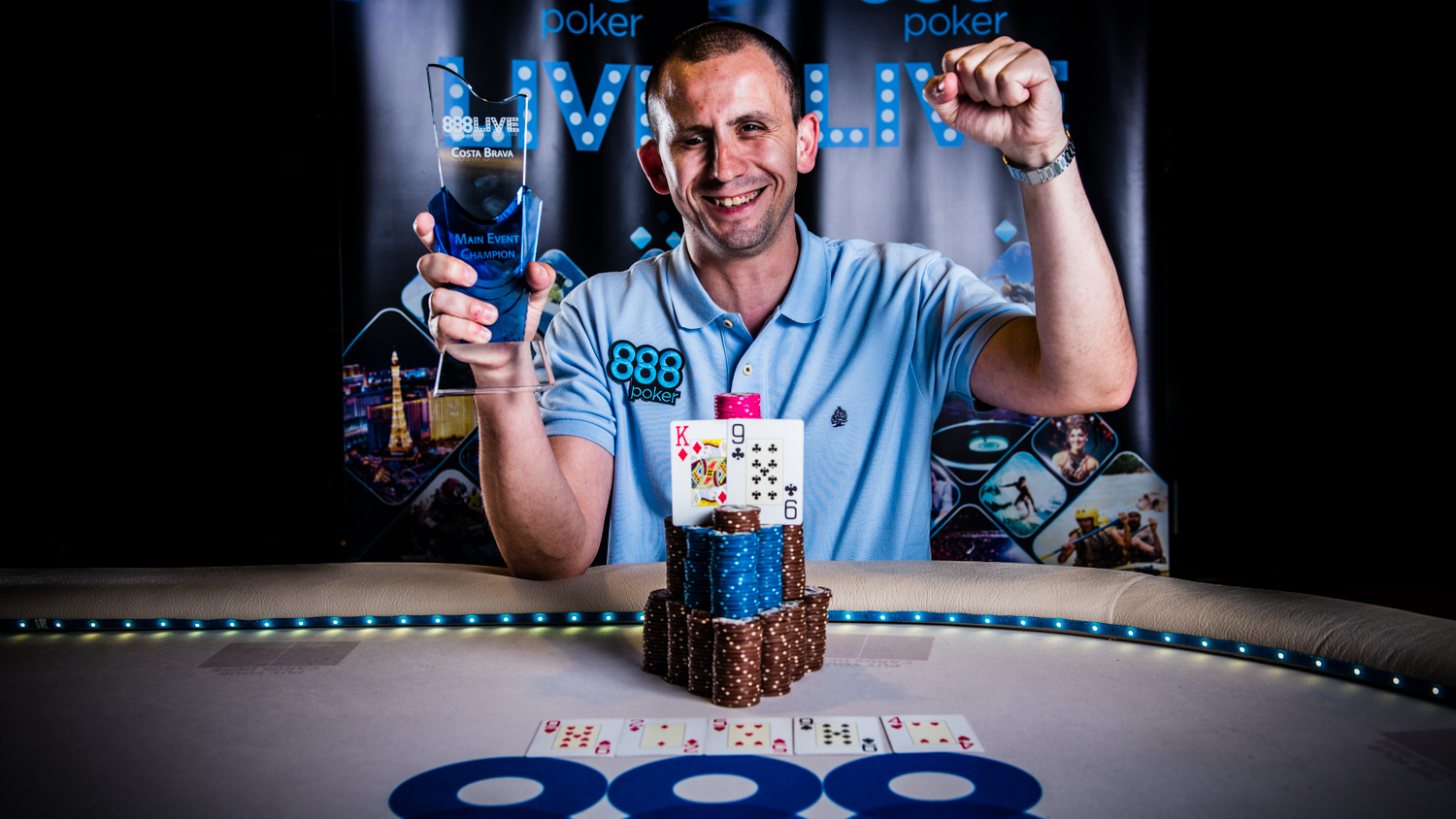 888poker Ambassadors
About the Author
By
William Powell