A bum hunter in poker is someone who only plays against weak opposition (usually heads up poker) and sometimes actively stalks weak opponents. 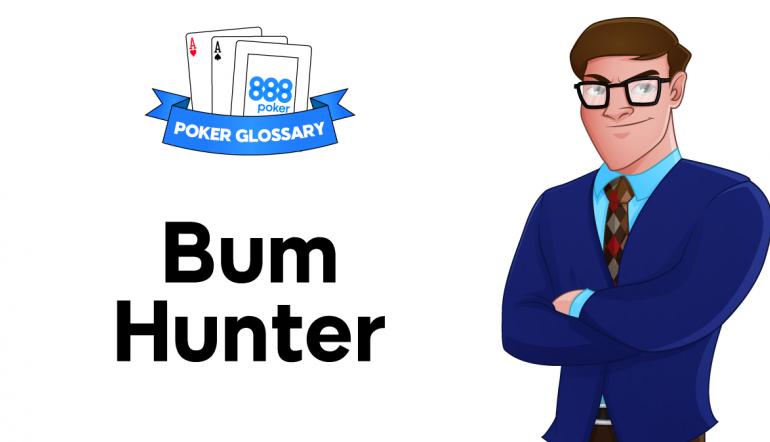 A bum hunter in poker is someone who only plays against weak opposition (usually heads up poker) and sometimes actively stalks weak opponents.

It is considered a type of predatory behaviour and is discouraged by most poker rooms.

Although bum hunting can potentially earn poker players a ban from the room, the line between bum hunting and good game selection is generally quite blurred.

Is Bum Hunting Against the Rules of Poker?

There is nothing explicitly in the poker rules that prevents bum hunters. In fact, good table selection is encouraged for serious poker professionals. However, poker rooms often consider bum hunting a type of predatory behaviour and have been known (albeit somewhat rarely) to ban bum hunters from the poker room.

Can Poker Bum Hunters Be Banned?

Yes, although it doesn’t happen too often. It’s quite difficult for a poker room (or anyone for that matter) to draw the line between bum hunting and table selection so it’s hard for a poker room to prove that a player is bum hunting. Bum hunters often get banned for violation of other site rules such as use of seating scripts and grimming.

Where is the Line Between Bum Hunting and Table Selection?

The line is blurred although it’s worth noting that six-max and full-ring players virtually never get accused of bum hunting. The term bum hunter is almost exclusively applied to heads up players. As a rough guide if a player is a) refusing to play against anyone but huge fish and b) sitting idly in the lobby waiting for soft targets to show up, he has probably crossed the line into bum hunting. This is especially true if the player is making use of seating scripts which are against the terms and conditions of many poker rooms.

Is Bum Hunting In Poker Unethical?

It generally depends on your point of view. Most would say yes. It’s discouraged by poker rooms and frowned on by the poker community at large. Having said that, others might just view it as good business and have the viewpoint that it’s unethical to let the fish keep their money.

It’s always going to be a point of contention if poker rooms try to directly ban players that they suspect of bum hunting. In more modern times poker rooms have used other techniques to discourage bum hunting such as hiding opponent screen names until after a player has posted the big blind. Other techniques include offering fast format poker games (such as SNAP poker) and limiting the use of poker HUDs.