What is the Button (BTN) in Poker?

The button is the most profitable seat at the poker table. It's to the right of the small blind (SB) and to the left of the cutoff (CO). 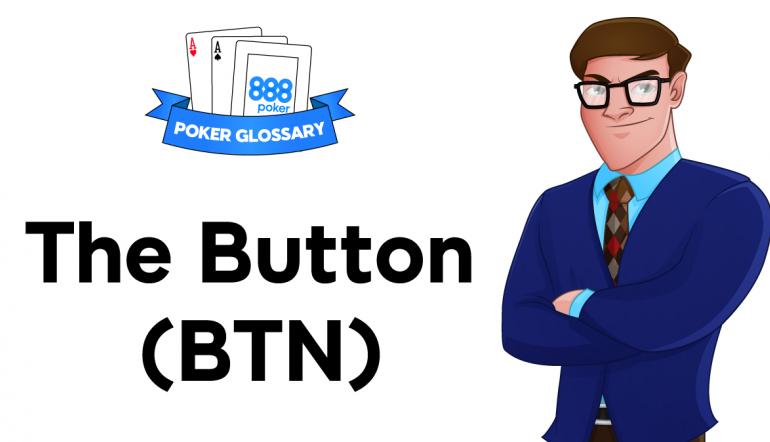 In poker the button(BTN) is the best possible seat in poker since the player occupying this position always gets to act last after the flop (known as being in position).

The term button also refers to a small circular object at the poker table that marks the position of the button seat.

Why is the Button so Profitable in Poker?

The button is the most profitable seat in poker for two key reasons. 1. We are guaranteed to be in position (act last postflop). 2. We are in an excellent spot to take down the blinds preflop if it is folded around to us. Even if the blinds decide to enter the pot we are guaranteed position postflop. The majority of a good player’s winrate will come from the button.

Why Does the Button Not Act Last Preflop?

How Many Hands Should We Open Raise on the Button?

How Should we Play Against Open Raise from the Button?

If we are facing a button open raise it means that we are in either the small blind or big blind positions. Since the average player is going to be raising a wide range (perhaps 50%) of holdings from the button we should look to defend aggressively from the blinds. This involves re-stealing (3betting) aggressively from both positions and cold calling a wide range from the big blind position. (Don’t cold-call too much in the small blind since the big blind can make it non-profitable for us by squeezing aggressively).

Do All Poker Formats have a Button?

Not all poker formats make use of a button to determine the betting order. The most common example is Stud variants of poker which base positions purely on the strength of players’ up cards rather than the position of a button.

The button seat is also known as the dealer position. Traditionally the player occupying this position should deal the cards for each player at the table. In most cases this does not happen however for the following two reasons. 1. Casinos and poker tournaments generally have a designated dealer who is not part of the game itself. 2. In home games, one person might be better at handling a deck of cards and offer to deal all the hands. One advantage of rotating the dealer in competitive home games is that it helps to keep the game fair and minimize the impact of any dishonest dealer.

Summary of the Button

The button is the most profitable and hence most important position at the table. It’s important to play actively from this seat and get involved in the action (often with quite a wide range of starting hands).