What does it mean to ‘Check in the Dark’ in Poker?

The poker term 'check in the dark' means to check on the current betting round without waiting to see which cards are dealt. 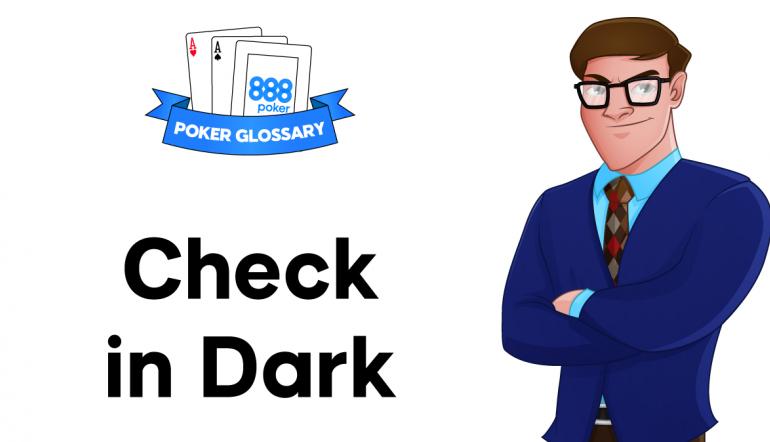 The term check in the dark means to check on the current street without waiting to see which cards are dealt.

For example, right before the dealer is about to deal the flop cards, the player who is first to act says ‘check in the dark’. His option will now be to check regardless of what the flop texture is.

This technique is mainly used to try and confuse or ‘psyche out’ an opponent. In theory the play doesn’t make sense, since we always want to make our decisions based on the maximum amount of available information.

Should We Ever ‘Check in the Dark’?

Checking in the dark is presumably always less profitable than deciding whether to check based on the information available. Although there may be some advantage caused by confusing our opponent, it’s very difficult to quantify it’s value. Most professional players never check in the dark (but may do so on TV shows for entertainment value).

Is it Allowed to ‘Check in the Dark’ in Poker?

What Does it Mean When Villain Checks in the Dark

When villain checks in the dark, the key piece of information is that we can’t narrow his range down any further based on his check. When villain checks in the dark it means that he is checking 100% of his range. We also know that he may be trying to level us in some way unless he is consistently checking in the dark against everyone. Finally, there is a good chance that our opponent has a high opinion of himself and watches too much televised poker.

What Does it Mean to do Something ‘In the Dark’ in Poker?

To do something ‘in the dark’ means to act before taking into account all of the available information. For example a player may announce ‘bet $20 in the dark’ while the flop is still being dealt. Regardless of the flop texture the player will now be forced to make a $20 bet since his verbal announcement is binding. In most cases making actions ‘in the dark’ won’t maximize our profits, but it’s sometimes used as a technique to confuse or tilt opponents.

Checking in the dark means to act before seeing which cards are dealt on the current betting round. It is not generally recommended to make use of this option unless having some fun in a low stakes home game.
When our opponent ‘checks in the dark’ we know that his decision is not based on the new board card/s and that he is taking that same action with 100% of his range.