What is Dead Money in Poker?

The poker term 'dead money' refers to unclaimed or extra chips in the pot that could potentially be won easily through aggression. 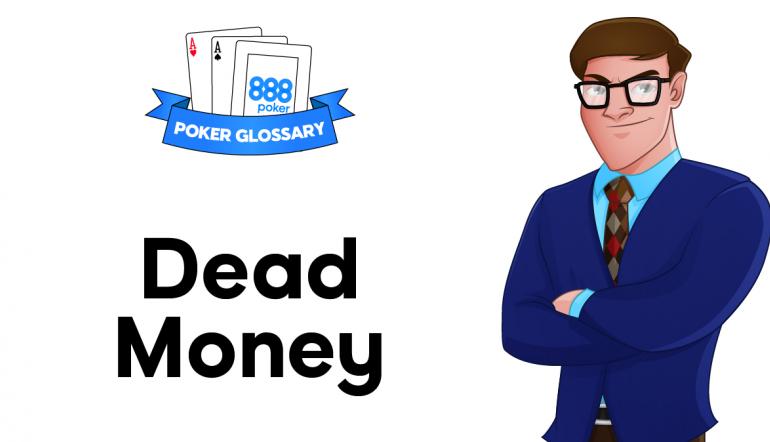 The poker term dead money refers to unclaimed or extra chips in the pot that might be up for grabs without too much of a contest.

A common example might be a player who elects to post a blind out of turn and then checks his option preflop. Since he usually would have raised with a strong hand, the additional 1bb in the pot is often referred to as dead money making the pot a more lucrative opportunity to steal.

A weak player who has no hope of winning may also sometimes be referred to as dead money.

What Does it Mean if a Poker Player is Called ‘Dead Money’?

What Does it Mean if there is ‘Dead Money’ in Poker Preflop?

Preflop ‘dead money’ means that there are additional chips invested into the pot that the original bettors have seemingly given up on defending. A common example is when a player posts the blinds out of turn and then checks his preflop option rather than raising. It seems likely that his hand is weak and that he will be folding to a decently sized isolation raise. Another example is when there is a preflop open-raise plus cold-callers followed by a squeeze. When the initial raiser (and perhaps some of the cold-callers) fold, their investment into the pot is now considered ‘dead money’. Any remaining defenders get a better price on continuing preflop.

What Does it Mean if there is ‘Dead Money’ in Poker Postflop?

Postflop ‘dead money’ usually means that players are not showing much interest in the current pot (there is a lot of checking going on). In such instances the pot might be referred to as ‘dead money’ since no-one appears to be fighting for it. In such instances a small bet might be extremely profitable since it could potentially take down the pot with a high frequency.

What is an ‘Orphaned Pot’ in Poker?

An orphaned pot is where no player seems interested in winning the current pot (there is usually lots of checking going on). Such a pot may also be described with the term ‘dead money’. Since the remaining players presumably have trash hands a small bet can be very effective in picking up the pot with a high frequency.

Why is Dead Money Important in Poker?

Dead money implies that our opponents may not be fighting for certain pots. Recognizing such situations can be profitable since we can often win the pot easily without needing to invest a large amount of chips.

The term dead money implies that they are chips in the pot that players are not actively fighting for. Recognizing these scenarios helps us to improve our winrate because we can often win such pots without a fight (or at least get a much better price when competing).