VPIP stands for “voluntarily put in pot”. It describes how often a player voluntarily invests chips into the pot when given an opportunity. 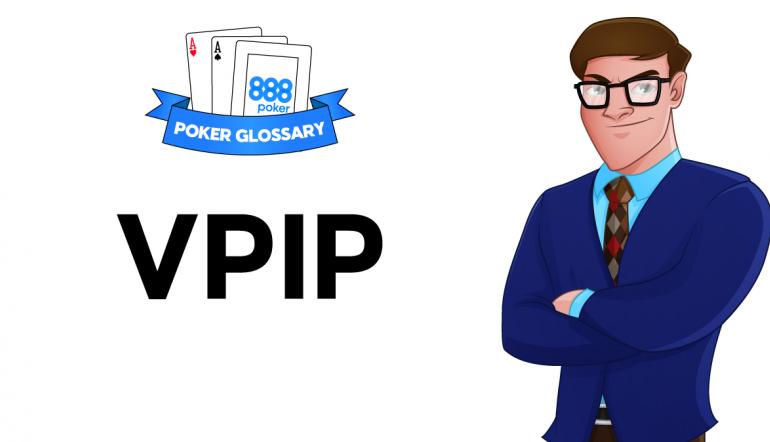 VPIP stands for “voluntarily put in pot”. It is the phrase for a common poker statistic. The statistic describes how often a player voluntarily invests chips into the pot.

In this guide, you’ll get answers to the following VPIP questions:

This crucial piece of data indicates how “tight” or “loose” a specific player is. Players in the know often use the pronunciation “vee-pip”.

Checking our option in the big blind when facing a limp does not count as voluntarily investing chips into the pot.

Example of VPIP used in a sentence -> It was hard to give Villain credit preflop given that his VPIP was so high.

How does VPIP live and online differ?

VPIP is generally more of interest to online players rather than live players. Online players often have an automated way of tracking the VPIP of their opponents.

Live players would have to do the same calculation manually (which is too involved).

The higher the VPIP, the “looser” a player is. When they enter a pot, the less we should give them credit for having a strong hand.

Live players usually have higher VPIPs than online players on average. This fact is due to the slow nature of physically dealing out cards.

Live players would rarely track the precise VPIP frequency of their opponents.

But they should still have a good idea about which opponents are tight and which are loose.

What is the difference between ‘VPIP’ and ‘PFR’?

PFR only focuses on aggressive actions preflop. A raise on the preflop betting round always counts towards VPIP. So, a player’s VPIP must always be higher (or equal to) his PFR.

What does the gap between VPIP and PFR tell us?

Both of these players play exactly 25% of their holdings preflop. But they have significantly different playing styles.

Player 1 is aggressive when he enters the pot. He does so by raising the majority of the time.

Player 2 is passive when he enters the pot. He does so by calling the majority of the time. A large gap between VPIP and PFR indicates a passive player.

How should we play against players with a low VPIP?

Players with a low VPIP only enter the pot with extraordinarily strong holdings. So, we should treat them with caution. Give them respect when they are representing a strong holding.

This stat also means they are folding a lot, preflop. We should look to open-raise aggressively when these players are acting behind us preflop.

Due to their low VPIP, we can steal their blinds repeatedly.

How should we play against players with a high VPIP?

Players with a high VPIP enter the pot with a wide range of different holdings. We should generally look to give their lines less respect both preflop and postflop.

Our exact strategy will depend on their other tendencies, though. For example, some opponents may tighten up dramatically postflop. This scenario allows us to steal to the pot.

Other opponents may continue with weak hands postflop. In these circumstances, we can get the chips in wider for value.

The two key takeaways are as follows -