Follow along as we look at the final table highs and lows in the World Series of Poker Main Event. With a $10K buy-in, there’s bound to be a lot of emotion! 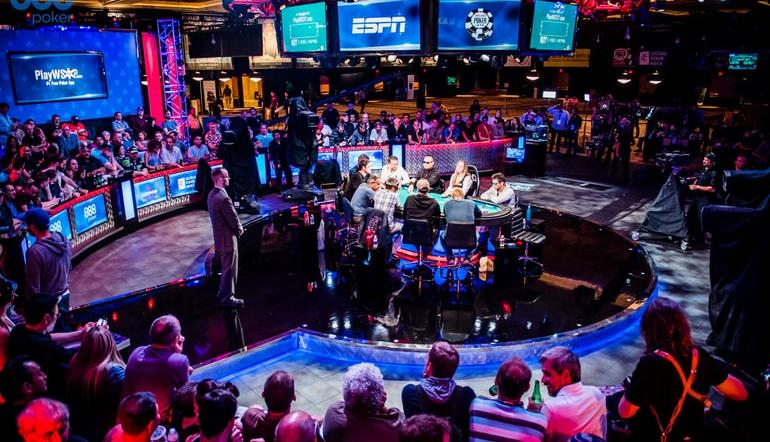 If recent history is an indicator, the 2019 World Series of Poker Main Event will begin with 7,000 to 8,000 competitors putting up $10,000 each for a shot at being crowned WSOP Main Event champion.

Each year, since the WSOP’s inception 50 years ago, the final table has been a pressure cooker where some of the best poker in the world gets played with mind-boggling sums at stake. The winner of this year’s tournament will be rewarded about $8 million and a place in history.

Every final table comes with amazingly unforgettable moments and scenarios. As the WSOP celebrates its 50th anniversary this summer, here are some of our favourite memories from spot-lit showdowns in the world’s richest game.

When people say that all you need to win a poker tournament is “a chip and a chair”, it’s a nice sentiment that rarely pans out. Jack “Treetop” Straus, who stood 6’ 6” and was renowned for creative bluffing, ranks as the notable exception who proved this rule.

Back in 1982, the World Series of Poker was a far more casual affair than it is today. It took place inside the old Binion’s Horseshoe, a rather modest casino in downtown Las Vegas. There were only 104 entrants. Many of them knew one another and stood out as poker’s crème de la creme.

Straus was an insider and a top player who thought he busted out on a failed bluff. Oh, well; such things happen. He stood up from the table, put on his jacket and began walking away, probably planning to search out a cash game.

But, as he stepped back, Straus fortuitously noticed an errant chip underneath his cocktail napkin. He removed his jacket, retook his seat and resumed playing. Luck and skill merged for Straus to actually win the Main Event – coming back from having just one chip left.

Up against Dewey Tomko in heads-up play, he hit his hand-making 10 on the river to close out the tournament’s final showdown. Straus proceeded to rake in what then ranked as the largest tournament-poker pot in history, 1,040,000 chips strong, and win the Main Event’s first prize of $520,000.

Six years after that memorable showing, Straus suffered a heart attack at a poker table in Los Angeles. He died while playing the game he loved.

Erik Seidel, now known to be one of the world’s most esteemed tournament players, was a poker nobody in 1988. Formerly a top backgammon player and once a trader on Wall Street, Seidel bought into his first World Series that year. Showing supreme skill and grit, he made the final table where he eventually played heads up against Johnny “The Orient Express” Chan.

Looking back on it, Seidel himself realised that he was pretty much outclassed by the more seasoned pro – but few players on the circuit wouldn’t have been. Chan grew up working in his father’s Chinese restaurant in Houston, Texas. He cut his poker teeth in after-hours games with kitchen workers there. By the time he confronted Seidel at the final table, he already had one World Series championship under his belt.

In the tournament’s final hand, Chan flopped a straight and gave nothing away. Stunningly, he had the confidence and cunning to slow play Seidel, inducing him to push all-in with a pair of Queens on a Queen-high board. That day, an out-played Seidel had to settle for second place.

Chan’s move proved so strong that it appears in the classic Texas Hold’em flick “Rounders” to show what great poker looks like. Hanging out in the apartment of aspiring pro, Mike McDermott (played by Matt Damon), poker moll Petra (portrayed by Famke Janssen) watches a video of that final hand.

Petra marvels over Chan: “Look at that control. He knows his man well enough to check it all the way and risk winning nothing with those cards. He owns him. Poor Seidel. Kid doesn’t know what hit him.”

She’s right, and that losing hand was a poker life-lesson for Erik Seidel who now stands among the game’s most winning practitioners.

Phil Hellmuth is a tournament beast. With a record-setting 15 World Series of Poker (WSOP) bracelets to his credit, he has won more WSOP tournaments than anyone else in the game. But in 1989, one year after Johnny Chan crushed Seidel, Hellmuth was an unknown kid from Madison, Wisconsin, having his first big poker moment.

He was heads-up with Chan at the Main Event final table. A modest and calm Hellmuth announced, “I just want to try to play my best poker and win the match. I am treating [Chan] the way I treat anyone else heads-up.”

Clearly, in his element on the tournament’s final hand, Hellmuth came out with a bet, Chan raised, and Hellmuth casually shoved. Completely calm, Hellmuth transmitted no information about the cards he held. An out-stacked Chan went into the tank before calling with A-7 versus Hellmuth’s pair of 9s.

As the river loomed, with K-K-10-Q on board, Chan was suddenly in reasonable shape. Several high cards would have given him the win. Hushed spectators looked on as the dealer rolled a 6 of spades. Hellmuth shot both fists in the air and Chan looked a little miserable.

“It feels great,” said a baby-faced Hellmuth, holding up banded stacks of hundreds, maybe not fully realizing that he was leaping off on what would become one of poker’s most heralded careers.

Few people profited from underestimating Stu Ungar. But at the start of the 1997 World Series, it was difficult to expect much of a performance from him. After making his name by winning back-to-back Main Events in 1980 and ‘81, Ungar had squandered his poker genius with drugs, women and degenerate gambling.

Unable to scrounge together the $10,000 entry fee in ‘97, he convinced fellow pro, Billy Baxter to put him in and wound up executing a bravura performance.

That year, the final table was played outdoors on a sweltering summer day. Ungar, with pale skin glistening, followed through on a vow made to Baxter: “He told me early in the tournament: ‘It’s over with; nobody has a chance.’”

Others agreed. Ungar’s pal and long-time benefactor Mike Sexton tried betting on Unger against the field, and he could not muster enough action to make wagering worthwhile.

So, when Ungar hit his tournament-winning deuce on the river, people couldn’t have been too surprised. Even Stu “The Kid” Ungar himself seemed to take it in stride. Moments after acing the Main Event, he told commentator Gabe Kaplan, “Nobody’s ever beaten me playing cards. The only person who’s ever beaten me is me and my bad habits.”

Less than a week later, after receiving his 50-per cent cut of the million-dollar prize (Baxter pocketed $500,000 in exchange for staking Stuey), Ungar blew through it all with reckless sports betting.

By the end of the next year, in late 1998, Stu Ungar was found dead and all but broke in a dive motel room on the Vegas Strip.

At the 2000 WSOP, the final table of the $2,500 pot-limit Omaha event was a murderer’s row of poker masters. It was headed up by the 71-year-old veteran Amarillo Slim Preston, British gangster David “Devilfish” Ulliott and the by-then-notorious Phil Hellmuth.

Only 23 and largely unknown beyond poker-world insiders, Ivey eventually found himself heads-up against Slim. Trumping any other qualities possessed by Slim, there was one that must have been intimidating: Never in his life had Amarillo Slim lost a WSOP final table. At a five-to-one chip deficit, Ivey had his work cut out for him.

But he proved to be up for the task. Slim had a habit of chattering at the table, using seemingly friendly country-inflected conversation to put players off their game and to glean information from them. It was also designed to push opponents into giving off tells that Slim would later capitalise on. Ivey wisely opted to ignore the Texan’s pleas and to focus in on his game.

Before heads-up play commenced, Slim offered what sounded like homespun wisdom to the gathered crowd and to his opponent: “Very rarely do the sheep slaughter the butcher.”

(1) The presumed butcher did get slaughtered and
(2) Phil Ivey was no sheep.

In just one hour, Ivey outplayed Slim to the point that he came back from a significant deficit to snag his first WSOP bracelet.

A poker legend was born right before our eyes.

WSOP 2019
WSOP
About the Author
By
Michael Kaplan

Michael Kaplan is a journalist based in New York City. He has written extensively on gambling for publications such as Wired, Playboy, Cigar Aficionado, New York Post and New York Times. He is the author of four books including Aces and Kings: Inside Stories and Million-Dollar Strategies from Poker’s Greatest Players.
Related Content
How to Choose the Best Poker Coach