In an interview with 888poker, while playing Heads up, Graeme Le Saux has claimed Chelsea should be desperate to keep ‘precocious’ Eden Hazard 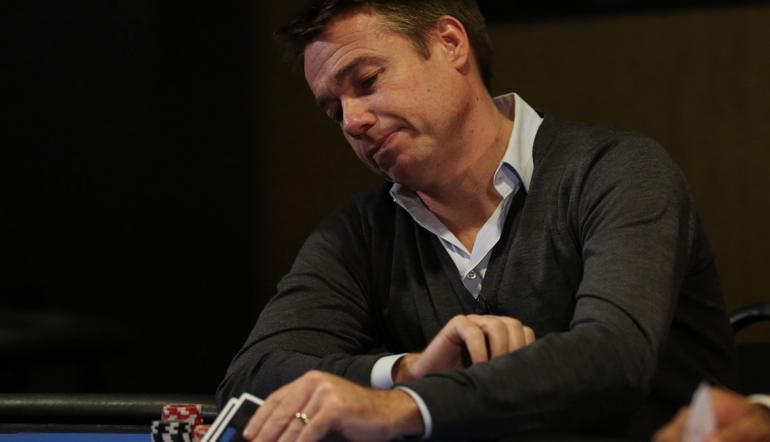 In an exclusive interview with 888poker.com, Chelsea legend Graeme Le Saux has claimed the Blues should do everything in their power to retain the services of their under-performing superstar Eden Hazard and keep him from the clutches of a circling Real Madrid, in addition to revealing his style of poker play.

On his style of poker play

“I’m ok, but make rash decisions. I really mean that as well. I see a picture card and I think I’ve got a good hand!”


From his many ex-team mates who would he least like to play heads-up with?

“Dennis Wise. The thing is you can’t win. He’s a very good card player so he’s likely to beat you but he’s a very competitive man so if you did happen to beat him you wouldn’t get out of there alive.”

Chelsea should be desperate to keep ‘precocious’ Hazard

“If you get him into the same frame of mind he was in last season then he is a special player who can be the difference. I’ve seen a lot of him this season and he has struggled but it’s not his work-rate that is letting him down or attitude or confidence in making himself available. In front of goal he has hit a wall and can’t score and it’s had an impact on the rest of his game.”
“I just think he is a precocious talent and if I was in Guus Hiddink’s shoes every single day I’ve have a meeting with him to make sure he feels wanted. Not to mollycoddle him but if you can get him to deliver then the whole team changes. He’s that important. So I would be absolutely desperate to keep hold of him.”

While Hazard should be kept at all costs media speculation has naturally linked the title holders with several January transfer targets as they bid to turn around a disastrous season that’s seen them languish above the drop zone having lost nine games. Yet Le Saux is adamant his former club have enough talent at their disposal to not require any big money moves for the likes of Leicester’s Rayid Mahrez.
“I don’t look at the Chelsea side and say they are in need of a massive overhaul. A lot of it is the form and morale of the players. I look at the whole squad and they’ve got about 30 players out on loan and younger players in need of an opportunity to play and their first team won the Premier League last year. So who do they then add to make them better? They’ve got Pedro, Hazard, Oscar and Willian so I don’t necessarily see Mahrez fitting into that as a matter of urgency. They’ve got plenty of options available to them to get the formula right without going out and buying more players.”


Chelsea remind me of Blackburn

It is a formula that needs righting sooner rather than later with Chelsea’s dramatic fall from grace rivalling Leicester’s rise as the story of 2015/16. Indeed, according to Le Saux, they will want to ‘write this season off out of the history books’. The 36-cap England international draws direct parallels between what is happening at Stamford Bridge and a bizarre spell while at Blackburn Rovers that saw the north-west side plummet down the league mere months after winning the title for the first time in over eighty years.

“I’ve been in a similar situation myself at Blackburn where we won the league and then you come back and the dynamic has changed and then things started to deteriorate. It’s surprising how quickly this can happen. Chelsea are an example of that going from league champions to struggling team without any real change in personnel.”

Who then is to blame? Certainly very few have covered themselves in glory but football wouldn’t be football without fans picking out scapegoats and in this instance one such individual appears to be Branislav Ivanovic whose woeful form this term has contrasted greatly with a succession of accomplished displays in recent times. On this Le Saux evidently sides with the supporters.

“It’s all fair in one sense because if the crowd decide that you’re not playing well or see something they don’t like about you then they make their mind up. He’s had a poor season even by the rest of the team’s standards so he is very vulnerable in that position at right-back but he is not solely responsible. You need a bit of help against pacy wingers and if you don’t get that protection you can get exposed.”

“I saw him in the first game of the season against Swansea and Montero absolutely destroyed him. Ivanovic is hardly the quickest and he is alright once he gets going but he needs five or six yards. As a full-back that’s too late.”

Pace was never a concern for the Jersey-born defender during his playing days, nor tenacity or intelligent movement down the Chelsea left. In fact it’s fair to say the London giants could desperately do with his younger self right now.

Chad Holloway is a 2013 WSOP Bracelet winner who has previously worked for PokerNews as a managing editor and live reporter
Related Content
Top 10 Poker Gifts for the Poker Players in Your Life!