Phil Hellmuth is one of the most famous and accomplished poker players on the planet. 888poker takes a look back at some of his famous fits! 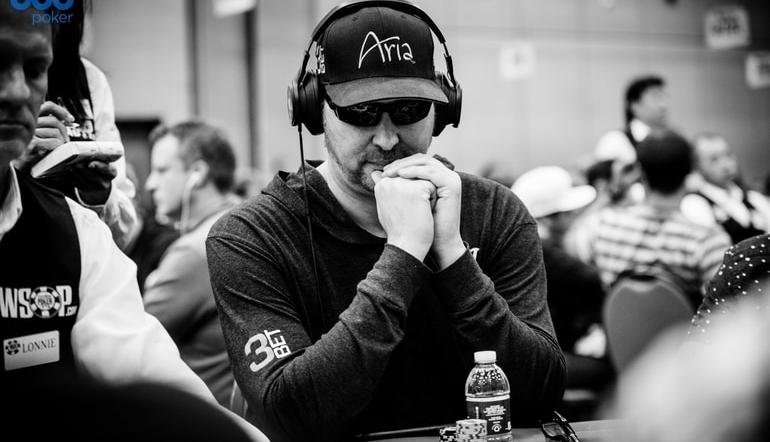 Phil Hellmuth has a poker face. But, as all too many card players can attest, it’s been known to disintegrate in a flash, exude unbridled rage and spew obscenities so blue that they give Samuel L. Jackson a run for his money.

Fittingly nicknamed the “Poker Brat”, Hellmuth is as famous for blowups at the table as he is for snagging nearly $23 million in poker tournament winnings and accruing more World Series of Poker bracelets than anyone else in the game.

At the time of this writing, with the 50th Annual WSOP already in motion, his bracelet collection stands at 15 and counting.

Why the Brattish Outbursts?

Hellmuth has told me that the outbursts are a by-product of his competitive instincts. “[Blowups] happen when I am in the biggest tournaments, I have put in a lot of time and effort, and somebody plays a hand that I am supposed to beat — but I lose because they get lucky,” he said. “I say to myself, ‘This idiot played a hand that I was supposed to win and double up on. But now I lose half my stack to bad play.’ It gets frustrating.”

If anyone figures that Hellmuth has softened his edge, recent news proves otherwise. The Poker Brat’s first WSOP meltdown of 2019 was reported on June 1. It occurred after Chance Kornuth had the audacity to river a flush and beat Hellmuth’s pair of Kings.

Hellmuth began cursing to himself, and Kornuth joked, “I usually blame the dealer…” Hellmuth fired back, “It’s just fucking bullshit. I had you trapped. You didn’t deserve to win the pot.” Kornuth coolly countered that nobody deserves anything.

With Hellmuth’s sense of entitlement on full display, the verbal unleashing was surely a hoot to witness and an appealing sideshow to the action at the tables.

Here are five more of our favourite Poker Brat blowups.

At the 2008 World Series, a Bucharest pro by the name of Cristian Dragomir was playing loose and fast in a hand while holding 10, 4 of diamonds. Hellmuth had Ace, King off-suit and raised 175,000 pre-flop.

Dragomir improbably called. But when a 10 came on the flop, he bet 300,000 on the strength of his pair. Hellmuth considered and folded. Both players showed their cards. At that point, Hellmuth freaked out about “this idiot guy over there, a crazy guy trying to go broke.”

Then Hellmuth briefly stormed away before coming back with a fresh head of steam and scolding, “I’m gonna tell you something, buddy. Buddy, you are an idiot … You are the worst player in history. Someone puts in 400,000 with 10, 4 and the crowd celebrates like it’s a good play. Did you see what this idiot just did?”

Early on in the rant, Dragomir came back with the perfect response: “I am an idiot with a stack. You don’t have a stack!”

At the National Heads-Up Poker tournament, in 2008, Hellmuth was up again the great Tom “Durrr” Dwan who then ranked as the premiere online player. Just a few hands in, Hellmuth was dealt pocket Aces, Dwan had 10s and betting became heated. Dwan went all-in and Hellmuth, of course, snap-called.

Hellmuth was a big favourite – until a 10 dropped on the turn. Dwan looked as shocked as Hellmuth. After a rag hit on the river, Hellmuth tersely told his opponent, “Son, I would never have put more than 3,000 in with 10s.” Looking entertained, Dwan responded, “I was going to say, ‘Good hand, sorry for the suck-out,’ but…”

Of course, this did not slow down Hellmuth who added, “Son, you are the sucker.” Dwan insisted that it was “a standard play.” Hellmuth maintained that it was “a terrible play” and added, “We’ll see if you’re still around in five years.” It’s now 11 years later, and Dwan continues to thrive.

He currently ranks as one of the greatest high-stakes cash-game players in the world. Donning a black leather jacket and walking away from the table, Hellmuth told the room, “You know I got him to stick in 20,000 [early in the hand]? I did the quick re-raise. I made myself look weak. It was pretty beautiful, I thought…”

Back in 2010, at a WPT final table, Hellmuth had a 63 per cent chance of winning a hand against online pro, Andy Seth. Seth, with Ace, Jack of clubs went all-in against Hellmuth who held a pair of Queens. Hellmuth called and was confident as nearly a 6 to 1 favourite on the flop.

He was still ahead on the turn but got vanquished after an Ace fell on the river, allowing Seth’s pair of Aces to best Hellmuth’s Queens. The Poker Brat lived up to his nickname when he stumbled away from the table with hands bracketing his head.

He dropped to his knees, groaned, laid on the floor in a fetal position and pathetically muttered, “I waited for this guy…” While opponents at the table were bemused by the spectacle, commentator Mike Sexton said, “Go give him his blanky and pacifier or something.”

Every poker player loves being dealt pocket Aces. And every poker player knows that ugly things can happen to those Aces once more cards hit the table. In the case of a hand that Hellmuth played on “Poker Night in America,” in 2017, a terrible-case scenario unfolded as he got to heads-up with Liv Boeree.

She started with a pair of 5s, called his raise and checked back at him on the flop. But when a third 5 hit on the turn, she bet modestly, and Hellmuth called. She made a standard bet on the river. Hellmuth called that one as well and watched his Aces get cracked.

Not one to lose quietly, he analysed how he knows everything about Boeree’s thinking, “made a great call” and is “so fucking smart … yet somehow she shows up with a fucking set.”

Boeree giggled, and Hellmuth wrongly assumed she was laughing with him. As the next hand reached completion, the Brat continued steaming about how “it is so unfair.”

5. Flipped Out By the Flop

It’s a classic Hellmuth meltdown when, during the 2009 World Series, Bob Lillquist found fortune on the flop. Prior, he limped in with King, 10 of hearts, Hellmuth raised with a pair of pocket Jacks and Lillquist called - nothing unusual yet.

While the flop of King, 6, 10 was a good catch for Lillquist, everybody is entitled to get lucky sometimes. But try telling that to Hellmuth who lost a 13,000-chip pot after another cowboy landed on the river.

As if on cue, Hellmuth jumped up when Lillquist showed his cards. He began railing against “moronic players and the worst players … who raise with friggin’ King, 8.” When Lillquist defended his decision, Hellmuth asked, “You want to discuss the hand, really?”

Actually, for Hold’em fans who enjoy watching the Poker Brat’s nuclear reactions, the correct answer would be, “Yes, Mr Hellmuth, very much so…”

WSOP 2019
WSOP
About the Author
By
Michael Kaplan

Michael Kaplan is a journalist based in New York City. He has written extensively on gambling for publications such as Wired, Playboy, Cigar Aficionado, New York Post and New York Times. He is the author of four books including Aces and Kings: Inside Stories and Million-Dollar Strategies from Poker’s Greatest Players.
Related Content