Poker Quotes: Words and Wisdom on the Game

Poker quotes spice up the combination of gambling, skill, betting, and bluffing. Check out some of the best and funniest ones from the best in the game! 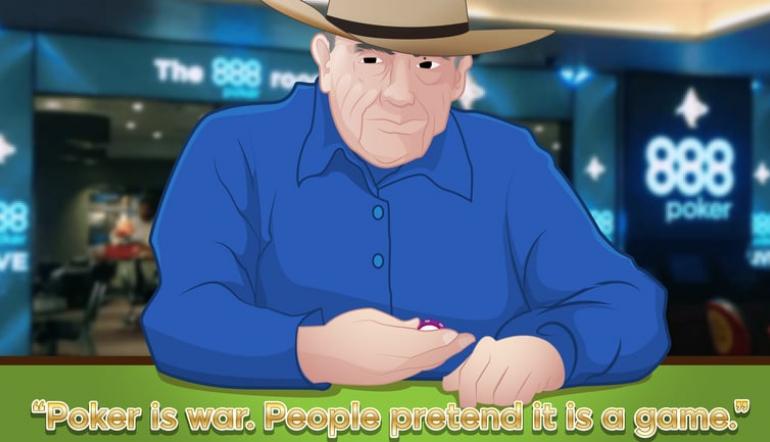 Poker’s unique combination of gambling, skill, betting, and bluffing mixed with a little of the Old West make it a very attractive game. Its lore, history, and legends have spawned a deep literary tradition not seen other formats. That includes numerous quotations and sayings with unique words of wisdom from some of the most colourful characters and gamblers.

From catchy and humorous sayings to deep thoughts about life, poker offers plenty of witticisms from players who’ve had plenty of time at the tables for reflection.

Here’s a look at some of those interesting comments and remarks from some of the game’s greats as well as others who have taken a seat at the felt.

“I was tired, a little the worse for drink, jet lagged and light-headed – four out of four conditions in which one should certainly not play poker in Las Vegas.”
– Anthony Holden

The old school legend offers some words to live by – avoid both.

“When I experience a bad beat, I think of it as an overhead. If you own a business, you have to pay your bills, and I consider a bad beat one of my bills.”
– Jennifer Harman

The poker legend offers some nice insight on those painful hands that leave you frustrated.

“If I lose, I don’t give a damn about the money, but I just hate the embarrassment of being beaten.”
– Jack Straus

The Texan and Poker Hall of Famer won plenty in his lifetime.

“You call, gonna be all over baby.”
– Scotty Nguyen

Instead, Kevin McBride called and the 1998 WSOP Main Event championship was Nguyen’s. It wasn’t a bluff.

“Poker is a lot like sex. Everyone thinks they are the best, but most don’t have a clue what they are doing.”
– Dutch Boyd

Hopefully, some focus and experience can overcome those shortcomings.

“The beautiful thing about poker is that everybody thinks they can play.”
– Chris Moneymaker

The man that launched the poker boom also realizes even amateurs can rise to the top.

“Most of the money you’ll win at poker comes not from the brilliance of your own play, but from the ineptitude of your opponents.”
– Lou Krieger

The poker player and writer loved the game and saw it as battle of wits.

“If there is one ‘X-factor’ that unites all great poker players, it’s their willingness to play aggressive poker.”
– Phil Gordon

Timidity won’t get it done at the poker table.

“Serious poker is no more about gambling than rock climbing is about taking risks.”
– Al Alvarez

The famed author’s book Biggest Game in Town was the first to highlight the WSOP.

This old schooler dominated at poker and bridge and may have been ahead of his time.

“Hold’em is to stud what chess is to checkers.”
– Johnny Moss

Players are always watching for those Kings, Queens – and a nice checkmate.

“Just play every hand, you can’t miss them all.”
– Sammy Farha

The runner-up to Moneymaker in the 2003 Main Event lives his credo.

“When your opponent’s sittin’ there holdin’ all the Aces, there’s only one thing to do: kick over the tables.”
– Dean Martin

The actor and singer apparently didn’t take kindly to cheaters.

The author and expert card manipulator may have found it difficult to get action.

“The man who cheats is a fool of course. He cheats not only the other players but himself, as well. He cheats himself of self-respect and the pleasure of the game.”
– Nick Dandalos

This quote was in the book Gambling Secrets of Nick The Greek – after being cheated by a player he previously viewed as a friend.

“Trust everyone, but always cut the cards.”
– Benny Binion

The founder of the World Series of Poker was no fan of cheaters.

“Poker is a combination of luck and skill. People think mastering the skill part is hard, but they’re wrong. The trick to poker is mastering the luck.”
– Jesse May

No word if the author mastered the luck variable but he wrote a few good poker books to check out.

“Limit poker is a science, but no-limit is an art. In limit, you are shooting at a target. In no-limit, the target comes alive and shoots back at you.”
– Crandell Addington

The Poker Hall of Famer is short and succinct on what makes the game great.

Hopefully the 1983 WSOP Main Event champ didn’t do both.

“Poker is war. People pretend it is a game.”
– Doyle Brunson

Texas Dolly gets real about his game of choice.

“A poker player has to get lucky – in the same way that Warren Buffet gets lucky playing the stock market year after year.”
– Phil Gordon

Like the Oracle of Omaha, top poker players are skillful and savvy – and looking to cash in.

“The two things you need to be successful in poker are, first, find the muck, and second, don’t play your own money.”
– David “Devilfish” Ulliott

The Englishman was apparently an early advocate of poker staking.

“I believe that poker is a people game played with cards, not just a card game played by people.”
– Juan Carlos Mortensen

Sounds like the baseball legend was a player and most players would agree with his view.

“May the flop be with you.”
– Doyle Brunson

The poker legend adding a bit of Star Wars pop culture to his card playing.

“Last night I stayed up late playing poker with Tarot cards. I got a full house and four people died.”
– Steven Wright

The deadpan comic riffing on stage. If only players could read the future.

“To be a poker champion you must have a strong bladder.”
– Jack McClelland

The poker player apparently believed time away from the table means missed winnings.

“What I know about poker you can fit into a thimble with room left over, but I’m learning.”
– Wilford Brimley

The actor might be worth taking a seat next to at the poker table.

“The Greek” was always up for some action.

“Poker has the feeling of a sport, but you don’t have to do push-ups.”
– Penn Gillette

The famed magician’s card skills may have many avoiding him at the table.

“Life, like poker, has an element of risk. It shouldn’t be avoided. It should be faced.”
– Edward Norton

The star of “Rounders” is obviously a player himself.

“All you need is a chip and a chair.”
– Unknown

This is one of the most popular sayings in pokerand believed to have originated when Jack Straus won the 1982 WSOP Main Event after being left with a single chip.

“All I did was eat, sleep, and breathe tournament poker and the results showed that.”
– Daniel Negreanu

Kid Poker dominated on the World Poker Tour in 2004, winning two events and making the final table in two more. Plenty of success has followed.

“Life is not always a matter of holding good cards, but sometimes playing a poor hand well.”
– Jack London

The author with some with an excellent comparison between life at the table and life in the wild.

“One day a chump, the next day a champion. What a difference a day makes in tournament poker!”
– Mike Sexton

The long-time WPT commentator offers some hope for all players.

“Poker reveals to the frank observer something else of import. It will teach him about his own nature. Many bad players do not improve because they cannot bear self-knowledge.”
– David Mamet

The playwright and poker player offers some words that might resonate with many card players.

“If there weren’t luck involved, I would win every time.”
– Phil Hellmuth

The 15-time bracelet winner living up to his nickname – The Poker Brat.

“If you can’t spot the sucker in the first half hour at the table, then you are the sucker.”
— Mike McDermott (played by Matt Damon) in the film Rounders

This is an old saying from the business world but made famous for poker in the film. It certainly rings true.

“I’m absolutely gonna win it, because I’m ruthless. I sit at the poker table and my job is to destroy people.”
– James Woods

The legendary actor brings plenty of skills with his cards and chips.

“Those chips are your weapons, your arsenal. It you’re afraid to use them, don’t play.”
– Doyle Brunson

This poker legend is certainly never afraid of using his weapons – usually winning plenty of battles.

“I never go looking for a sucker. I look for a champion and make a sucker out of him.”
– Amarillo Slim Preston

One of poker’s early stars had many sayings and wasn’t afraid of a little braggadocio.

The Poker Brat is never shy about tooting his own horn.

“Try not to think you’re better than you are.”
– Erik Seidel

He seems to take the opposite approach of Hellmuth. With millions in winnings, the humble approach has served him well.