Luck in Poker - The Luck vs Skill Debate

Ever wondered if poker is really a game of skill or just a game of chance? Find out more about this intriguing game of variance. 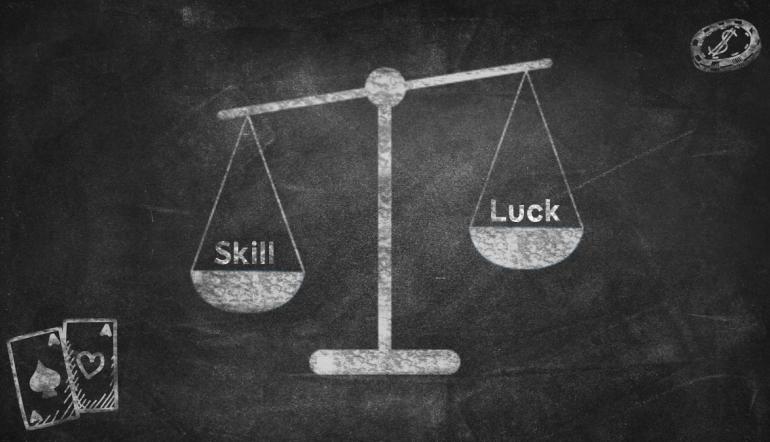 Sometimes it can be a little bit difficult to draw the line between luck and skill when playing poker. Perhaps certain players clearly seem to have more skill than others, yet it’s the lucky players who seem to always win. We may even be familiar with the common poker saying, “I’d rather be lucky than good”.

So, is a poker truly a game of skill, or is it really more about luck? Let’s find out the answer.

Luck vs Skill in Poker

Even government institutions have trouble determining whether poker is a game of skill as opposed to a game of luck. So, why is it that poker players are so certain that they have the answer?

One thing we know for certain is that there is both a skill element and a luck element in the game. How do we know this?

We can often tell whether a skill element exists in a game if it is possible to lose, intentionally.

Think about a game that most would agree to be pure chance, such as roulette. Can we intentionally lose a game of roulette? Not at all. No matter how hard we try, there will always be some kind of chance we could win.

But what about poker? Can we intentionally lose? Of course we can, we simply fold every hand preflop. Provided our opponent is not doing exactly the same as us, we are pretty much guaranteed to lose. Naturally, the majority of players would never be bad enough to do such a thing. But it illustrates the point that our decisions do have an impact on how profitable the game turns out to be for us.

Effect of Luck on Sample Size

It’s also important to differentiate poker from a game such as blackjack. Even though blackjack has a skill element to it, it’s probably more correct to refer to blackjack as a game of chance as opposed to a game of skill. The house (casino) has set up blackjack in such a way that beating the game is almost impossible over a lot of hands. (Note that there are exceptions where the casino has not taken care to make sure that their edge is as strong as it should be.)

There are similarities to this in poker which explains why there is still debate on the “skill vs luck” issue. If we simply were to play 1 hand of poker, then it would be a game of luck with a skill element to it. The more hands we play, the more poker becomes a game of skill with a luck element. Luck will rarely even out over the course of 1 hand of poker. Instead, it will tend towards giving all players an even share of luck over a much larger amount of hands (or sample size). We can use the following diagram to illustrate this: 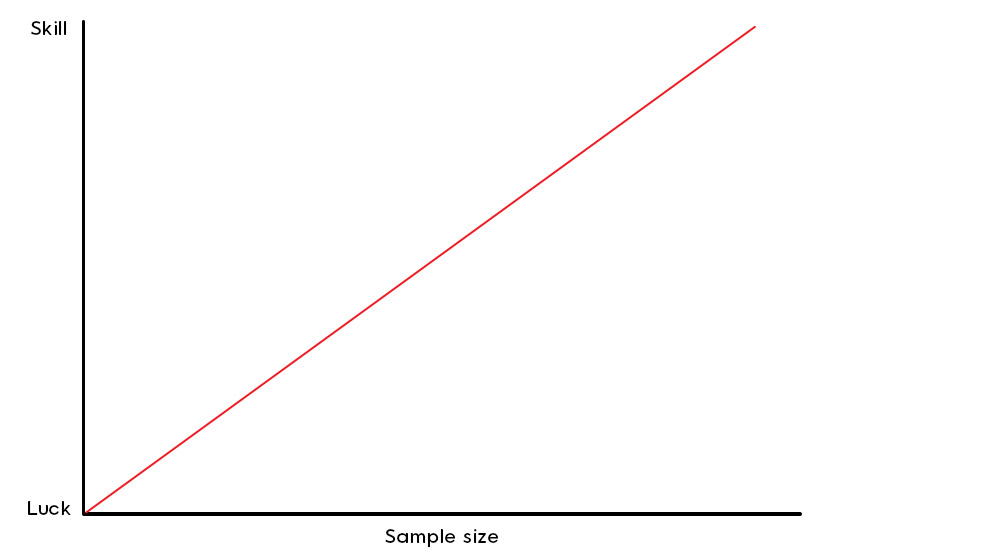 If we have played less than about 10,000 hands, we don’t even have enough information to prove that we are a winning or losing player. In fact, even sample sizes of 50,000 or 100,000 can sometimes be sketchy.

The following is a screenshot of an EV simulator. It essentially shows us what we might expect in the way of statistical variance for cash games. The player shown is a certified 6bb/100 winner, (6 big blinds won every 100 hands on average), and the graph shows the range of possible results over the course of 100,000 hands. 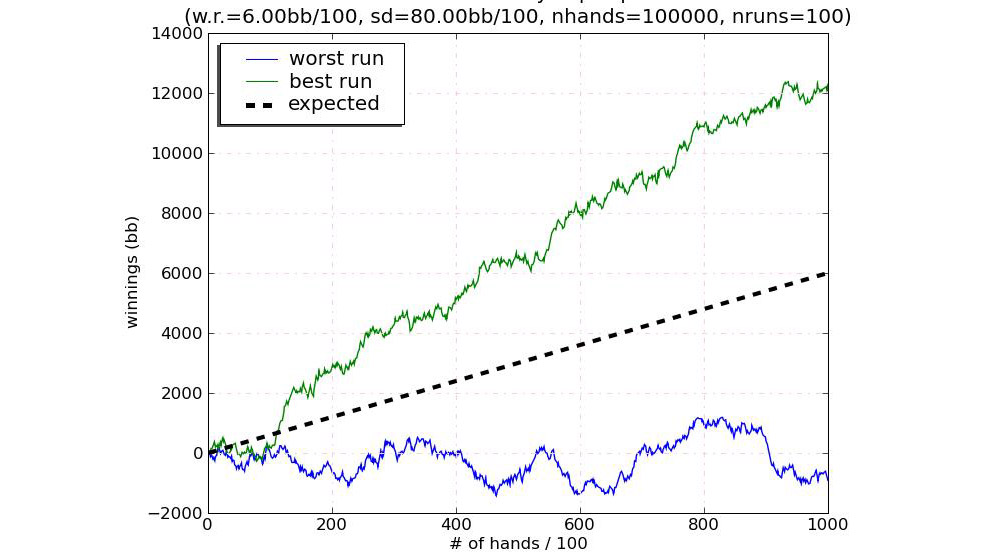 The simulation is run 100 times, and the best and worst possible results are plotted on the graph. The black dotted line indicates a constant 6bb/100 winrate; in other words, the average result.

We should be able to see that it is possible for a 6bb/100 winner (pretty decent winrate in today’s games), to actually lose over a sample size of 100,000 hands. This is not overly likely, but assuming we play enough hands of poker, it will eventually happen.

We can also establish that it is clearly possible for losing players to go on big winning streaks. There are instances of players winning big over 50,000 hands and quitting their day job, only to find that they are actually a losing player in the long run.

While we have looked at cash games primarily, the same is true, perhaps even more so for tournament players. Variance is much larger in poker tournaments than it is for cash games. This scenario is especially evident when we consider live tournament players who perhaps only play a limited number of events a year. It’s possible for years to pass by before variance evens out. In many cases, variance might never truly even out, even over the course of a lifetime.

It’s true that a little bit of luck in poker can make the difference between being a huge success and someone who never makes it. However, this doesn’t mean that we should rely on luck to make us real money.

Perhaps you’ve seen those guys who carry around “lucky” objects or card protectors to every live tournament. While luck exists in the sense that some people will go through their life running bad, while others good, it’s not correct to attribute “luck” as a property of a certain object. Luck in the sense of a mystical quality that continues to favour certain people or objects is a myth in poker.

Rather than hoping to get lucky we want to do all that we can in order to improve our poker skill. And, it helps to have a realistic idea of what we can expect in terms of good luck and bad luck. Most people severely underestimate the effect of variance on poker. It is common for poker players to brag after winning over a sample size of a mere few hundred hands. It shows they don’t fully understand that the results over a small sample size are far less the product of skill and more a product of poker luck.

Beginners
Intermediate
About the Author
By
Chad Holloway