In this complete guide to folding in poker, you’ll discover how this much-underrated, but crucial play can help determine how much you’ll profit or lose. 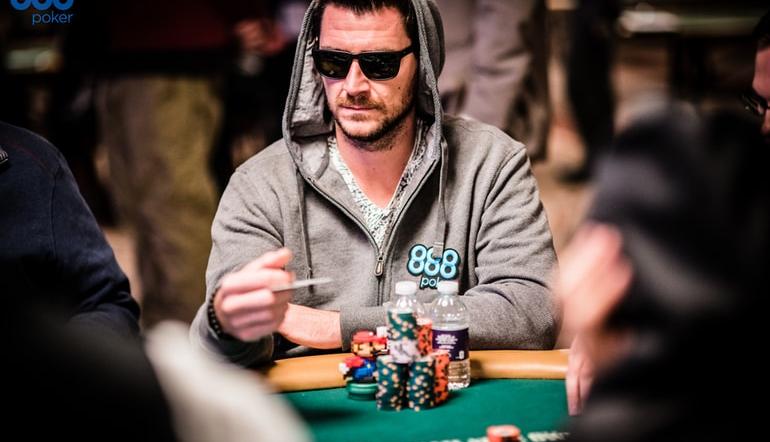 In poker, folding is where you discard your hand into the middle of the table towards the dealer. You forfeit the current pot and not being able to take any further action for the rest of the hand to win the pot.

Be sure you adhere to proper poker folding rules and etiquette when you fold by keeping your cards face down, not showing your neighbours (and, more specifically, to other players still involved in the hand).

Why Folding Should Be an Essential Part of Your Strategy

There’s an old adage in poker that still carries relevance today: “You got to know when to hold’em and know when to fold’em.” Every choice you make at the poker table are going to affect your bottom line and help determine both how much you’ll profit or lose, on average (and whether or not you’re a winning player in the long-term).

Many players focus on the aggressive aspects of poker when it comes to strategy: betting, 3betting, raising, check-raising, leading, bluffing, firing bets for all three streets.

It’s for a good reason, too: Playing an aggressive overall strategy is going to give you more ways to win the pot than just at showdown. It will usually show more profit than a more passive general approach.

However, folding is sometimes the unsung hero of poker. It can be the difference between making a losing call and cutting your losses short. And, over time, these small 0 EV folds vs -EV calls (however, big or small) will add up massively to your overall winrate.

So, in this article, we’re going to analyse the art of the fold – both what it is and when to fold in poker, along with 6 essential considerations you should make before folding.

Check out sections in this article and then refer to the end for the flowchart:

When in Poker Should You Be Folding Preflop?

Playing too many hands preflop is going to get you into a lot of tricky-to-navigate situations post-flop. For this reason, it’s vital to study starting hand charts by position to give you a reasonable baseline.

Be disciplined and fold all the hands you’re supposed to! The only deviation you should make from your starting hand charts would be dependent on your opponents’ tendencies and how to best counteract/take advantage of them individually.

It must be emphasised that in poker, you’re usually going to be folding most of your hands preflop. In fact, if you looked at HUD stats for a winning 6-max TAG player online, they’re probably only going to be voluntarily putting money into the pot preflop(VPIP)  about 22% to 26% of the time. Therefore, they’re only playing one hand for every four or five that they’re dealt!

As mentioned, small preflop mistakes can become compounded post-flop and put you in many bad situations that’ll cause you to lose even more money, so it’s better to focus on making good starting hand decisions starting immediately by folding the hands that aren’t going to be profitable to play. 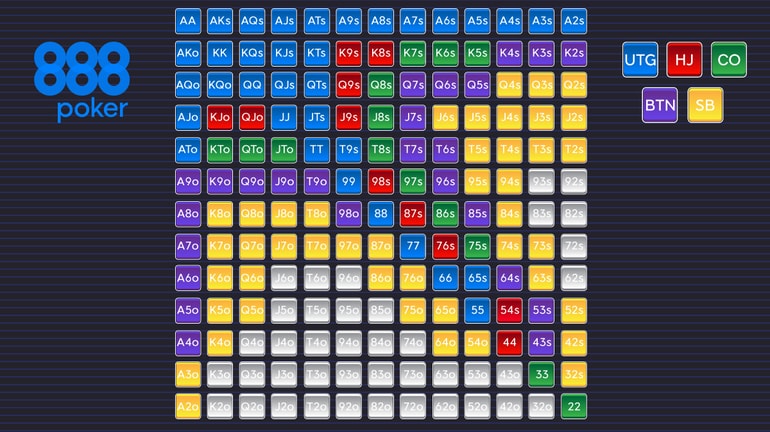 From looking at the chart, you can see what poker hands to fold preflop. Put simply, you should be folding everything in a white box all the time, in addition to everything that doesn’t correspond with the colour for various table positions.

(Note that all hands from the position before should still be included in the range for the next player position.)

For even more preflop finesse, you’ll also want to know how to combat situations where another player has already opened.

Criteria that will influence your decision to call, raise, or fold various hands after the previous action will include, but not be limited to, the following:

Playing with preflop solvers (like PokerSnowie or PIOSolver) will help give you an understanding of which poker hands to fold, based on whatever situation.

The Elite Cash Game Mastery 6-max course at Upswing Poker also includes charts for how to proceed vs RFI (Raise-First-In) and vs  3b, based on position and various open sizings.

Getting Opponents to Fold: Being the Aggressor

In regard to poker, what is fold equity?

Well, equity refers to the share of the pot that belongs to you based on the percentage chance you have to win a hand at any given point.

You won the entire pot employing fold equity and your opponent folding.

For a more in-depth and complete strategy on fold equity, check out the 888poker article: How Poker Equity Can Make Your Game Invincible

There’s always going to be a variety of considerations to factor into every decision you make at the table. (See the flowchart at the end of this article to get an idea of what a good number of these considerations are.)

Subsequently, which poker hands to fold is going to differ from one spot to another, and it’s always crucial to keep a clear, focused conscious mind to assess all the information available to you.

From a GTO perspective, it is quite easy to determine how often to fold, utilising something called Minimum Defense Frequency (MDF). This theory dictates how much of our range we should continue with, based on the bet size we are facing from our opponent (relative to the size of the pot).

Ultimately, while it is only recommended to use MDF against tough opponents (as you can profit more from weaker opponents using an exploitable approach), it’ll still help give you a baseline for helping to determine which hands to fold whenever faced with a bet from another player.

Here’s a handy chart to use for MDF:

As per this concept of MDF, it should become quite apparent why having too large of a preflop starting range can be detrimental to your post-flop playing. When facing bets from your opponents, you’ll have to defend more hands (combinatorically-speaking) if you have a wider starting hand range.

This scenario can lead to you being forced to make calls that might actually be –EV if you’re appropriately using MDF.

It can often be tricky to know when to fold top pair. Many recreational players struggle with being able to fold big hands when the situation calls for it. They bleed out money unnecessarily by having an inability to fold such hands when they should.

Often, if they use MDF and calculate how much of their range may be stronger and better candidates to call, then they’d realise how low on the hand-strength spectrum their top pair/top kicker hand rates.

To give an example of this, imagine opening with AKo in MP1. Your opponent calls in the CO. The flop comes K-T-7 with two spades. You bet and your opponent calls. The turn comes an off-suit 8. This card is likely going to be better for your opponent’s range than your more, high card/high pair range. Now Villain can have some two pair/pair + straight draw combinations.

Being out of position, you elect to check the turn and use more of a defensive strategy. The CO bets 50% pot and you call with your TPTK (Top Pair Top Kicker). The river comes an off-suit 9 (K-T-7-8-9, no flush got there).

You check, and your opponent bets 50% pot again.

Yes, it’s possible not all of these hands will bet the flop and check/call turn with 100% frequency. But compare this with the relatively narrow list of hands you could have that are worse than AK: KQ (top pair, second kicker); AQ (Ace high); A9 spades (3rd pair + missed flush draw).

In this situation, top pair/top kicker is actually towards the bottom of your range, and, therefore, should be a fold.

Thinking about this decision form another perspective, you could also try to determine which hands Villain may be trying to bluff. To be completely honest, there aren’t that many combos that Villain might turn into bluffs, especially if he thought he had SDV (Showdown Value) with top pair or mid-pair.

In this case, his bets are more likely weighted toward strength, and you should fold accordingly, based on this exploitative strategic adjustment.

6 Considerations to Ask Yourself Before Folding

We’ve now arrived at the exciting part: the ultimate flowchart to filter through when deciding what action to take and whether or not you should be folding your poker hand, in a given situation. 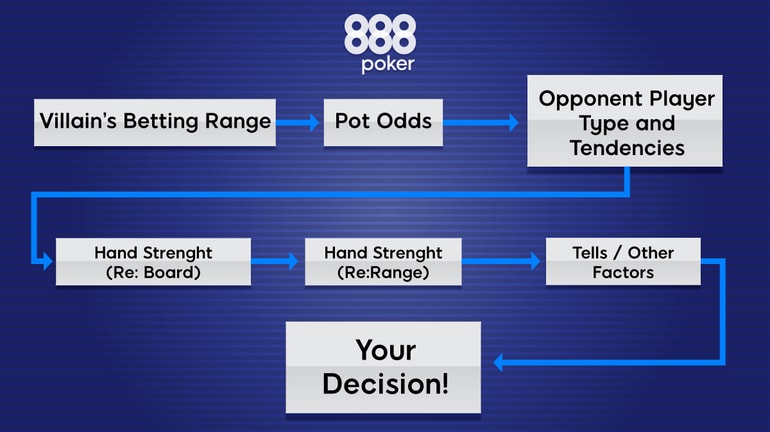 Villain’s Betting Range: It’s beneficial to take a minute to think about which hands your opponent will have on the current street. This reasoning is based on how he has played the hand up until now, in addition to the hands he’d continue betting with. To help you gain information from this range, ask yourself these 3 questions:

NOTE: If you’re not familiar with pot odds, be sure to check out one of our articles on this topic for an in-depth look at what they are and how to calculate them.

During this final point of consideration, you should also take note of any other small details before acting and if/how you should adjust accordingly.

In poker, the main focus of any choice is to take everything into account and make the decision that has the highest expected value over the long run. Sometimes when you’re thinking of folding (which always has an EV of 0), perhaps there’ll be another course of action to consider. And, it might not always be what you’re thinking.

Therefore, it’s always crucial to consider ALL of your options. For example, instead of folding, perhaps bluff raising would work in a particular spot? Maybe your hand is too weak to call but too strong to fold? It’s possible that you have great blockers, which can factor into the likelihood of a bluff working out!

So, to sum up these “final thoughts”, whether it’s in the earlier stages of a hand or when contemplating a river decision, always remember to take all your options into account before proceeding with your action.

Folding in poker may sometimes be the right way to go, but that won’t always be the case.

About the Author
By
Matthew Cluff