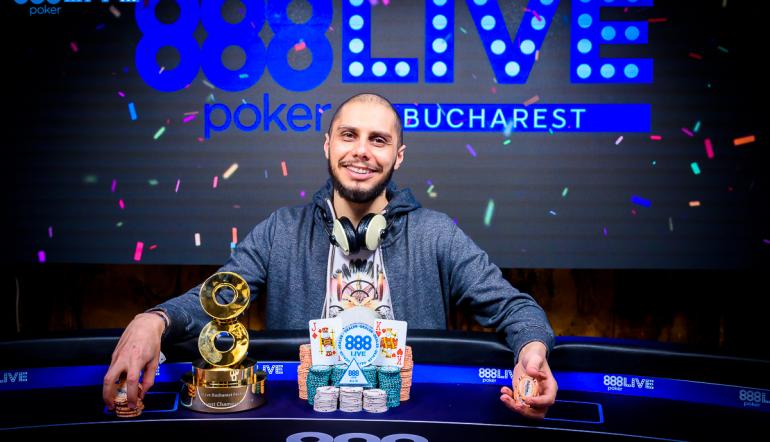 888poker LIVE Bucharest returned for its sophomore outing from 4th of March through the 10th. With a €300K guaranteed Main Event along with several side events on the table, it was shaping up to be one of the bigger live tournament series of the season.

But, before we get to all that, let’s check out the first event to kick off the series – The Opening Event.

The Opening Event Gets the Ball Rolling

With 47 players making it to Day 2, it would be a hard-fought battler as only 36 were guaranteed a payout. However, with 5 players remaining, a deal was made, and then another deal with 3 players left.

Romanian player, Sorin Radulescu, had the chip lead going into the 9-handed final table and he ended up with the lion’s share of the cash after the deals were made.

Final Result €230 Opening Event *after the deal was cut 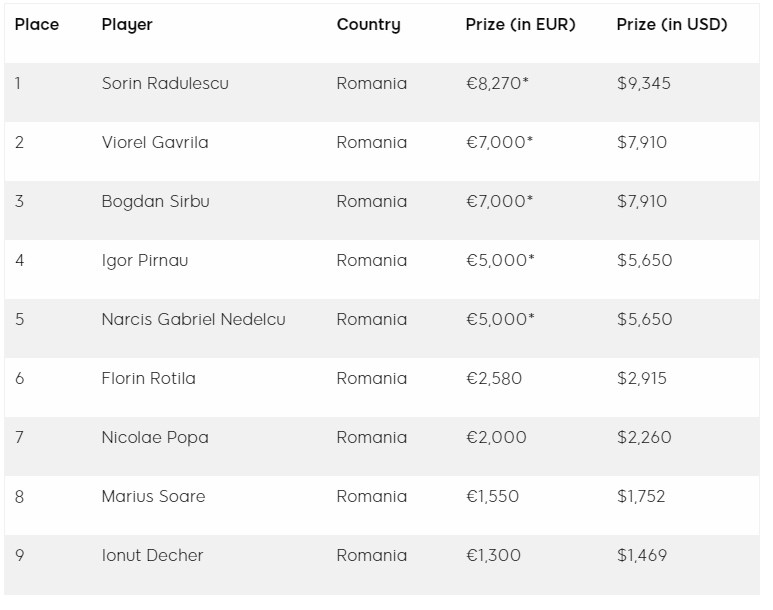 On 6th March 2019, the 888poker LIVE Bucharest Main Event kicked off with the first of four starting days. Sixty-seven players made the trip to the Intercontinental Hotel in Bucharest to play this first day.

Some players were lucky, and made it to Day 2 with their first bullet – others weren’t so fortunate. However, at the end of the day, 17 players bagged and tagged for a chanced at a piece of the €300,000 GTD in prize money.

2018 888poker LIVE Bucharest High Roller Champ and Team888 ambassador, Ana Marquez was in the mix early on Day 1a. Unfortunately, she found herself on the losing end of AQ when she went head-to-head with pockets Queens. There was no Ace to save her on the river, and Ana had to lick her wounds and live to fight another Day 1b.

Another notable bust on Day 1a was defending 2018 888poker LIVE Bucharest Main Event winner, Andrei Racolta, who lost a flip with pocket Nines against Ace-Queen. 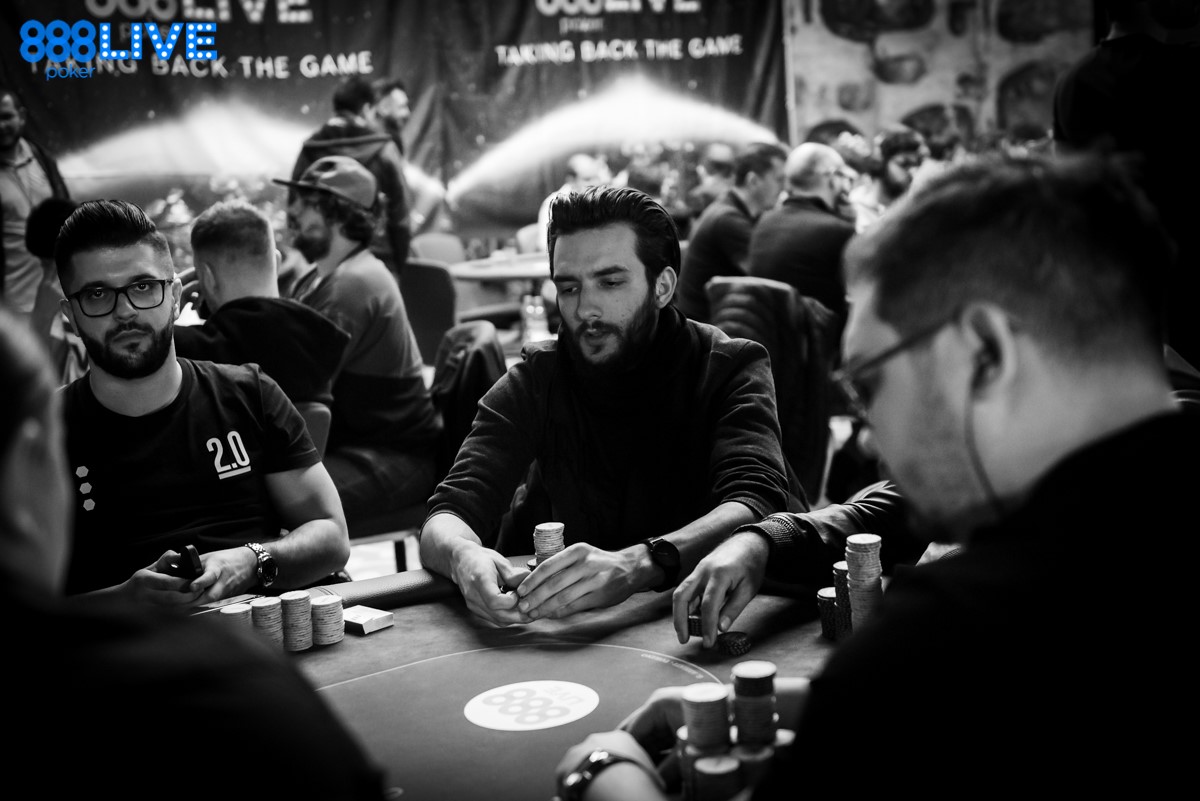 By the second level on the second of four starting days, the number of runners had already overtaken the total number of entries on Day 1a.

Day 1b also saw a large chunk of the more than 40 888poker qualifiers in action, including Derek Reid, Matthew Gearey, Angelos Valilis, Konstantinos Sideris and David Hughes – bumping the total number of entries on Day 1a to 133.

Defending champ, Andrei Racolta, had been eliminated on Day 1a, gave it another go around, and this time was a keeper. He advanced to Day 2 with 50,600 in chips to keep his back-to-back title dreams alive. 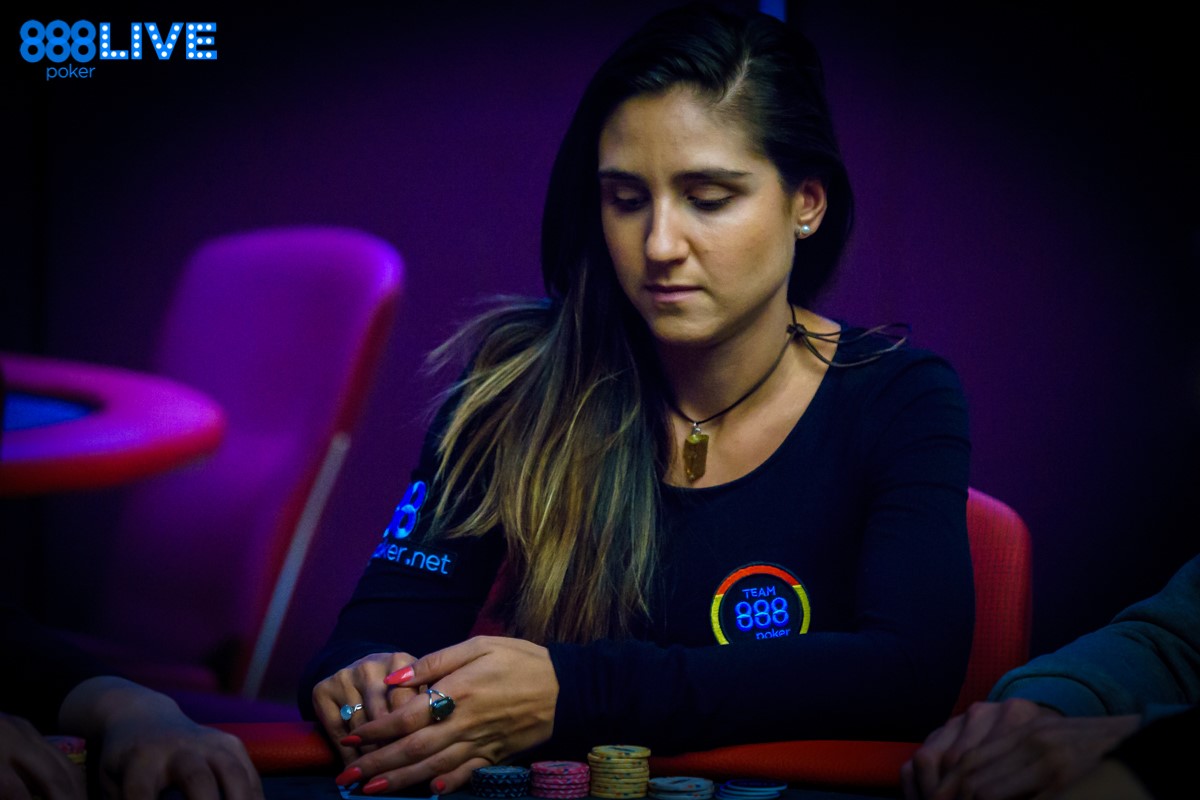 Unfortunately, Day 1b was not to be for 888poker ambsassdor, Ana Marquez, who was knocked out on Day 1a when her Ace Queen walked straight into pocket Queens and lost.

And, it was déjà vu when she ran A♠Q♦ into the Q♣Q♠ of Cornel Stan. Again, the board brought no relief, and Ana found herself on the rail on Day 1b for the second day in a row.

Her fellow team player and online poker tournament crusher, Chris Moorman, didn’t fare much better. After scratching his way through the day, he ran his Ace-Eight into the pocket Deuces of Sorin Radulescu. The board couldn’t have been better for the Twos, which managed to double up and bust Moorman all in one fell swoop.

Things weren’t looking up for Team888’s Sofia Lovgren, either. She went out of the event early, before any bagging and tagging took place. 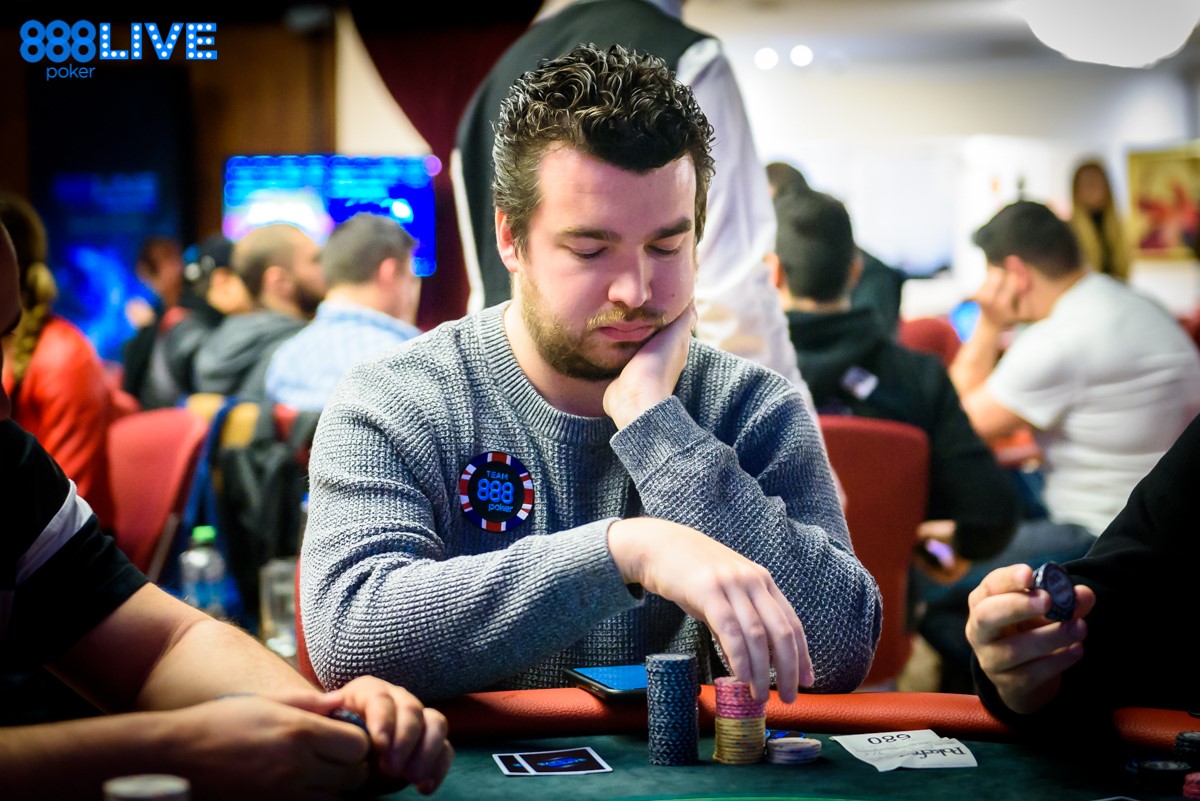 Calling All the Ladies!

The Ladies Event is one that most female players look forward to as it’s a chance to socialise and make friendly contacts in the poker industry. The number of runners was small – only 19, but what they lacked in numbers, they more than made up for in railing and support from other women in the poker room.

This event occurred one day before International Women’s Day, so there was even more pressure and a strong desire to win this one.

And, after several hours of play, Siiri Saar, who already has a few cashes on her home turf and other destinations defeated Mirela Marin heads-up to win the trophy, bragging rights and an 888poker LIVE Barcelona Main Event package. 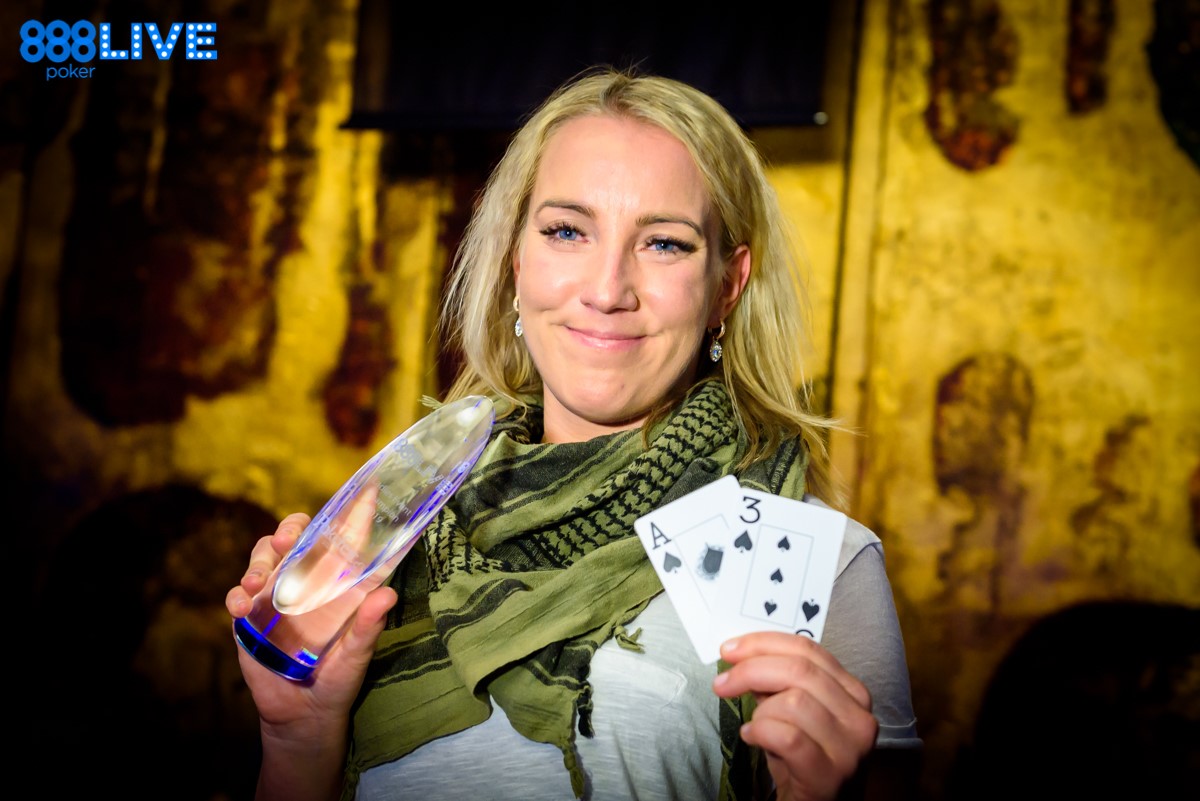 Day 1c was shaping up to be the biggest and most contested one of the four starting flights. 888poker ambassadors, Sofia Lovgren, Chris Moorman and 2014 WSOP Main Event champion Martin Jacobson were all looking to make it to Day 2. 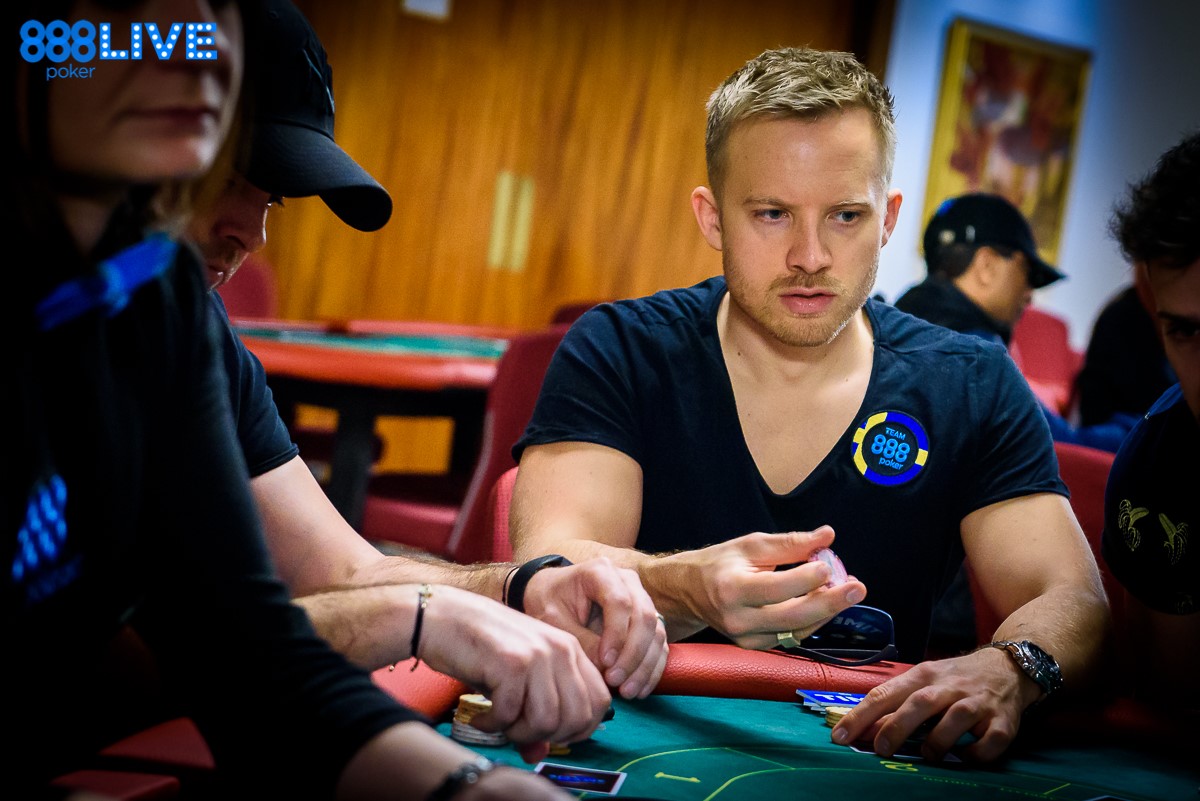 Unluckily Team888’s Martin Jacobson was the first man down when he jammed on the button for 27,000 to a raise by Andrei Spataru, who then re-shoved to isolate. Martin tabled A♣Q♣ to Spataru’s Q♠Q♦. The board brought no relief, Martin found himself on the rail with another wasted bullet.

Although Chris Moorman and Ana met similar fates, it was not the same for Team888’s Sofia Lovgren. The Swede, who recently relocated Singapore, was among the bigger stacks on Day 1c.

At the end of the day, a total of 228 entries made their way to the Intercontinental Bucharest Hotel to play the 2019 888poker LIVE Bucharest Festival €888 Buy-in Main Event. 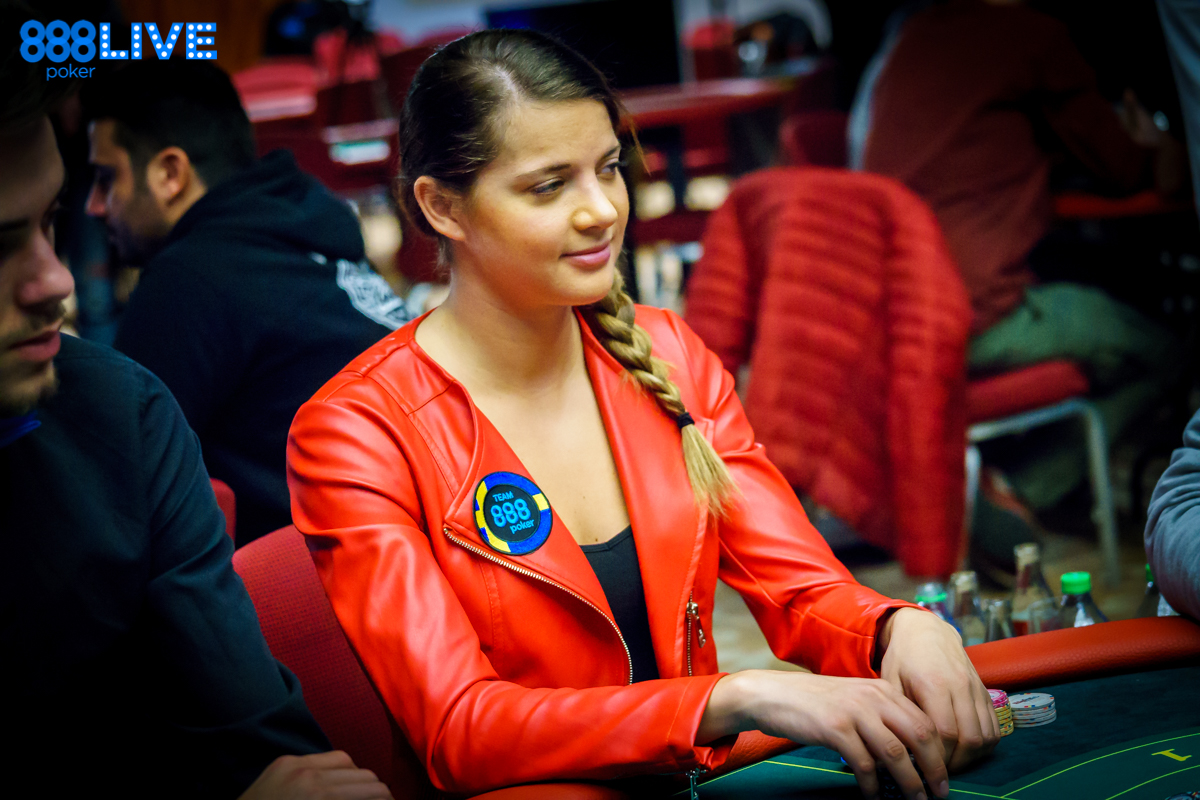 With a whopping 505 entries contributing to a prize pool of €387,638, the guarantee was well and truly smashed at the 2018 888poker LIVE Bucharest Main Event. Not forgetting that there was also a $12,600 WSOP Main Event package on the table.

In action on Day 2 was Team888 ambassador Sofia Lovgren, as well as, Natalia Drytchak, who won the 2018 888poker LIVE London Ladies Event. That win bagged her an 888poker LIVE Bucharest package – so, she was, in a sense, freerolling the event. 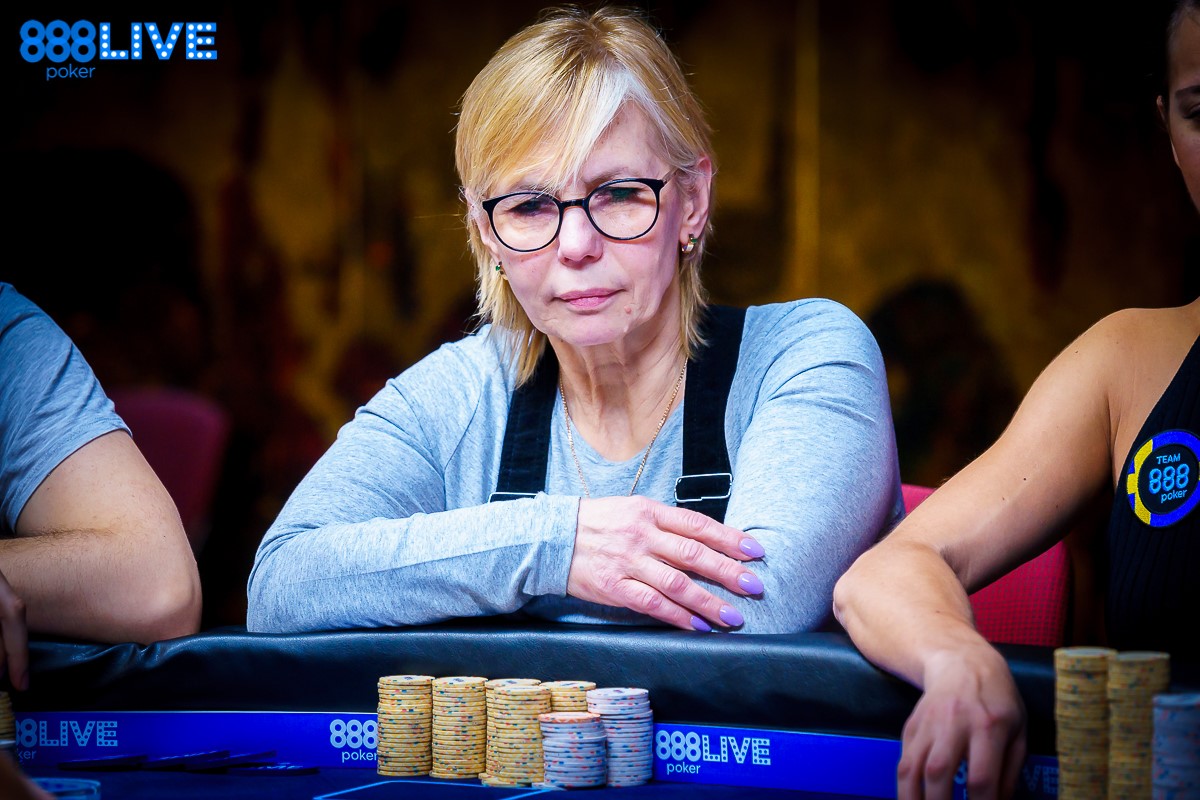 With all of the action that occurred over the first 4 days of the Main Event, the tournament staff had their work cut out for them as they calculated the total number of payout spots, the top place prize and the min-cash. 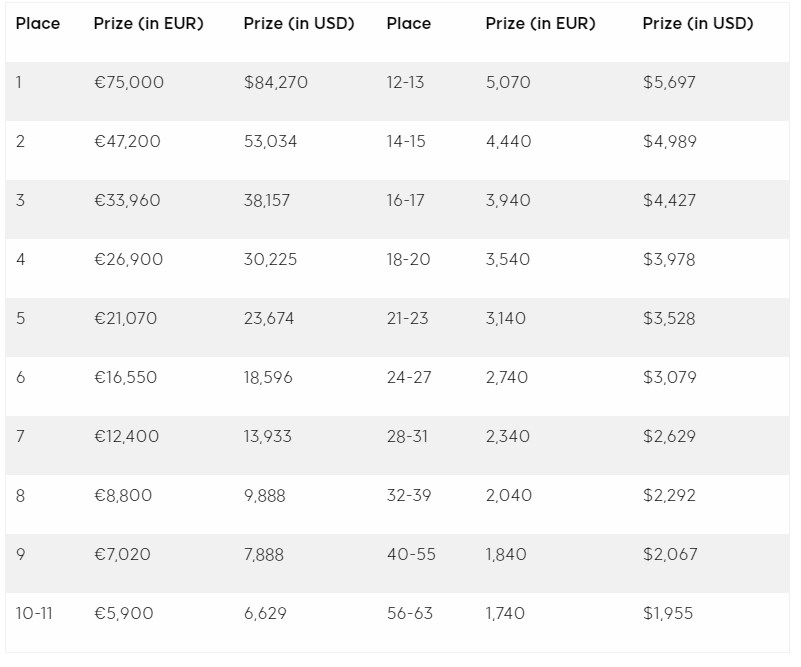 Sofia’s teammates, Chris and Martin fell short of time and of money – both exited the event for the last time. And, despite hanging in there, tooth and nail, through hours of card-deadness, Sofia eventually fell short at the hands of her 888poker LIVE London nemesis – Natalia Drytchak. Natalia had defeated Sofia heads-up to win the Ladies Event in London, which gave her the free trip to Bucharest to play in the Main Event.

That said, Sofia finished in 22nd place and collected a tidy €3,140 for her efforts. A very respectable 28% return on her investment.

However, it was not to be for Natalia. She played a topsy-turvy stack at the featured table and eventually tipped out in 14th place for €4,440. 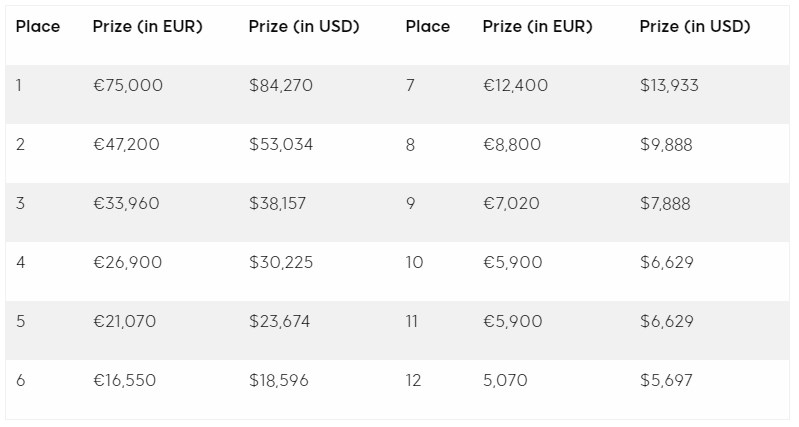 After 3 short hours of play, we had our final table which, despite a Romania-dominated field, ended up remarkably diversified: 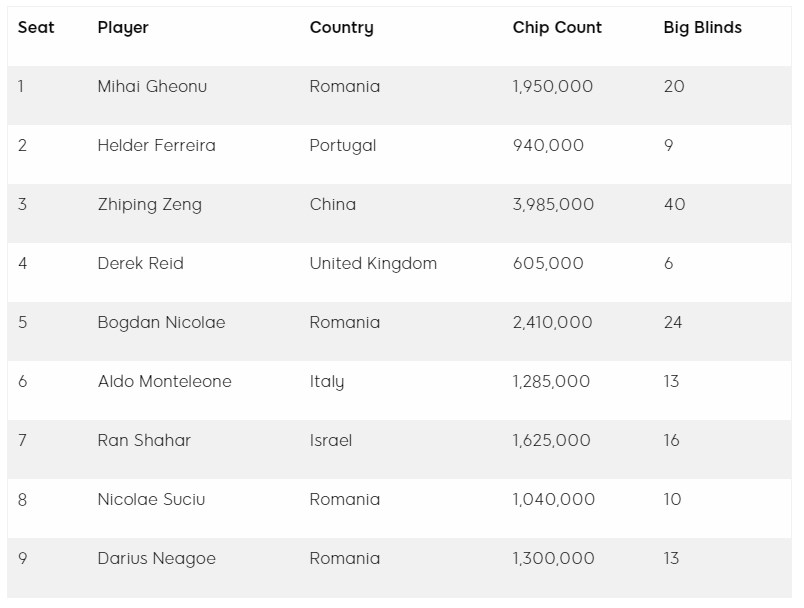 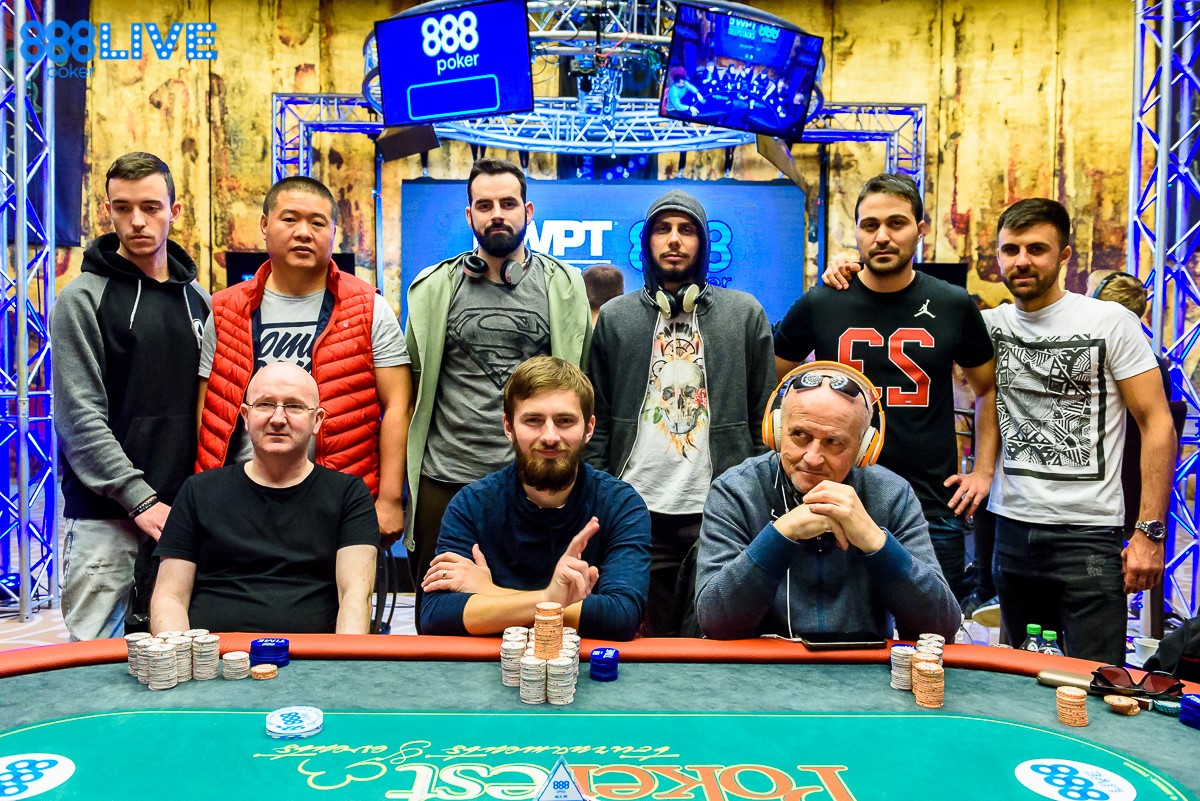 Next up was Ran Shahar, who went head-to-head with chip leader, Darius Neagoe, and lost. He collected €12,400 and 7th place bragging rights for his efforts.

The players went on break before the next casualty was claimed by Daris Neagoe. Nicolae Suciu’s A♠2♥ was no match for Darius’s A♣10♥. He went out in 6th place for €16,550.

Fifth place went to Helder Ferreira, who got very unlucky against Darius Neagoe. His pocket Nines went up in flames when Darius’ pocket Sixes spiked a 6 on the turn and sent him to the rail for €21,070. In fact, Helder had been down to just two BB on Day 2 and still made it to 5th. What a comeback story!

Now it was Bogdan Nicolae’s turn to put a hurting on a player. Mihai Gheonu’s A♦3♥ was no match for Bogdan’s Q♥Q♦, and Mihai headed to the cage to collect his €26,900 for placing 4th. 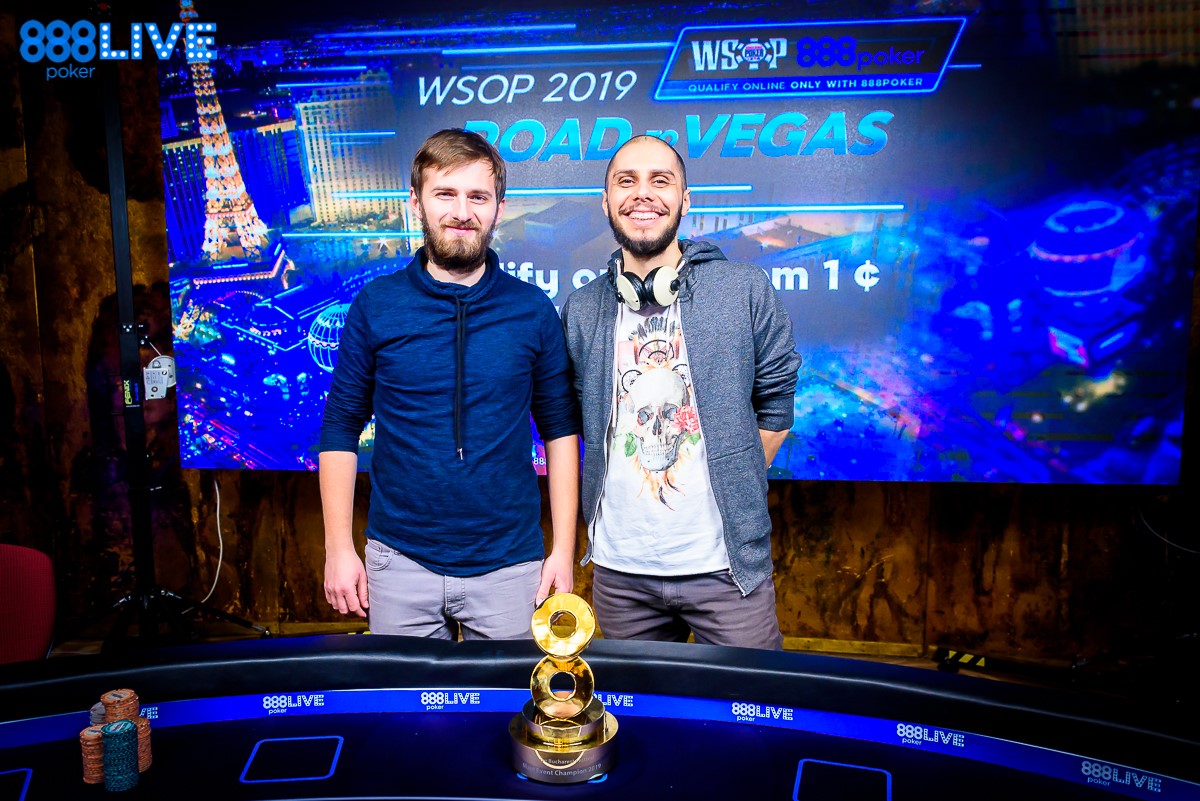 After a short break, Darius and Neagoe and Bogdan Nicolae began their heads-up battle.

However, the curse of pocket Jacks was averted as Bogdan’s pair held up, and the stacks were about even:

Directly after that hand, the players took another break to discuss a deal.

Based on ICM calculations, the remaining prize money was split in the following fashion, and they would play for the $12,600 WSOP Main Event package and the trophy:

Fifteen minutes later, Bogdan found himself all-in and at risk, once again. After getting it all in the middle with pocket Tens, Darius made the call with K♥J♦.

Neagoe spiked his Jack right on the flop and with the Tens not able to improve, Darius claimed the title, trophy and WSOP package. 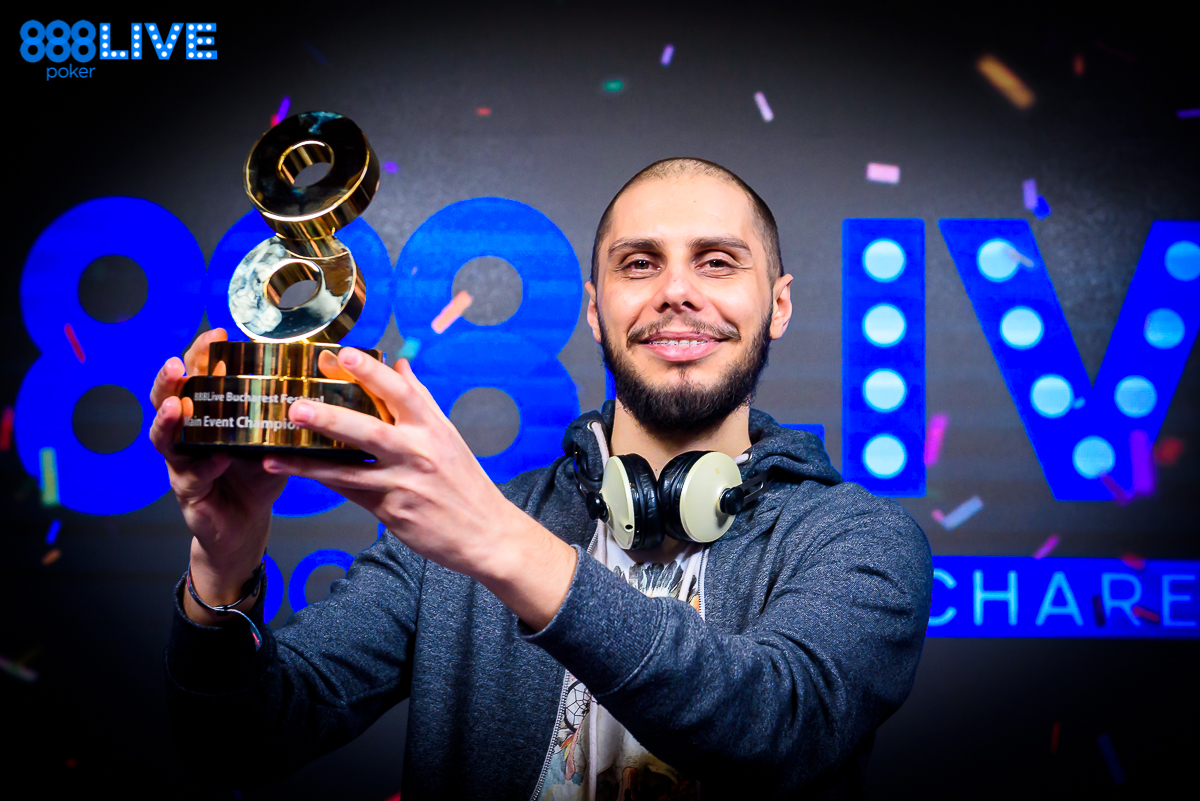