The top 888poker 8-Team will represent their country in the 2018 WSOP Main Event with the best player winning a $15,000 prize for their team. 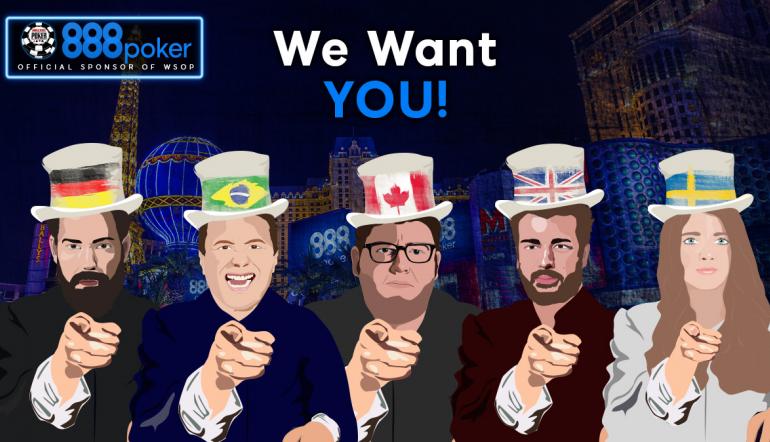 In 2017, a crack poker unit is sent to Las Vegas by an online poker site for plays they did commit. These men and women promptly defy the odds to the make the final table. This is “The 8-Team.”

Big changes are in store for the 2017 World Series of Poker, which will once again be sponsored by 888poker. Yesterday, WSOP officials revealed both a new television deal and the retirement of the Main Event November Nine, instead opting to play it out in July. Following in their footsteps of big announcements, we’re happy to reveal “The 8-Team.”

We’ve managed to build five amazing teams, each from a different country and featuring a team captain, wing man, and a qualifier. The teams – which are comprised of the UK, Germany, Canada, Brazil and Sweden – will all participate in the 2017 WSOP Main Event. The qualifier that does the best (determined by who reaches the highest spot in the tournament out of the 5 team qualifiers) will win a package to 2018 WSOP Main Event.

The qualifiers for each team may be eligible by winning a WSOP Main Event package through 888poker (terms and conditions). Their status will then be determined by June 28th, which will include verifying residency in the relevant countries - while the wingmen will be revealed in the coming weeks.

Today, we’re happy to reveal to you the captains for each team.

In the history of online tournament poker, no one has been more successful than 888poker Ambassador Chris “Moorman1” Moorman, who has roughly $14 million in lifetime earnings. Moorman also has more than $4.6 million in live tournament earnings including a career-best $1,068,690 for finishing runner-up to Elio Fox in the 2011 WSOP Europe Main Event.

In 2014, Moorman notched his first major live win by taking down the WPT LA Poker Classic for $1,015,460. Aside from captaining Team UK this summer, Moorman is looking forward to releasing his second book, Moorman: The Inside Story of the Most Successful Online Poker Player of All Time.

If there’s any captain who can lead their team to a deep run in the Main Event, it’s 888poker Ambassador Bruno “Foster” Politano. The Brazilian rose to fame three years ago when he finished eighth in the 2014 WSOP Main Event for $947,172.

While he missed out on a bracelet in that tournament, he managed to get his piece of gold jewelry last year when he won the WSOP International Circuit Sao Paulo Event #8: R$2,300 Pot-Limit Omaha for $36,514 and a ring.

Parker will be seeking his first WSOP cash this summer, but don’t let his lack of Vegas experience fool you. While he plays primarily online, “Tonkaaaa” has amassed $246,368 in live tournament earnings, which includes $180,909 for finishing seventh in a Barcelona €25K High Roller last year.

Earlier this year, Lövgren made her first trip east to the gaming mecca Macau. While there, she finished 44th in a big Macau championship event for $12,996. Ten days later, she placed 10th in the 888Live Easter Edition London for $1,018.

Last year, Lövgren had a bit of WSOP success too after she almost made the final table of the Millionaire Maker… out of 7,190 entrants! She ultimately fell in 12th place, good for a career-high $75,109. She’s fierce, talented, and looking to lead the Swedes to victory this summer.

Few players have come on as strong in recent years as 888poker Ambassador Dominik Nitsche. The three-time WSOP bracelet winner and LAPT champ has amassed more than $6.5 million in tournament earnings dating back to 2009, and he’s added to that with plenty of online scores. That includes making a three-handed deal in last September’s Super XL Series Main Event for $206,400.

We’ll be revealing one wingman at a time on different platforms in the coming weeks, so be sure to stay tuned to all things 888poker to see who makes “The 8-Team.”