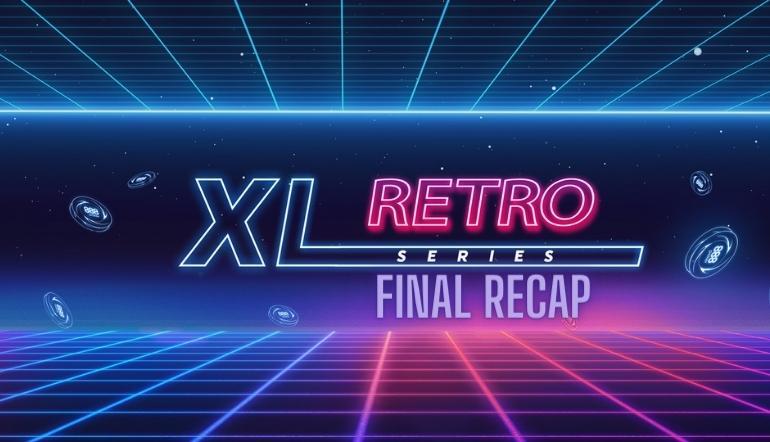 The XL Retro Series kicked off on 888poker back on October 9 and wrapped up on Tuesday after more than two weeks of intense action. The 27-event series catered to a combined 10,951 entrants and awarded $1,497,135 in prize money.

Players from Brazil have performed the best having captured an astounding seven titles, while Canadian players had six. The only other country to win multiple titles was Sweden with two.

Players from Germany, Malta, Finland, Uzbekistan, Ukraine, Lithuania, Mexico, the Netherlands, Montenegro, Ireland, and the United Kingdom all had one apiece.

On Monday, the 415 surviving players from each starting flight returned for Day 2 action. But with only 240 slated to pay out, 175 of them would leave empty handed.

Among those to fall before the money were the following –

After “beroduain” bubbled in 241st place, the in-the-money finishes mounted, including the following players –

Brazil’s “Rochinh2011” was also over the three-million-chip mark with 3,157,162. Their fellow countryman “crizelda” was the only player under seven figures sitting on the short stack of 905,736.

On Tuesday, the final nine players returned to battle on a live-stream final table. Straight out of the gate, it was Brazil’s “kryingkid” who got off to a hot start, scoring two of the first four eliminations to vault into the chip lead.

With five players remaining, “DragoDanzig” got it in with ace-ten and was primed to double against the king-ten suited of “raw_dawg”. But the latter made a flush to score their first elimination of the day. They’d notch the next two as well to set up a “raw_dawg” versus “kryingkid” heads-up match.

“kryingkid” had to settle for second place and $51,213 in prize money. “raw_dawg” became the XL Retro Main Event champ and laid claim to the $70,164 first-place prize.

Among those to compete but fail to cash were 888poker ambassador Ian “Simpioni” Simpson, “cherrywine”, and bubble boy “LHollanda”.

Not only was 888poker StreamTeam Member Jordan “BanfieldJ” Banfield at the final table, but he also made his way to heads-up play against Germany’s “DrAyip”.

After nearly six hours of play, Brazilian player “Th3PuDa” claimed the title for $13,84.22 and Brazil’s seventh title of the XL Retro series!

On Saturday, October 22, the $1,050 buy-in, $45K GTD Event #23: Volcano attracted 35 players who accounted for three rebuys. The $45,000 prize pool was reserved for the top six finishers, and among those to compete but fall short of a cash were “Destroyer300”, Niklas “tutten7” Åstedt, and bubble boy “Inflaatio”, just to name a few.

It took ten minutes shy of the five-hour mark for a winner to emerge, and it happened when the Netherlands’ “raisebot” bested Ukraine’s “feerofeero” in heads-up play. Ther former received $16,650 for the victory, while the latter had to settle for a $11,250 consolation prize.

In the end, Ireland’s “9salute46” defeated Ukraine’s “feerofeero” in heads-up play to win the tournament outright for $48,750. It was the second day in a row that the Ukrainian finished in second place.