What is a Bomb Pot in Poker?

A bomb pot is where all players agree to place an additional ante into the pot at the beginning of the hand before cards are dealt. 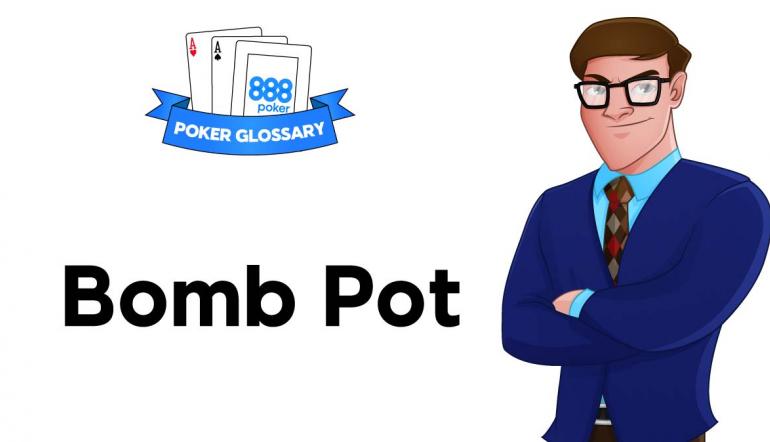 A bomb pot is where every player at the table agrees to ante a specific amount of extra chips before any cards are dealt. After the cards are dealt action often proceeds straight to the flop.

Play proceeds as normal from the flop onwards, but naturally the pot is much bigger than usual. There are also many more players seeing a flop than there would usually be.

Bomb pots are designed to generate action and bring excitement to the game.

How Does a Bomb Pot Work?

Each player places an additional ante into the pot before being dealt cards. In most games the flop is then dealt (leaving no room for preflop action).

This means that not only is the pot larger than normal, but every single player at the table is still alive on the flop. Action continues normally from this point onwards (although the action is anything but normal).

On one hand the SPR (Stack to Pot Ratio) is much lower than normal, which would typically mean we should commit wider. On the other hand, there are more players seeing a flop meaning strong hands are more likely. Depending on the number of players we may find ourselves needing to commit with quite a tight range despite the shallow SPR.

We should generally stick to very simple guidelines such as getting the chips in with top-two pair or sets plus postflop (although it depends on the exact stack depth and board texture). We can make very small protection bets with hands weaker than this, especially if we have position on most or all of the other players.

Unlike straddling which is mathematically non-profitable, it still might be possible to profit in bomb pots since every player has an equal disadvantage to start the hand (everyone posts the same ante amount).

Bomb pots will typically be less profitable than regular pots in the long run however since we are forced to pay a lot of extra rake and enter the pot with any 2 cards. In some games this disadvantage might be insurmountable enough that the entire table ends up losing on bomb pots in the long run, the only winner being the house.

Bomb pots are also extremely high variance since we are often forced to get our entire stack in postflop while facing several opponents.

When Do Bomb Pots Happen?

The exact rules of this depend on the game. For example, some casinos might run bomb pots on every change of dealer. In online games bomb pots often happen at random intervals. In home games a bomb pot might just happen if everyone agrees to it.

Bomb pots are a little bit like straddles except for the entire table places a straddle.

The other key difference is that the action proceeds straight to the flop meaning we will be playing in a large family pot.

The larger pot size means we’ll be playing at a lower SPR. Why not check out this article on SPRs for more information?