What is Expected Value in Poker?

Expected value refers to the amount of money we can expect to win/lose on average after making a certain decision at the poker tables. It has the exact same meaning as expectation. A poker decision that is expected to make money in the long run can be described as a decision with a ‘positive expected value’ or “plus-EV” (+EV) for short. Although our results will rarely conform to our expected value in the short term, good poker players realise that the expected value of a decision is far more important than short term results. 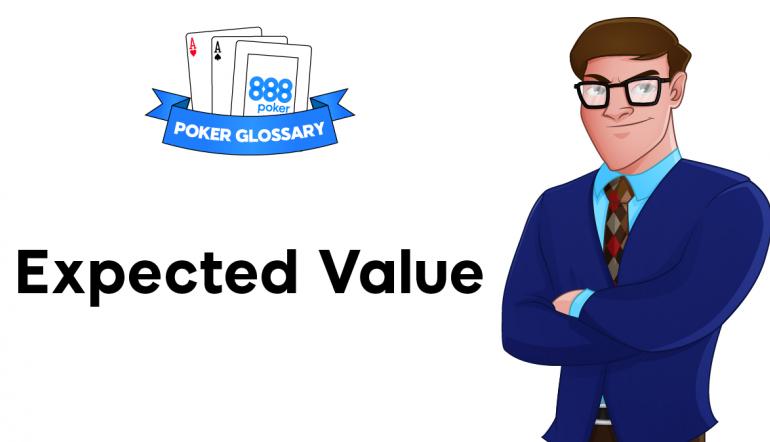 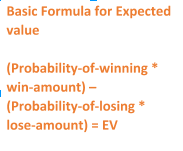 This value is a mathematical term used to describe the expected average result of a given poker scenario.

Let’s see usage of the formula illustrated with a Hold’em example.

We are on the turn facing an all-in bet of $50 into a pot of $100. We expect to have about 40% pot equity vs our opponent’s range. What is the expected value of a call?

Let’s start by defining the four variables that make up the formula for expected value.

Let’s plug the variables into the EV formula. Note that percentages must be expressed in “decimal” format (divide them by 100 first).

When dealing with brackets, it’s important we always first compute the value of the brackets before performing any of the other mathematical functions.

We should hence expect to make $30 on average every time we make this call.  This checks out because according to our pot-odds we should have a profitable call so long as we have more than 25% equity.

The calculation above is an example of very straightforward EV calculation. It was relatively simple for at least two reasons:

1) We don’t need to factor in additional variables such as fold-equity
2) Our call is “all-in” meaning we don’t to account for complex variables on the river.

Let’s see a slightly more complex example where we need to take into account both pot-equity and fold-equity.

There is $100 in the middle on the turn. We semi-bluff all-in for $50. We expected to have 20% equity when called and we expect our opponent to be folding around 30% of the time to our bet. What is our expected value?

One way of solving these types of problems is to break them down into all of their possible outcomes along with their  respective profits/losses.

Note that we can establish the probability of successive events (i.e. villain calls and then we win), by simply multiplying their respective probabilities together (when expressed in decimal format). Our opponent calls 70% of the time against our bet and we will suck out on the river 20% of the time. Hence:

The basic EV formula can be expanded to include a separate bracket for every event. 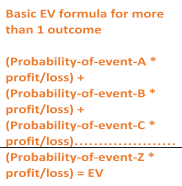 Let’s plug the information regarding the three events into a three-bracket formula.

Note that the bracket that represents event-C uses a negative integer to show losses.

The turn semi-bluff hence still generates a positive expected value of $23 despite the fact that we have less equity than in the first example. This helps to illustrate the value of having fold-equity when we play our draws aggressively as opposed to passively. If we were instead facing a turn bet in the above example rather than betting ourselves, we would not be getting the right price for a +EV (positive expected value) call.

The above level of complexity is presumably the limit for humans calculating by hand. It’s not that humans don’t have the ability to deal with more complex scenarios, it’s simply an issue of practicality. It doesn’t make sense to perform long-winded calculations by hand when we have the option to generate precise expected values for complex game-trees with the benefit of computer assistance.

The most popular commercially available software designed to calculate expected value for complex game-trees is CardrunnersEV. (Note that a game-tree is simply a diagram detailing all of the possible actions that can be taken during a hand of poker – they can get very big very quickly).

Example of Expected Value used in a sentence -> (Hold’em) We had Aces preflop, so that decision definitely carries a positive expected value.

How to Use Expected Value as Part of Your Poker Strategy

A solid understanding of expected value is important for high level play. Good players not only know which plays are likely to carry a positive expected value but also  can generate a rough idea regarding exactly how profitable these plays are. Novice players might be able to guess at the best line, but they would typically be hard pressed to make an estimate regarding the precise EV.

Let’s see a very simple example of this (one where the precise EV should be known without calculation).

Villain shoves all-in for $50 into a $100 pot on the turn. We expect to have 25% equity and make the call. Calculate the following -

a) We are getting the precise pot-odds we need given that we have 25% pot-equity. This means that our expectation will be precisely 0.

b) Folding always has an expectation of 0. It’s extremely important to understand that this expectation of 0 is relative to the current decision point. It does not mean that we break even for the entire hand.

It’s important to differentiate between relative and absolute expectation when discussing expected value. It might surprise many players to learn that making a “break-even” call with a draw, results in a loss for the overall hand. This is not to say that calling is a mistake, simply that the cards fell favourably for our opponent and we ended up making a loss. While we have some measure of control over our relative expectation, our absolute expectation is often just a measure of how we are running during a given hand.

Being able to make rough estimates regarding our EV is useful because it allows us to make distinctions between two profitable lines. It’s possible in poker for more than one option to generate a positive expectation. In such instances a good player will always select the line that has the highest expected value – described in the industry as “max-EV”.