What is Action in Poker?

Action refers to playing the game of poker or any other activity involving making bets, such as prop bets and side bets. Action can also be used to describe any of the different betting options that take place during a hand of poker. Bet, Raise, Call and Fold, are all examples of different actions that happen in poker. 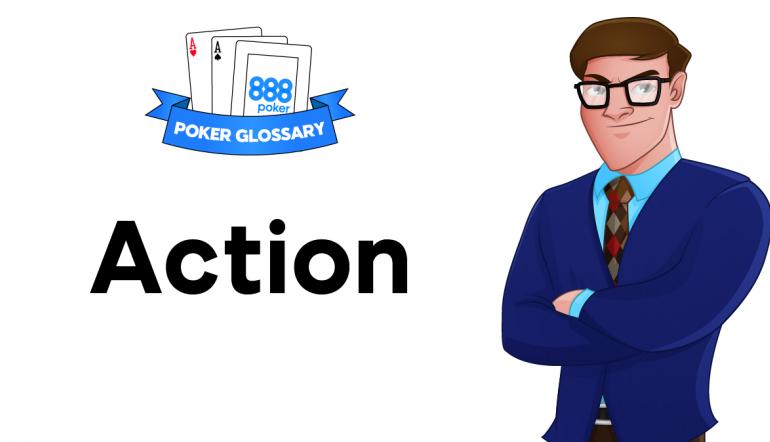 Learning the basic legal actions is one of the first steps in learning to play poker. Here we will briefly review the different actions.
Bet – To make a wager and place it into the pot. “Betting” implies that there have been no other wagers made on the current street. If other wagers have already been made then we use other terminology such as “call” or “raise” to describe a wager we make.

Call – If a player makes a wager on the current street we have the option to match that wager precisely by calling. Note that since a wager has already been made we must at least match that wager or declare ourselves out of the hand by folding.

Fold – Folding means we discard our hand and forfeit all right to winning the pot. We choose this option when a wager has been made before us on the current street and we don’t wish to invest additional chips into the pot.

Check – Check means the action continues to the player on our left without us making any wager. This is only a legal option if no bet has been made before us on the current street since we’d then either have to call, fold, or raise. Checking is not typically an option preflop (unless we are in the BB) because we need to at least match the BB’s investment of 1 big-blind if we wish to continue with the hand.

Raise – A wager has been made before us on the current street and we wish to increase the size of this wager. For example, perhaps one of our opponents makes a bet of $50 and we raise the size of the bet to $100. The initial bettor must at the very least call an additional $50 if he wishes to continue in the hand. His other options are to fold or re-raise.

There may be some amount of leeway in terms of interchanging the above terms. I.e, we might get away with describing a bet as a raise, or a raise as a re-raise. While most players at the table will understand what we mean if we describe the first bet on a certain street as a “raise” (rather than a “bet”), this is usually an indicator of inexperience.

Example of Action used in a sentence ->The high stakes games have dried up in my local casino, so we are headed to Vegas in search of some action.

Actions in poker are often chained together to describe the entire line taken on an individual street, or through the entire hand. Examples -

Check/Check – Implies the action on a certain street gets checked through, i.e no wagering takes places.

Bet, Bet, Check – Describes a line taken across three streets were a player bets the flop, bets the turn, and then checks the river.

Raises in poker are also assigned numbers to help us easily understand where appear during a betting sequence. Examples -

Here is an example of a flop situation with player A and player B. No betting has occurred but player B has position.

Sometimes preflop play in variants such as Omaha and Hold’em confuses players. A raise when facing an open is referred to as a “3bet” and not a “2bet”. This is because the mandatory big-blind payment counts as the first bet of the sequence. This is why we describe an open as an open-raise not an open-bet. And open-raise can hence also be described as a “two-bet”.

How to Use Action as Part of Your Poker Strategy

Good players use a precise combination of different actions to generate their highest possible winrate. Decision making in poker is extremely nuanced and relies on a significant number of variables. As such, simplification and generalization of the reasons behind taking each action is difficult, but it is still possible to list a few key generalisations.

Put simply, some types of hands like bigger pots while others prefer to either keep the pot small or get out of the action entirely by folding. There is a reasonable correlation between the strength of our hand and the size of the pot we’d like to play. Big hands prefer big pots, medium hands prefer smaller pots, and weak hands prefer very small pots or folding.

Of course, this doesn’t tell the whole picture since additional variables must be considered in deducing the best strategy. For example, medium strength hands may still sometimes play aggressively despite the fact that they don’t like to play large pots. This would occur in a situation where our medium strength holding is vulnerable to being outdrawn and needs to protect its equity.

We might also choose to play a strong hand passively if our opponent has the tendency to bluff when sensing weakness.