What is Hanger in Poker? 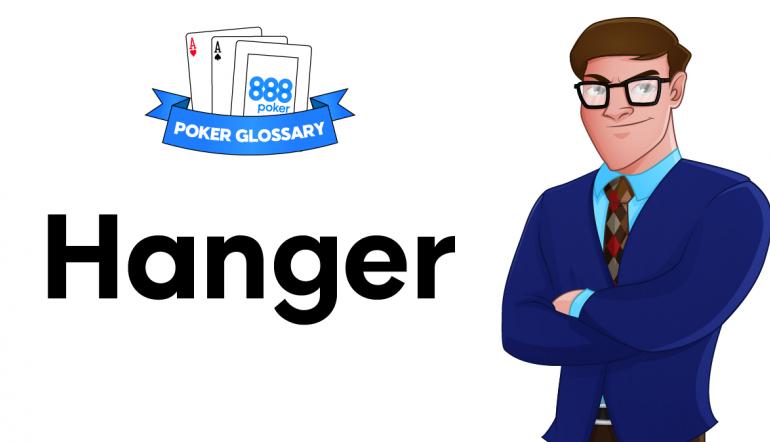 A “hanger” is an unintended protrusion of the second to last card in the deck when base dealing. An understanding of base dealing is helpful in fully appreciating the concept.

Normally a dealer should be dealing cards from the top of the deck. This is simply how dealing works, drawing cards from anywhere else in the deck is at best bad etiquette, but in most cases indicative of cheating. Base dealing refers to a sleight of hand technique where a dealer deals from the bottom of the deck, while making it appear to onlookers that the cards is being dealt from the top of the deck. The top card is even pulled partially out of place to help create the illusion. The bottom card is then snapped from the bottom of the deck as the top card is reset to its original position.

When performed correctly, only an expert card mechanic might notice the difference between regular dealing and base dealing – for example, base dealing creates a slightly different sound compared to regular dealing. But sometimes, even experts could make a mistake, pushing the second to last card slightly out of place as the bottom card is dealt. This is referred to as a “hanger” and is one of the big indicators that the dealer might be base dealing. After all, if dealing from the top of the deck, there would be no reason at all why the bottom card of the deck would be pushed out of place.

The term “hanger” was most notably drawn into the public eye during the move Rounders where Worm catches a hanger while base dealing in the cop’s game.

Example of Hanger used in a sentence -> They had gotten away with cheating for quite a while before Worm caught a hanger in the cops’ game.

How to Use Hanger as Part of Your Poker Strategy

It’s worth remembering that the temptation to cheat is something that affects many poker players. We should never be so naïve to assume that it is impossible that the dealer is cheating. Think about the following -

1. Be wary about playing in live games where your opponents are not trusted.

2. Watch some basic videos on base dealing and learn how to recognize it, including what the card mechanic grip looks like.

3. Understand that variance is big in poker, but also pay special attention to players who appear to be on suspiciously lucky winning streaks.

Learn a few card mechanic tricks is a cool way to impress friends, especially when it is our turn to shuffle the deck. Remember however, that using the learned skills to influence which cards fall is cheating. Not only is cheating unethical, but there could be serious consequences if a cheating attempt is uncovered, ranging from a good beating to legal action.