What is a Hyper Turbo in Poker?

Hyper Turbo - A type of poker tournament (or sit and go) with an extremely fast blind structure and shallow starting stacks. 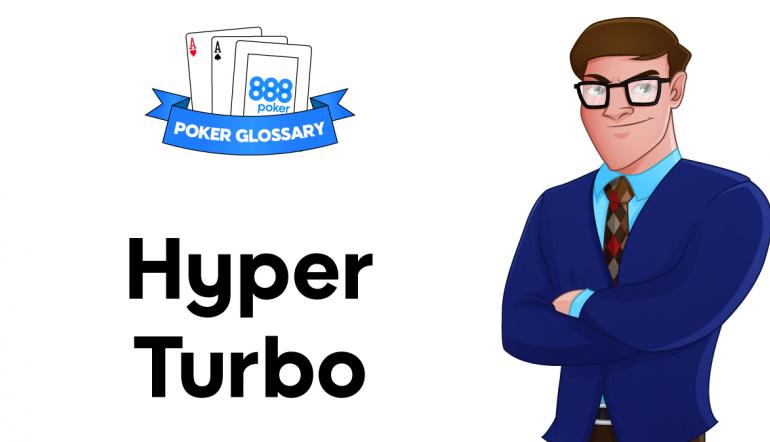 A hyper-turbo is a type of poker tournament (or sit and go) with an extremely fast blind structure and shallow starting stacks.

Due to the rapid nature of these tournaments it’s nearly always necessary to get the stacks in early and hope for a double up. There is very little room for significant postflop decisions and often the stacks are shoved preflop.

What is the Difference Between a Turbo and Hyper-Turbo Tournament?

What are the Blind Levels and Starting Stacks in Hyper Turbos?

Are Hyper Turbos SNGs or Tournaments?

The term hyper turbo simply refers to the blind structure and so could be referring to either a SNG or an MTT.

What is the Best Strategy for Hyper Turbo Tournaments?

We are looking to steal the blinds extremely aggressively and double up early where possible. This is contrary to standard tournament strategy where we are looking to play tight in the earlier rounds and loosen up as we approach the bubble. Playing a hyper turbo tournament is a little bit like starting very close to the bubble with the tighter earlier stages of the tournament completely removed.

Surprisingly, they can be. Although the fast blind structure is believed to reduce the ability to utilize skill edge fully, this is offset by the fact that hyper turbo tournaments attract many recreational players. Slower deep stacked tournaments generally attract a higher proportion of competent players. Although hyper turbos entail a lot of variance this can be offset through playing lots of events.

Is Strategy in Hyper Turbos Different from the Same Stack at Regular Speed?

A tournament with a hyper turbo structure has very fast blind levels and often shallow starting stacks. Unlike regular tournaments it won’t be possible to play tight on the earlier betting rounds. We should be looking to steal the blinds aggressively and double up as soon as we get a reasonable opportunity. Why not check out this 888poker article for general tournament strategy advice?