A wrap around straight is a straight that has an Ace somewhere in the middle of its structure, for example; QKA23. Wrap around straights are not legal hands according to the classic hand rankings system. However, they may sometimes be allowed in home games and some of the more exotic variants of poker. 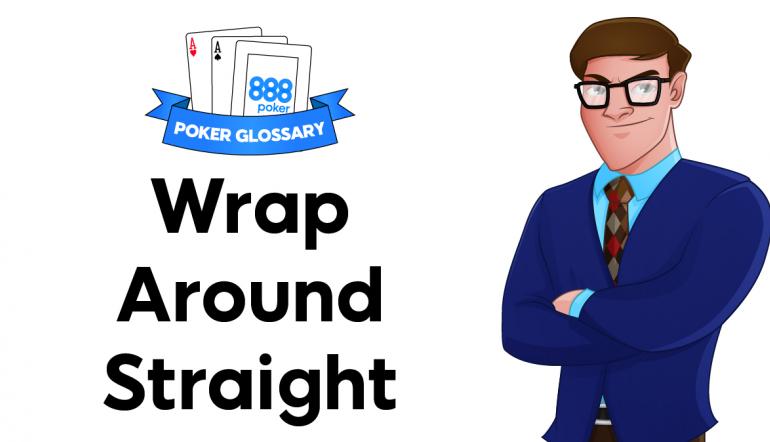 Explanation of Wrap Around Straight

Wrap around straight draws are more commonly referred to as “wraps” and apply to Omaha based games.

A “wrap” in Omaha is a term used to describe any straight draw with more than 8 outs. These types of draws are impossible in Hold’em with the maximum number of outs being 8 for the open ended straight draw.

Wraps are extremely important in Omaha since the regular 8 and 4 out straight-draws are often considered to be little more than garbage. Wraps are powerhouse hands in Omaha, especially in situations where they are accompanied by a flush draw or backdoor flush draw. Due to the sheer amount of outs some of these combo wrap draws have, it’s possible for them to be equity favourites even against strong made hands. Standard nut wraps often have 9, 13, or 16 outs, but it is possible for them to have as many as 20.

At least, they can’t fall into the middle of the construct in the majority of games. There is no reason why players can’t allow such hands to be legal in their private home games or as a standard feature in some of the more exotic poker variants.

These are no different from regular straight draws apart from the fact that we are now playing in a game that allows wrap around straights. Similar to other variants we can further differentiate between gutshots (QK23) and open ended straight draws (QKA2).

Wraps are extremely important holdings in Omaha. For a fuller understanding on computing the strength of various wraps, check out the glossary entry under wrap.

Most players need not concern themselves with the other type of wrap around straight (Q,K,A,2,3) simply because they are not legal hands in the vast majority of poker formats. Assuming they are defined as legal by the variant rules, they play very similarly to other types of straight draws. It’s worth making sure everyone at the table is clear on the hand rankings for wrap around straights to avoid any nasty surprises. Presumably JQKA2 (two-high) is the weakest possible straight, but it might be that not all players at the table see it that way.