What is Draw in Poker? 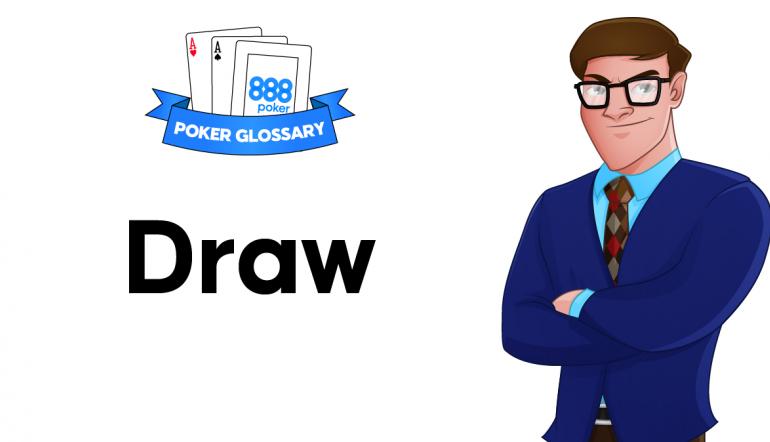 The main types of draw in poker are the straight-draws and flush-draws. Straight-draws are usually broken down into “open-ended” straight-draws and “gutshot” or “inside” straight draws. Open ended draws are where we can hit a card either at the top or bottom of our run in order to make a straight (i.e 5678) whereas gutshot draws required us to hit a specific card in the middle of our run (i.e 5689). open ended straight draw are hence better than gutshots because they have more outs in order to make a straight.

At the stronger end of the spectrum combo-draws and wraps are both types of big draw. A combo-draw can be used to describe any draw with multiple facets. In Hold’em it’s possible to hold a flush-draw the same time as a straight-draw. Combo-draws are especially common in Omaha variants of poker due to the player being dealt four hole-cards preflop. Four hole-cards also flop us the ability to make wraps; straight draws which are even more powerful than open-enders. Here is a quick example of a wrap in Pot Limit Omaha.

In this example Omaha hand any 6, 9, T, or J will give us a straight. That’s a total of 13 outs to make the nut straight.

Although draw games do not make use of community cards, it’s possible to gain insights into a players hand strength by the number of cards they draw. For example, a player who replaces one card in Five Card Draw often holds a flush-draw/straight-draw and is trying to hit. If he replaces three cards he may often have a pair in the hole and is looking to make trips.

A popular draw variant of poker is the “Deuce to Seven Triple Draw” which is a lowball variant. Lowball poker awards the pot to the lowest ranked hand.

Example of Draw used in a sentence -> Our opponent made a large bet, but we had the nut flush draw and weren’t ready to fold.

How to Use Draw as Part of Your Poker Strategy

It’s possible to generalise regarding correct strategy of draws without being tied down to a specific variant of poker.

Firstly, draws are not made hands. With the exception of some of the big combo draws in Omaha, if we ourselves hold an unpaired draw, we will behind any made hand in terms of equity. This means that the only reason we would choose to play our draws aggressively is if we expect or opponent to be sometimes folding.

In variants, or vs opponents where we expect to have zero fold-equity, there is little benefit to playing draws aggressively since we are essentially investing more chips into the pot with what amounts to the worst hand. In such scenarios we should be content to play our draws passively and defend against bets only if we have the pot-odds/implied-odds to do so.

In many variants we will be able to generate folds by playing our draws aggressively however, and this often increases our expectation when compared to passive play. Sometimes our opponent will fold, and even if he doesn’t, we may sometimes make our draw and get a payout in an even larger pot.

Big combos draws in PLO can sometimes be so powerful that they actually have more equity than the nuts. It’s ok to play such big draws aggressively even without fold-equity, simply because we expect to be a favourite when the chips go in.

The strength of any drawing hand should not necessarily be determined by its number of outs. We also need to consider the quality of our draw. Draws to the nuts are nearly always better than non-nut draws, even if they have fewer outs. This is because we benefit from excellent implied odds when we hit. Non-nut or dominated draws must be played carefully, since it’s not ideal to make our draw only to lose to a better draw.

“Disguised” draws are also more profitable than obvious draws. For example, there is big difference between the following two scenarios in No Limit Hold’em.

Although we hold the exact same straight in both examples, there is a big difference in relative hand strength. In the first scenario we use both of our hole-cards to make the straight while in the second scenario we use only one of them. It’s actually somewhat obvious that we might have a straight in the second example, making it less likely that our opponent will pay us off with worse. Also note that we have the nuts in the first scenario, whereas a higher straight (QJ) is possible in the second scenario.