Maybe this is why so many celebrities choose it as their favourite pastime? Fed up with the fake fur and Sneaky Pete's of the world, perhaps the poker table is the only place they can exist without the mask. 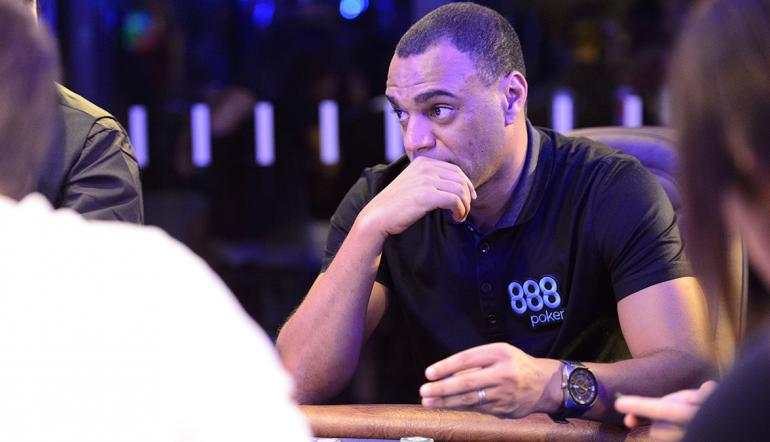 If you arrive at the Nou Camp hoping to talk about the foibles of life with Neymar, you're more likely to be talking to the hand of his bodyguard.

But poker is different.

Poker is a great class equaliser.

It breaks down barriers, removes human shields, and allows people from all walks of life to commune and chew the fat. Hell, it's a game that the leaders at the United Nations should play.

Maybe this is why so many celebrities choose it as their favourite pastime? Fed up with the fake fur and Sneaky Pete's of the world, perhaps the poker table is the only place they can exist without the mask.

I could reel off a list of 50 celebrities spotted at the poker tables throughout the years, but these thirteen stars of sport and entertainment are the ones we have seen more frequently.

Michael Phelps is the Phil Ivey of the Olympics amassing 28 medals, 23 of which are gold. He is a born winner and learned how to play poker when sharing a house in Baltimore with professional poker player Jeff Gross.

“Mike is easily one of the best celebrity poker players around,” Gross once told Card Player magazine.

With Phelps having retired from the professional swimming scene perhaps we will see him more frequently at the poker tables?

Phelps has been spotted playing tournaments in the Bahamas, and the World Series of Poker (WSOP) in Las Vegas.

His best score to date was a fifth-place finish in a $1,570 No-Limit Hold'em event featuring 187 entrants in the 2008 Caesars Palace Classic.

Kevin Hart, one of the most successful comedians and actors in Hollywood, surprised everyone when he appeared at a live event held in the Bahamas in January of this year.

Was it a one off?

It seems not, as Hart returned to the tables in Monte Carlo where he announced a partnership with Stars. Hart wants to unite the world with laughter, and he sees the poker community as the perfect example where people from all cultures can co-exist and have fun.

Hart has played in the Dan Bilzerian home game as well as mixing it up with the High Rollers of the world circuit. He hasn't cashed in one yet, but if he puts half as much effort into his poker game as he does in every other area of his life, then it's not a long time coming.

The credibility of poker moved up a notch when the Global Poker League (GPL) Team Manager, Maria Ho, managed to convince Aaron Paul to join the LA Sunset.

The former Breaking Bad star only played twice, winning both matches, but showed the world a commitment to the game unheard of in previous years from celebrities by putting his name and face to our premier league.

Aaron Paul also showed up in a poker advert facing off against Cristiano Ronaldo and has featured in the WSOP and live events in the Bahamas.

I expect him to compete in more events in 2017, bitches!

We shouldn't be surprised that Gerard Pique loves his poker. The former Manchester United defender learned his trade while playing alongside the likes of Darren Fletcher, John O'Shea, and Wes Brown during his time at Old Trafford.

Now at Barcelona and a mainstay in the Spanish national team, Pique is one of the most successful footballers in the world. He also snuggles next to the Colombian songstress Shakira at night.

Pique has been spotted competing at the WSOP and also the defunct European Poker Tour (EPT). What sets Pique apart from most of his fellow athletes is he appears on the felt while being at the height of his powers on the football pitch.

Neymar Jr and Cristiano Ronaldo have both represented a prominent online poker room in the past, but what sets Neymar apart from the Real Madrid star was his presence in and around the tables.

While Ronaldo primarily surfaced in pre-arranged digital media promotions, Neymar Jr showed that he loves the game by supporting the likes of Bruno Politano and Felipe Ramos, as well as making appearances at the WSOP and EPT Barcelona.

James Woods makes the cut because he is the highest profile celebrity grinder in the business. The Academy Award nominee is a mainstay of the WSOP and cash game action at the Commerce Casino, as well as featuring prominently on social media expressing his love for the game as well as interacting with the pros.

Whereas most celebrities who turn up at the Rio each year, vanish into thin air once their brief stint in the tournament is over, Woods can be found duelling with his fans in the cash game area at any time night or day.

Hendry has been prominent in celebrity poker circles since the early 2000s as was Steve Davis and Jimmy White (White won the Poker Million), but Hendry is the only one of the three to make a recent appearance when he turned up in London to compete in a high-profile event held in London.

Rick Salomon may be famous because of the woman he dated (Shannon Doherty), married (Pamela Anderson), and made sex tapes with (Paris Hilton), but he is also the celebrity who has won the most money playing live tournaments.

Salomon is a high stakes poker player who has made the final table in the $1m buy-in Big One for One Drop on two separate occasions. Salomon won $2.8m finishing fourth in 2014, and $3.3m for his third-place finish last year. He also ran deep in the 2006 WSOP Main Event finishing 196th and nearly made the final table of the Season 9 WPT World Championship at the Bellagio finishing ninth.

Jennifer Tilly is the one celebrity you can say with some confidence plays more poker than she does filming for the silver screen. She is also the only modern day celebrity to have a WSOP bracelet in her jewellery box courtesy of winning the Ladies Event in 2005.

Tilly, who is in a long-term relationship with Phil Laak has also won a WPT Ladies Night Invitational, a Bellagio Cup, and regularly competes in high stakes cash games.

The youngest male to ever win a Wimbledon title has exchanged the racket for the deck in recent years securing sponsorship deals with numerous online poker rooms.

Becker's CV includes deep runs in WPT and WPT events. In 2016, he finished 13th in the inaugural Devilfish Cup and with a fresh new contract in the bag you can expect him to be competing in poker tournaments all over the globe in the coming years.

Sheringham's most impressive display came in 2010 when out of 384 entrants he made the final table of the European Poker Tour (EPT) Main Event in Vilamoura. He finished fifth for €93,121 on a final table that contained EPT Champions Toby Lewis & Frederik Jensen, WSOP Main Event winner Martin Jacobson, and the biggest tournament winner in British history, Sam Trickett.

Sheringham is a born winner having scored 289 goals in 755 appearances for the likes of Nottingham Forest, Spurs and Man Utd., and 11 goals in 51 games for England. Sheringham also won three Premier League titles, the FA Cup and was a goal scorer in the 1998-99 Champions League Final that gave United the treble.

Sheringham can be found playing on the circuit in the London area including 888 events in Aspers Casino, Stratford.

When Basler is not busy in his capacity of Sports Director for FC Lokomotive Leipzig, you can find him three-betting the very best at the poker table at events like 888Live Barcelona.

The former Brazilian World Cup winner is also a busy poker player courtesy of his ambassadorial role with 888Poker.

Denilson scored 31 goals in 332 appearances for the likes of Sao Paolo, Real Betis, and Bordeaux. Denilson's move to Betis in 1998 made him the world's most expensive player at the time after signing for £21.5m.

He won the World Cup with Brazil in 2002, as well as winning the Copa America in 1997. You can find Denilson competing at 888Live events around the world including Barcelona and his home country of Brazil.