Chinese Poker is a unique game where players receive 13 cards instead of the traditional 2, as in Hold’em. Find out what else makes this card game special. 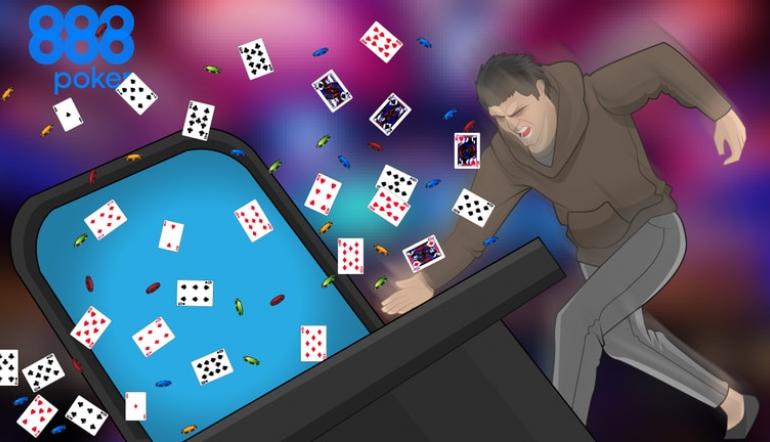 Chinese Poker is a unique poker variant that doesn’t much resemble the other, more common forms of poker (like Hold’em, Omaha, or Stud), in terms of gameplay. However, as long as you’re familiar with the same poker hand rankings that are traditionally used, then you should be able to do just fine at this exciting twist of a game!

In brief, after receiving their 13 poker starting cards (yes, 13!), players must divide these cards into three different poker hands: 2 hands containing 5 cards and one hand containing 3 cards. Players attempt to make the best/highest-ranked holdings (compared to how other players have arranged their holdings) for each hand.

This game is quite exciting and fun, even for more inexperienced players, because of the amount of luck involved, and also, how you are in complete control of how you choose to arrange your cards into the different hands.

Therefore  – to an extent – you’re able to determine your fate in this poker variant by figuring out the ideal order for how you should arrange your cards!

So, ultimately, you don’t need to be an experienced pro to do well in this game, but just ensure you know your poker hand rankings before you get going!

Because each player will be receiving 13 cards at the beginning of each round of gameplay, the maximum number is 4. This number is the most common format. However, gameplay between 2 or 3 people is entirely acceptable and permissible, too.

After players arrange their cards into different hand groups, players can either “surrender” (see definition below) or choose to play their hand. Then the remaining players reveal their holdings clockwise (starting to the left of the dealer), and then scoring commences. (More detail on how this works in the “Scoring” section later on.) 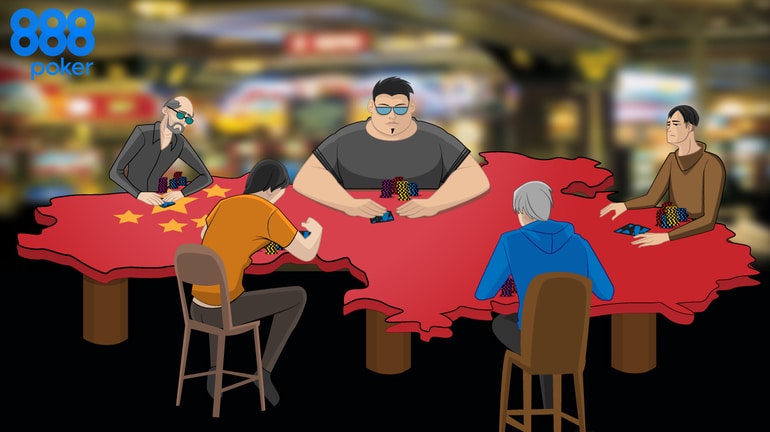 There are a few detailed notes on select rules and game options that should be addressed:

To help better illustrate the rules, let’s look at the following section regarding gameplay and how to play a hand of Chinese Poker.

How to Play Chinese Poker (Gameplay) 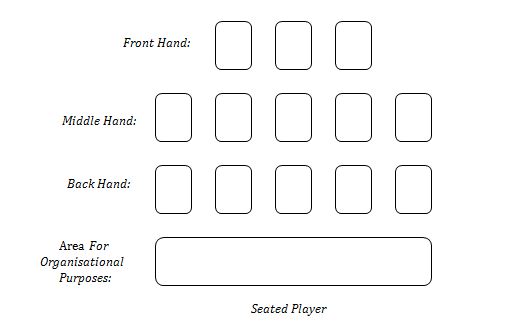 As mentioned, it’s crucial to know the standard poker hand rankings so that you can organize your hands appropriately from strongest to weakest.

Here’s a chart reminding you of the various hand rankings in poker, with examples of each:

To reiterate what was mentioned in the “Rule” section, it’s crucial to remember that if a player’s three hands are all straights or all flushes, then that player wins the entire hand by default!

Additionally, it should be noted in this section what the hand possibilities could be for the 3-card hand. Flushes and straights do not count, and they do not have enough cards to make too high-ranking hands.

Therefore, the 3-card hand can either make:

Unlike blind or ante structures for stakes in other poker games, Chinese Poker uses something call units, which are predetermined monetary amounts that players agree on using before the game starts.

Therefore, as no poker chips need to be used like in other poker games, scores can be kept track of with a simple pen and paper, allowing players not to have to pay up after each hand and just be able to settle up with each other after their session concludes. 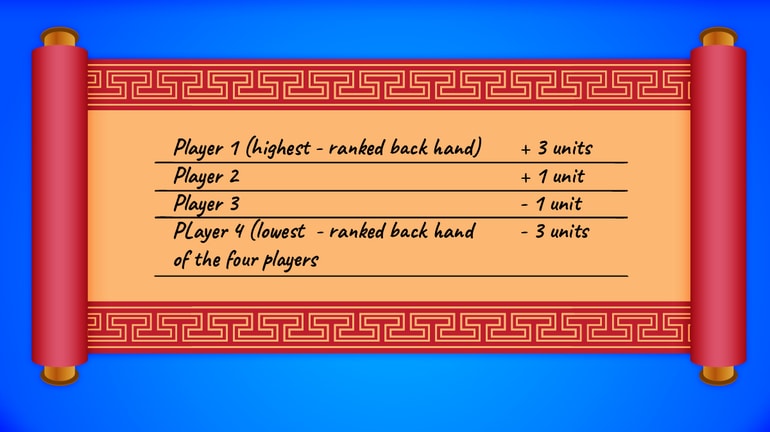 Regarding scoring and the winning/losing of units, every player collects one unit from each player whose hand they beat – and this process cycles through for the front, middle, and back hands, separately and respectively.

For example, suppose the following order for the *back* hand’s rankings. Beside each player is the number of units they will have either won or lost for this hand, followed by an explanation for how these numbers were arrived upon in the section below:

After this takes place for the back hand, the scoring process repeats separately for the middle and front hands, as well.

There can also be scoring for additional “bonus” units awarded (decided upon beforehand) if a player wins a varying combination of multiple hands (front, middle, or back) during the same round of gameplay:

There are two standard game methods, which award these “bonus” units. Be sure to decide and agree upon which you’d like to use (if any) before playing:

Especially with multiple players, the easiest way to keep score is to track everyone’s scores between each other player separately. Begin recording wins/losses starting with the player to the left of the dealer.

Compare his hands separately to each of the players to his left. Then continue with the player to the left of him. Compare hands to the remaining players who haven’t already been tallied, finishing with the last score being tracked between the dealer and the player 3 to his left (or immediate right), assuming there are 4 players.

A common ledger for one player’s score sheet might look something along the lines of this:

With score sheets organised and set up like this, players can keep track more easily of how they are doing throughout the game (seeing if they’re up or down), and also settle up individually and with more ease with each player afterwards.

You’ll notice in the 5th bullet point of the “Gameplay” section was the mention of royalties. These are bonuses awarded to players if they have particularly strong holdings.

While the exact number of units for each royalty can be altered and/or should be decided upon exactly before (use the charts below as a baseline to draw from), there are two types of royalties that may be awarded in the game of Chinese Poker:

In this section, the aim to elaborate on these different twists:

After this initial round, players each draw one more card at a time and then add it into one of their face-up hands on the table. This process continues until a player has received and played all 13 cards in their hand.

Even though they don’t know their ultimate 13 cards right away, players can still foul (or mis-set) if they misplace the correctly ranked order of their three hands by the end, forfeiting all bonuses/royalties they may be due. (This scenario is much more common in Open-Face than in Classic Chinese Poker.) It’s commonly accepted in Open-Face that if you foul, you must pay six units to each opponent who doesn’t also foul. Additionally, surrendering forfeits you two units to each opponent who doesn’t surrender. However, as per usual, these are units that can ultimately be altered/decided upon before gameplay.

Regarding scoring, it happens just like in regular Chinese Poker, with players winning one unit from their opponent(s) for each hand of theirs that they beat. The 1-6 method is generally used in Open-Face, meaning that only if you sweep and win all three hands, each player gives you an additional 3 units as an award.

Royalties are a bit different in Chinese Poker because one doesn’t know their entire hand from the get-go. Therefore, it’s a lot less likely that one of the royalties will be achieved (specifically the hand-ranking royalties), meaning the awards for these should be much higher than regular Chinese Poker.

The following chart is a recommended baseline to go by for unit amounts for royalties in Open-Faced. Again, the exact number of units can change, as per whatever players agree upon beforehand: 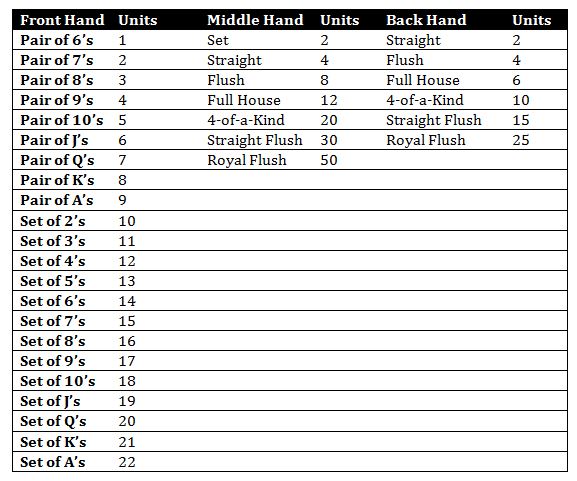 As royalties cannot be announced before completion of setting/placing a hand (as all the cards will not have yet been drawn), royalties are calculated and tallied during the scoring of each hand.

Fantasy Land: This addition to the game is an optional (but commonly used) in Open-Face whereby if players make a pair of Queens or better in their front hand without fouling, they enter Fantasy Land. Once here, they receive a massive advantage for the next hand, being dealt all 13 cards for their hand at once, exposing them to the table, only once setting is completed by other players. To stay in Fantasy Land for the next hand, players must then make any one of the following:

Because of how the drawing works with gameplay, there are only 5 turns total between players in this variant (speeding up gameplay). Also, only a maximum of 3 players total, that can play, because of the cards that will make up the discard pile. As per usual, Open-Faced Chinese Poker, Fantasy Land rules and requirements stay the same. However, in Pineapple’s Fantasy Land, players receive 14 cards and discard one of them face-down, in setting and arranging their ultimate hand. 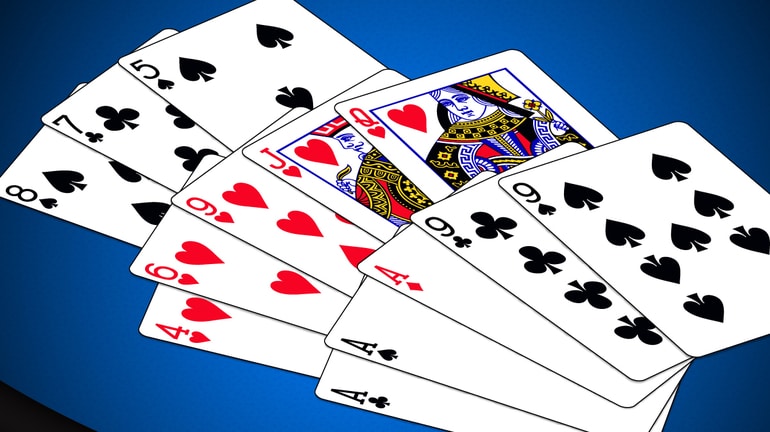 While certainly not as popular as Hold’em or Omaha, Chinese Poker still has its devoted fan base. It can be played on select sites online, typically seeing it played between 3-4 players.

As a practice tool, you can use a free website called Primedope, where you can be dealt 13 cards, arrange them yourself, and then be shown an analysis of optimal ways you may have chosen to organize your cards instead.

Checklist: Things to Decide Upon Before Playing

As you’ve likely noticed in this article, there are many variations and optional rules that can be used during the gameplay of Chinese Poker. The purpose of this section is to help consolidate down these key points into an easy-to-answer section that will help clarify all optional/variating rules before you begin, so there’s no ambiguity between players.

In closing, Chinese Poker is a fascinating game for poker lovers and thrill-seekers alike! Being able to collect royalties, get bonuses, beat your friends and have varied stakes in the same game between different players.

You can still win money for having the second-best hand in a round and being able to control your fate (to some extent) by how you choose to arrange your hands.

This game has a little bit of everything (and IS undoubtedly a LOT of fun) if you enjoy playing poker!

About the Author
By
Matthew Cluff