Poker Vs Chess: The Ultimate Showdown

It's a misconception that poker is merely gambling. In fact, poker is like chess, since both use similar skills. 888poker breaks down how the two compare. 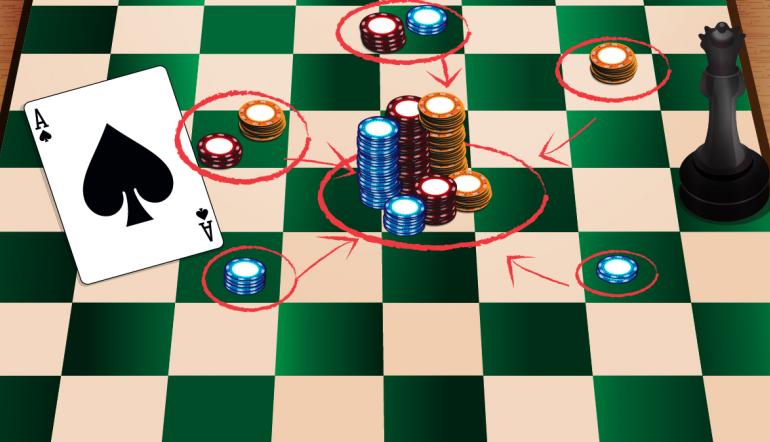 An essential similarity between the two games of poker and chess lies in their classification. Just like bridge and backgammon, both poker and chess are officially classified as 'sports' - 'mind sports' to be precise. In fact, poker was recognised as such by the IMSA at a congress held in Dubai in 2010.

This fact is excellent news for poker street cred' too, since it technically makes all pro poker players professional athletes... And to think my high-school gym teacher said I'd never make it – “In your face Mr Owen… Who's winning now!? Huh?! Huh?!”

Despite sharing a classification though, poker and chess have very different social perceptions. The financial risk inherent in playing poker makes it a form of gambling by definition. The negative connotations that come with this can deem it as somewhat taboo to some. However, with more regular people playing the game, it has become more of a hobby or pastime that can be enjoyed without negative reactions or reproach.

Chess, on the other hand, is seen as a highly esteemed mental challenge. Masters of chess are regarded as intellectuals and very well respected universally. To me, this hardly seems fair since both games appear to utilise many of the same skills.

In fact, I'd argue that the emotional stress and the infinite number of scenarios that comes with playing poker (in no limit games) mean that poker requires a broader range of skills, and, therefore, makes it at least as difficult a game to master.

Since chess masters tend to be considered 'geniuses', this might not be the case when comparing the most elite players in both games. (Although I'd argue that the emotional turbulence in poker makes it hard to compare the two games fairly anyway). But it's certainly not accurate to dismiss poker players as inferior or argue that the intelligence of the most elite players in both games is incomparable.

Many super intelligent people leave very respectable and high paid jobs to move into the world of poker. If you were to speak to anyone at the top of the game, the high level of social, mental and emotional intelligence of these poker players is evident.

Poker Has the Swag

Despite Magnus Carlsen's 'poster boy' status, most people still associate chess with cardigans and autism; with homemade sandwiches and virginity; with wonder-kids and nerds. Personally, I've not got enough experience in the chess world to know for sure, but I think most people that realise the intellectuality of poker, see it as a cooler form of chess.

Poker is to chess what rock and roll is to gospel singing. I can’t help but feel that if chess wanted advice on kissing a girl or some tips on riding a motorbike, poker would be the cooler older brother it spoke to. 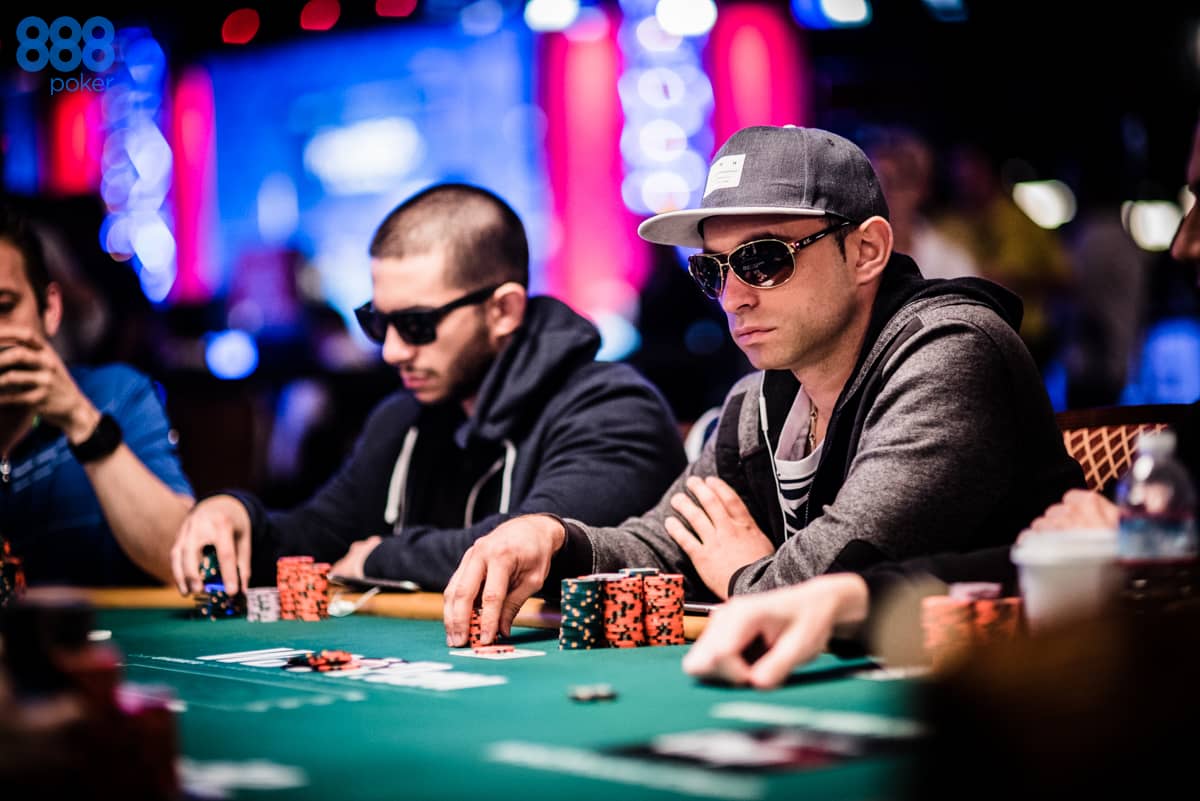 The Battle of Skill Vs Luck

Just like elite chess players, the best poker pros are all about maintaining solid strategies while finding ways to exploit their opponents'. Rock-paper-scissors is the classic explanatory example. If your foe is throwing paper too much, make sure you counter it by giving him a couple of fingers that little bit more often.... both as scissors and as a tilting gesture, if you want!

Unlike poker, skill in chess is absolute. Luck doesn't really come into it beyond being lucky enough to have your opponent make a couple of significant mistakes here and there. In a poker hand, the worst player in the world can battle the best and come out on top. In chess, with anything short of blackmail, this just isn't going to happen!

Luck is poker's biggest strength and its biggest flaw. Yes, to some, the impact of luck can tarnish poker's name with connotations of gambling and hinder its reputation. But it also adds the fun that not only encapsulates players and allows the average Joe to have a fighting chance against the best in the world. It's beautiful - and nowhere else in the sporting world does this happen.

In the long-term, both games are an outstanding test of wit and skill, but in the short term, the truth is that poker is just more fun than chess can ever be. Unless you can't handle downswings, in which case, play chess! 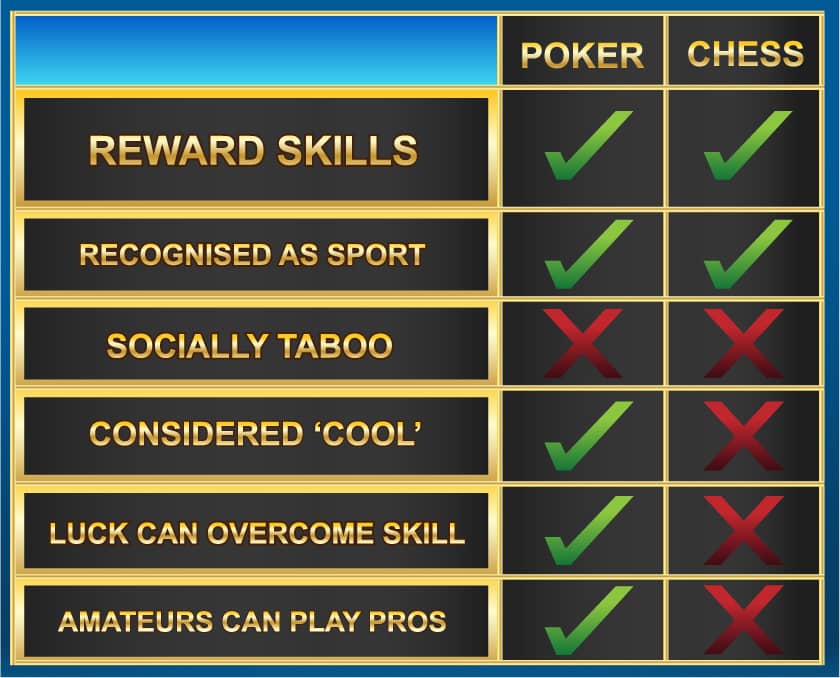 One of the most significant differences between poker and chess is that anyone can win a poker game in the short term. While skill will reign supreme over any kind of sample, anyone can get lucky in one key hand, pull off the dreaded 'hit and run' and technically win the match. The fact same isn't true of chess, where you'll have to battle to the death, since getting up and leaving is forfeiting the game.

I'd argue that this is one of the main reasons that poker is more popular than chess. Sure, the best players win more often in both sports, but cash game poker offers players the opportunity of a 'quick spin up' while MTTs allow rank amateurs to flirt with a chance to change their life.

This situation would never happen in a chess match where skill is just so key.

Generally, the transferability of a chess guru's exploitation and strategic flexibility mean that strong players are likely to have great success at the poker tables. However, the reverse (a transition from poker to chess) is not necessarily as rewarding.

Grinders that work on maintaining a rigid or GTO kind of poker strategy, for example, would struggle to approach chess in the same way. Chess is far more about out-manoeuvring, outwitting and out-exploiting your opponents than having a solid fundamental strategy.

As Claude E. Shannon explains in The Philosophical Magazine, Ser.7, Vol. 41, No. 314 (which you can find with a quick Google search), GTO chess does exist in theory. However, because nobody has any real clue as to what this is yet, the highly developed, strategic exploitation skills of top chess players would be far more beneficial in a poker game than the skills of top GTO poker experts over a chess board. Martin Staszko is the perfect example of a chess player that had great success in poker, finishing as runner-up in the 2011 WSOP Main Event.

This kind of strategic skill transition isn't limited to chess either, with players like Ike Haxton and Bertrand Grospellier all beginning their careers playing Magic The Gathering, another strategic card game.

Wherever you start, and whatever game you gravitate towards though, remember, both poker and chess reward study, dedication and skill in the long term:

Work hard, spend hours in the lab, and I promise you'll be rewarded...