A tell in poker is anything that gives away info on any opponent’s possible hole cards. Find out how to read your opponents while masking your tells. 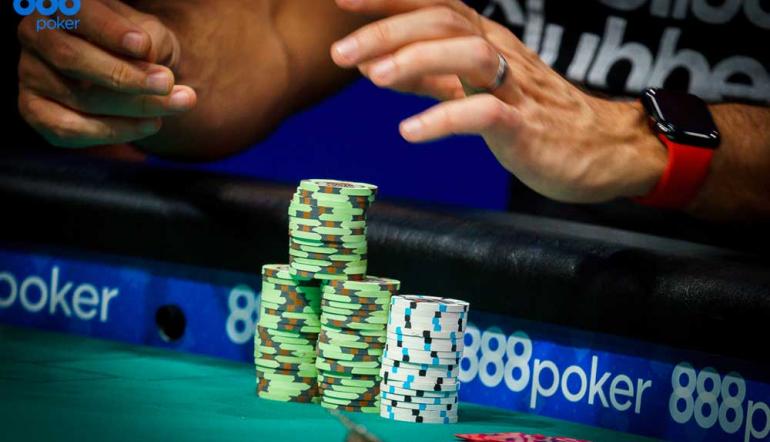 A tell in poker is anything that gives away information about our opponent’s possible hole cards.

This facet of poker is especially crucial in live games, where many players give away information through their body language.

In this guide to common poker tells, we’ll look at 10 specific poker tells that we can use in-game to get extra information about our opponents.

It’s essential to remember that tells mean different things for different players. We have created a list of common tells below. But the actual meaning of a tell could easily end up being the opposite depending on the opponent in question.

So how do we know what tells mean for individual opponents?

We first need to observe each player’s default profile.

What is a Default Profile?

The term ‘default profile’ describes how our opponent typically acts when not in a high-pressure situation.

The first step in picking up on tells is to try and get a feel for each player’s default profile.

These changes in the default profile allow us to pick up information regarding our opponent’s hand strength.

We won’t always know the meaning of a tell straight away. But we will eventually pick up on the implication as we continue to watch our opponent.

In online games, the type of opponent we face has a significant impact on the types of hands they will show.

Check out this guide to hand reading for more information.

We’ll focus on 10 specific tells that we might spot in our opponent’s game. The meaning of each tell is not guaranteed and simply provides one possible explanation for the listed tell.

This list is not exhaustive - there are literally hundreds of different possible tells. For a broader overview of where to look when searching for tells check out this writeup on body language in poker. 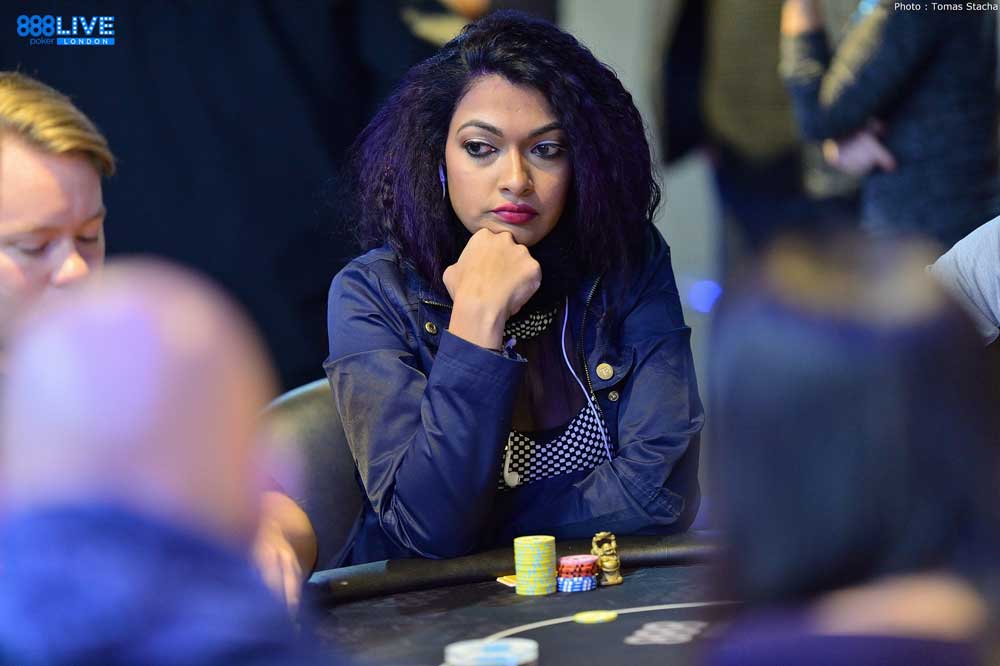 Let’s imagine we are heads up vs one opponent when the turn card is dealt. As soon as the turn card appears, our opponent immediately glances at our stack.

Why is he doing this?

The next obvious question he might ask himself is how much he needs to bet to win our whole stack by the river. From a less strategic point of view, he might simply be eyeing our stack to see how much he can potentially win now that he has turned the nuts.

This tell is especially interesting if the glance is very brief. It’s almost as if our opponent doesn’t want us to know that he is counting our chips.

In other situations, players might directly ask us ‘how much we are playing’ or even ask the dealer for a count. This play is less of an indicator of strength.

It’s almost as if our opponent wants us to know that he is eyeing our stack in an attempt to convince us he is stronger.

Sometimes our opponents slide their chips gracefully into the pot. Other times they force their chips forward aggressively.

According to many experts, aggressively placing chips into the pot is more a sign of weakness than strength. Poker is a game of deception at its core. So, if a player is attempting to telegraph strength, there is an above-average chance that they are indeed weak.

When a player is genuinely strong, they may prefer to slide their chips into the pot with a calmer, smoother motion. They are hoping not to draw attention to the fact that their hand is strong.

Of course, it all depends on the opponent.

It’s easily possible for the meaning of this tell to be the reverse. 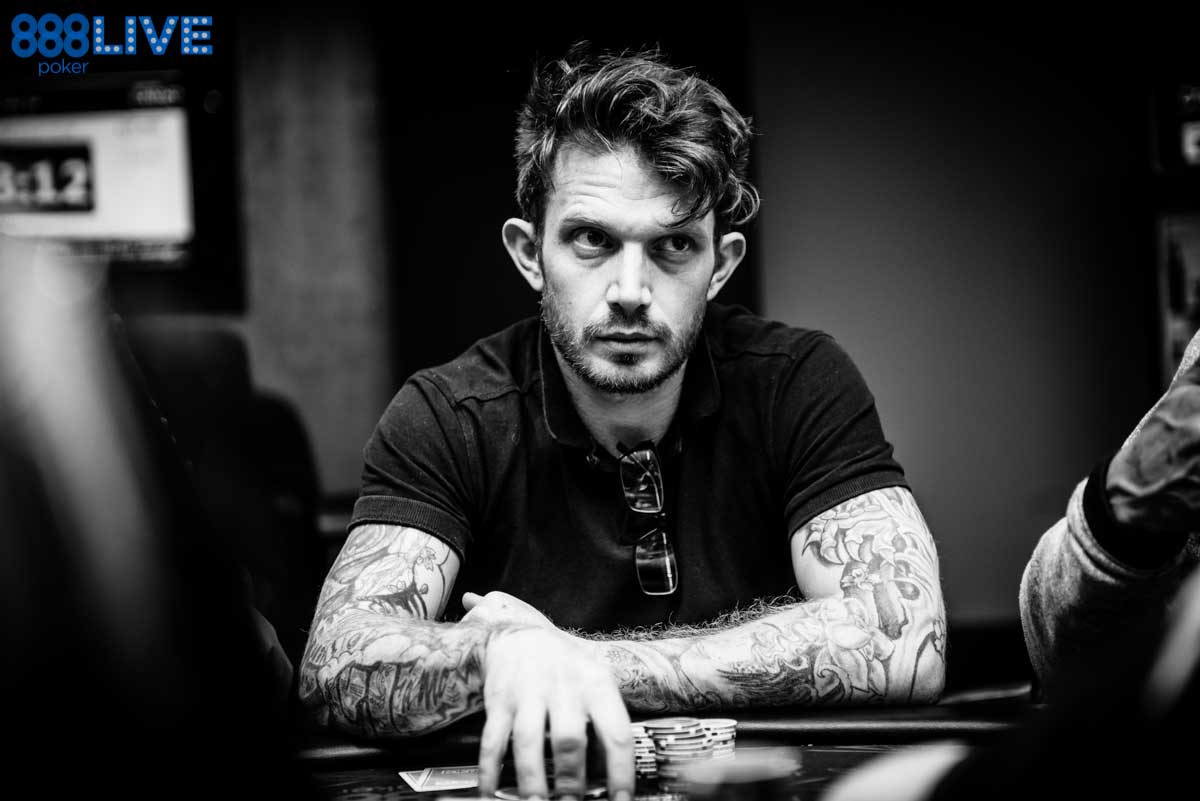 At an elementary level, prolonged eye contact with someone we don’t know well can be threatening.

Imagine our opponent has just made a large bet on the river and is now making strong eye contact while waiting for us to act.

A genuinely strong opponent won’t want to make us feel uncomfortable about making the call. They are far more likely to try and create a non-threatening environment by looking down or staring off into space.

It’s also simply harder for a player to take their eyes off the action when everything is on the line (e.g., in the case of a big bluff).

It’s easier to be relaxed about things when we hold the nuts and know that the outcome of the hand is going to be good either way.

Players with a super big hand are unlikely to be making small talk about the weather or some other topic. They are usually focused on playing their hand in the best possible way and maximizing its value.

On the flip side, if they continue to chat, we might find opportunities to pick up the pot with a well-timed bluff. Why not check 888poker’s complete guide to bluffing in poker? 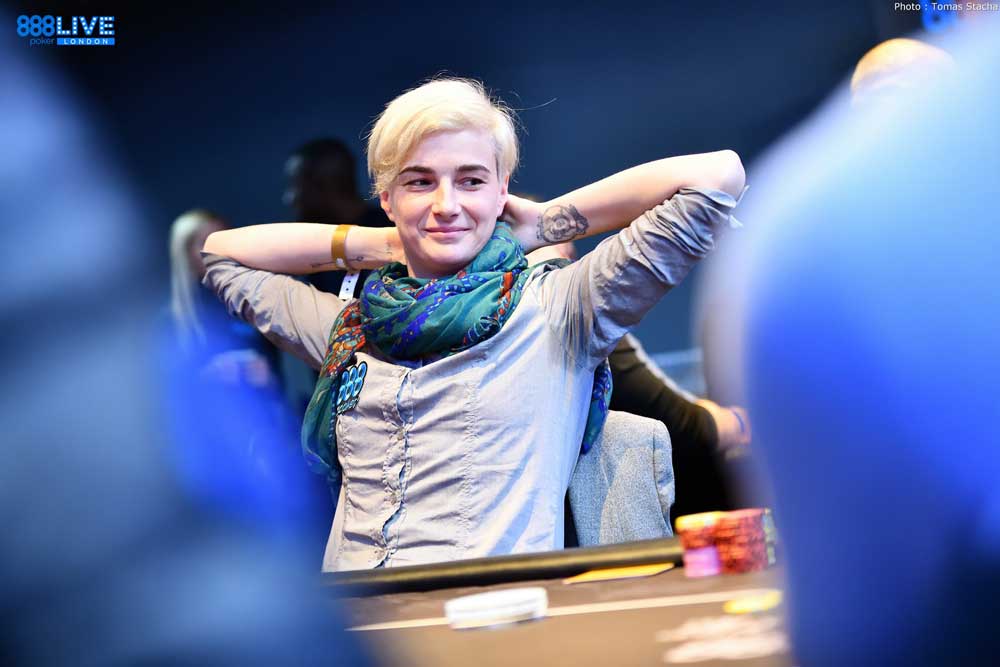 Next time we are at the poker table, we might take a moment to look at how the other players are sitting:

A sudden change in their demeanour and posture often indicates a shift in interest levels.

The classic example is a poker player leaning back, relaxed, seemingly disinterested in the action. Perhaps they are even ordering food or drinks from the bar.

Then, after being dealt particular hole cards, he suddenly sits up straight and seems absorbed in the action.

We might assume that it’s unlikely we will fold Villain off his holding with a small bet in such situations. On the other hand, if he had kept his relaxed, laid-back demeanour, we might assume that we can pick up the pot cheaply with a well-timed bluff.

But many players get into the habit of checking some types of holdings more often than others.

Imagine we are dealt black Aces preflop. It’s a relatively easy hand to remember. (No one forgets that they have Aces, right?) The chances of us needing to recheck our hole-cards postflop are low.

Now let’s imagine we are dealt one red and one black ace. The flop comes down all diamonds.

Do we have the flush draw?

Well, we know that we have one of the red Aces. But we might need to double-check our hole cards to see if we hold the A♦ or the A♥.

Say we get into more complex drawing hands such as the different types of straight draws and combo draws. Now, it becomes increasingly more likely we’ll need to recheck our hole-cards to confirm that we have connected with the board.

So, constant card rechecks from an opponent increases the likelihood that he has connected with the board in a complex way and is drawing. 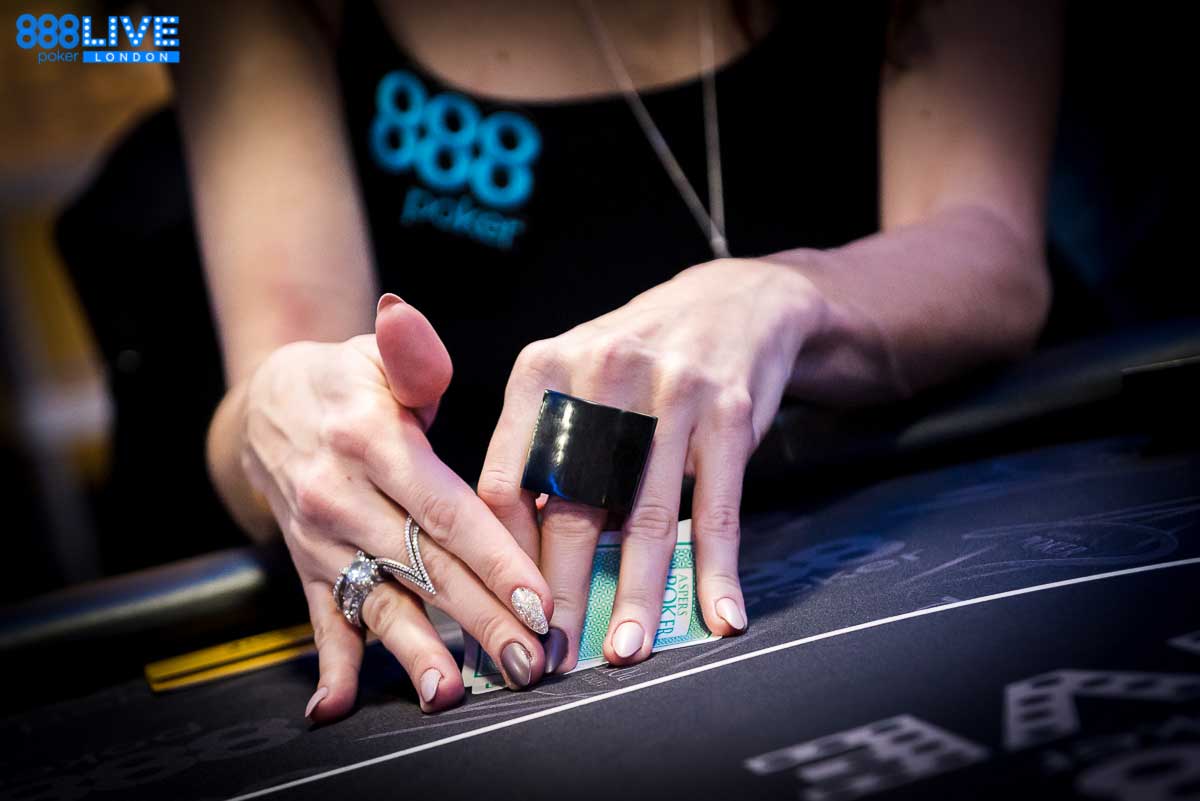 To further improve the quality of the previous read, many poker players focus on something called their opponent’s card apex.

It would be hard to pick up any tells if a player always had a card apex of precisely the same length. But many players have different card apexes for different types of holding, allowing us to pick up small pieces of information.

Similar things occur postflop. Say our opponent has connected with the board in a complex way (combo-draw, for example). So, he will likely take a bit longer looking at his hole cards before moving on.

Players often wonder whether tells only apply to live play or whether it’s possible to spot tells in an online environment.

Tells are a much more significant part of live play. But tells still exist in online poker.

Let’s review some online tells to complete our list.

Experienced online poker players generally make use of a feature known as auto-rebuy for cash games.

Weaker players are often hesitant to use this feature or might not realise it exists. Perhaps the reason that they could easily lose track of how much they were down with auto-rebuy enabled.

When we sit down at an online table, and a player has less than 100bb in their stack, we can assume they do not have auto-rebuy enabled.

This useful tell allows us to find online tables that are likely filled with weaker players. (Even though we may have never played against the players at the table before.) 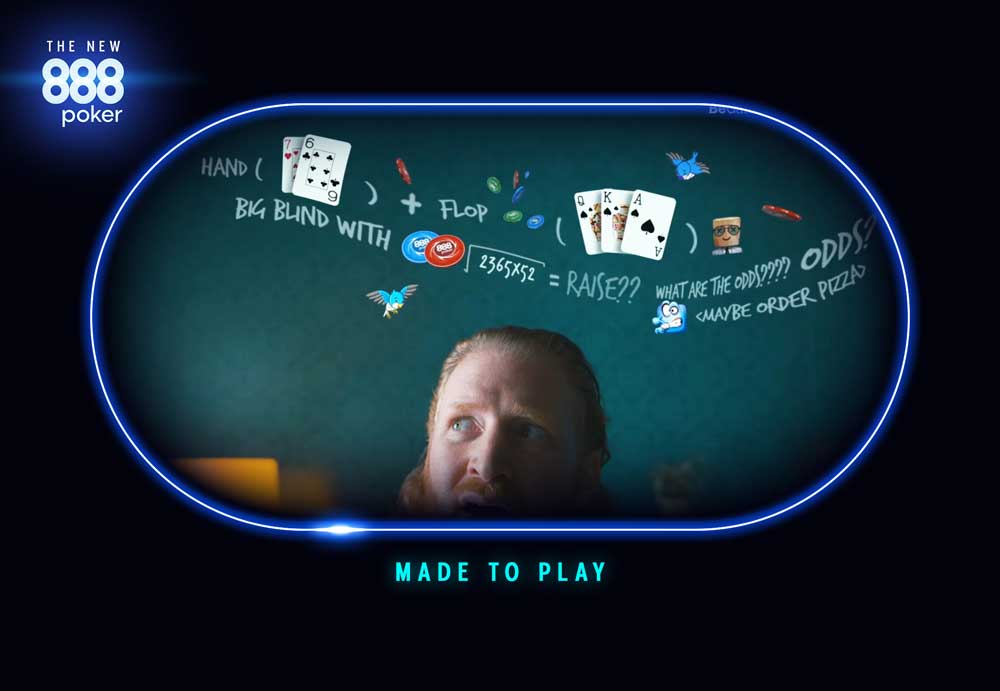 Let’s take a simple example that anyone can spot regardless of experience. Generally, advanced Hold’em players don’t generally open-limp preflop (apart from in the small blind, which is completing).

The same is true for postflop bet-sizings, although this takes more experience depending on the scenario. As a quick example, advanced Hold’em players usually cbet between 25% and 33% pot in 4bet pots.

Say a player at our table is consistently betting half pot on the flop in 4bet pots. This tell indicates that they lack experience.

We first need to know the standard sizing in a specific situation before recognising that our opponent is deviating from it.

While table banter might be a big part of live poker, it often doesn’t feature in many online games. This situation occurs despite the fact that online poker tables often have chatboxes. These also have social features such as emojis and throwables.

Average regulars would often prefer to add an extra table or focus more intently on the action than spend their time socialising.

As a result, if a player is typing away in the chatbox, it significantly decreases the likelihood that they are strong winning players.

So, chatbox action is therefore a good thing. It indicates that the opposition is likely soft and that the players are there to have fun rather than to make money.

What is a reverse tell in poker?

How do I know if I am giving off tells?

What if my opponent doesn’t have any tells?

Are there tells in online poker?

For this reason, tells are generally not the most crucial thing in a given situation.

Good players often look to make use of tells in situations that are already close. They’ll use tells as a type of tie-breaker.

Say there's a situation that is theoretically a clear fold or call.

It’s unlikely that an advanced player will change their decision purely based on a possible tell.