Find out the secrets to HORSE poker - a collection of poker games that is regarded as one of the top formats that separates the amateurs from the pros. 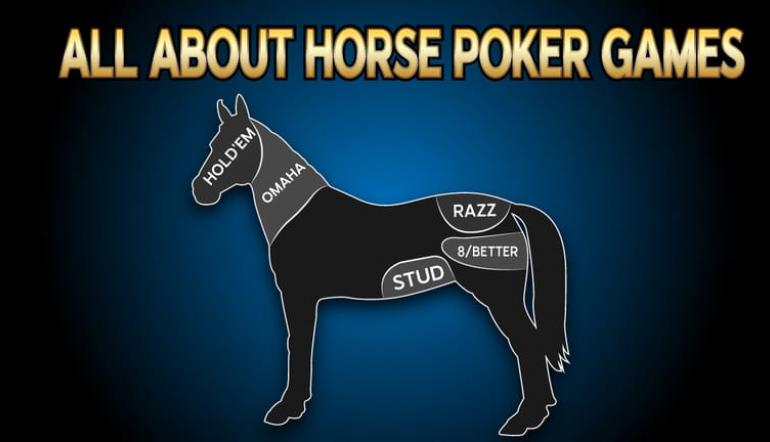 HORSE poker is not such much a poker variant in itself, but rather a collection of poker variants which are played back-to-back at the same table.

HORSE is an acronym which stands for the following -

All poker variants in HORSE are traditionally played with a fixed-limit betting structure, and the game is switched after each complete orbit at the table.

For a full breakdown of each variant, it’s recommended to check out the respective full rules page here at 888poker.

Here is a quick overview of each variant to get us started.

Hold’em is the world’s most popular poker format. Players are each dealt two cards and use them in conjunction with community cards to create a 5-card hand.

Players may use both, one, or zero hole cards when constructing their hand.

Omaha is the second most popular format in the modern era. Players are each dealt four cards and use them in conjunction with community cards to create a 5-card hand.

Players must use precisely two of their hole cards when constructing their hand.

Razz is the lowball version of Seven Card Stud. Players are dealt a combination of upcard and downcards (4 upcards, 3-downcards to be exact). Upcards are visible to the entire table while downcards are hidden (like holecards in Hold’em).

Players start with 3 cards and are dealt an additional card on each betting round.

Lowball format means the lowest hand wins. The nuts in Razz is A,2,3,4,5 and is referred to as the “nut low”. Note that straights and flushes don’t count against our hand as they do in other lowball formats such as 2-7 Triple Draw.

Stud variants do not make use of the standard blinds/button setup. Instead, stud variants employ a combination of antes and forced bets known as bring-ins in the first betting round.

The layout of each player’s hand in Stud variants as follows.

In the first betting round, (known as Third Street), players are dealt two downcards and one upcard.

Low hands must be eight-high or better to qualify (hence the E in HORSE, eight or better). If there is no qualifying low hand, then the entire pot is awarded to the best high hand.

Good split-pot players know that the objective should be to try and win both pots simultaneously(referred to as scooping) rather than zoning in on either the high or the low pot.

Why Is HORSE Rated So Highly?

Many players choose to specialise in one specific poker variant, so they’ll, naturally, come out on top when playing against a non-specialised player in that format.

HORSE is considered by some to be an excellent test of a player’s all-around poker ability since it forces players to compete in ALL formats – even those that are not specialised.

Some also like the fact that HORSE breaks up the monotony of playing a single game. The new format each orbit keeps the game alive and exciting.

If we are looking for a poker challenge that tests our knowledge of different formats, HORSE may well be a great choice. HORSE tournaments run regularly at the World Series of Poker, so for some, it’s an opportunity to pick up a bracelet in a softer field.

All the games in HORSE are traditionally fixed limit, meaning the variance will be on the lower side. Fixed limit games are less prevalent in the modern era; however, so players coming from a no-limit or pot-limit background may not enjoy the action as much.

Of course, the betting structures can easily be tweaked.

Stud is still most commonly played in fixed limit format (even in the modern era) while Hold’em is most widely played with no-limit structure and Omaha with pot-limit.

Comparison of Games in HORSE