Everything You Need to Know About Premium Poker Hands

In No-Limit Hold’em, there are 169 distinct starting hands. In this article, you will learn which ones are premium and how to play them to max-value. 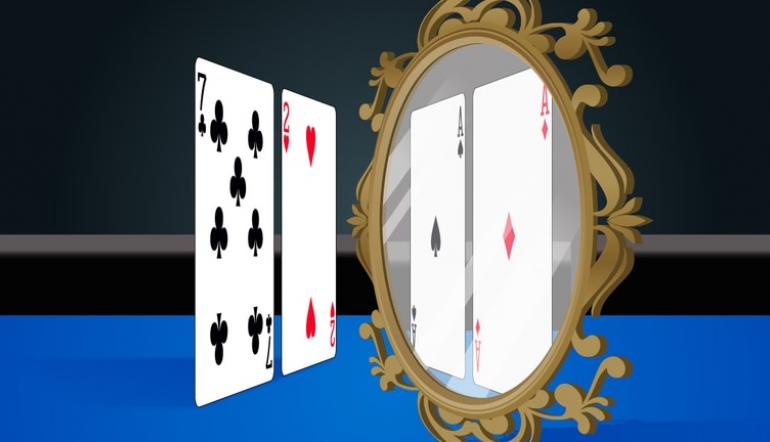 When someone talks about premium hands in poker, they’re referring to the strongest preflop hands - the best-of-the-best, if you will. In No-Limit Hold’em,there are 169 distinct starting hands. They include 13 different pocket pairs ranging from deuces up to aces, plus 78 suited hands and 78 unsuited hands.

There are 1,326 different combinations, but that’s breaking each “suited hand” down into a distinct hand, based on the four suits. So, for simplicity’s sake and to avoid redundancy, suited hands like 9♦8♦ and 9♠8♠ have the same value preflop, as do non-suited hands like Q♣J♦ and Q♥J♠. For each different pocket pair, there are six different combos, each with an equal value.

On the spectrum of starting hands, pocket aces rank at the top while at the other end is 2x7x off-suit. Obviously the bigger the pair, the better, while big aces also work their way into the top hands. 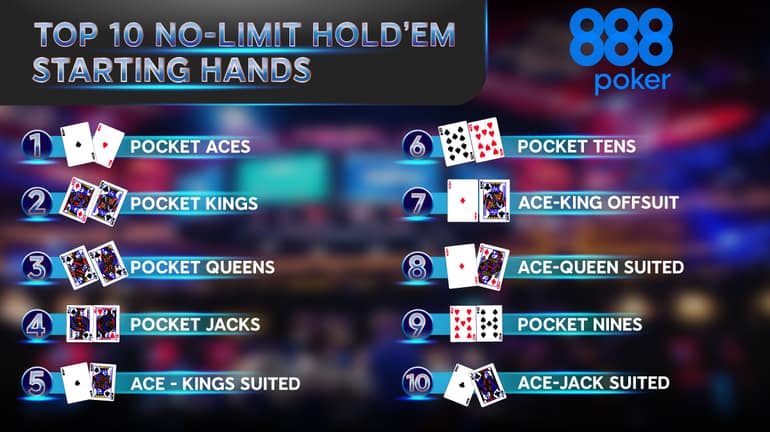 While 169 starting hands is much easier for the human mind to comprehend than 1,326 different ones, it’s still a lot to remember. To make things easier, poker players save time by labelling hands weak, average, and premium (or with similar adjectives).

What Are Premium Poker Starting Hands?

Some players value particular hands more than others based on their playing style. But, for the most part, everyone agrees the top 10 percent of starting hands qualify as premium holdings. Mathematically, the 22 possible combinations that fall into that category are 77+, QT+ and KQo+ (pocket pair of sevens or better, big aces, and paint cards). The worst suited ace you should play is Ax9x suited, while the worst off-suit ace would be AxJx.

While other pocket pairs are considered quality hands, they’re not exactly premium as they ultimately gave less equity. 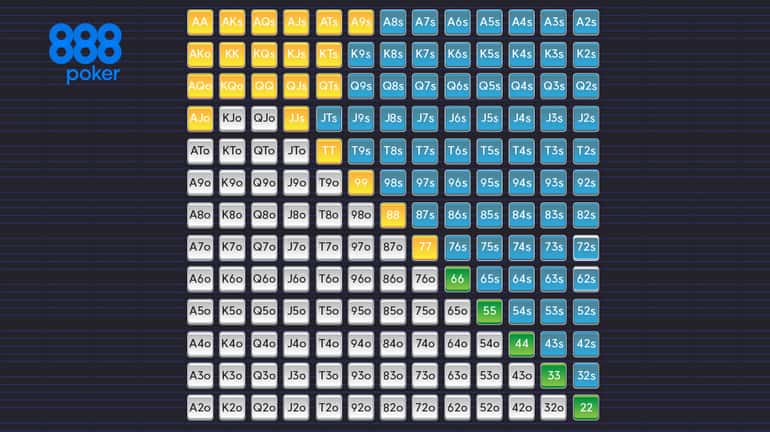 How premium a hand is calculated also depends on other factors such as position, stack sizes, number of players in the game, etc. For example, you might not want to open with QxTx from early position but probably should from the button.

A genuine premium poker hand might be one that you open from any position – pocket tens or better and big suited aces like A♠K♠ or A♥Q♥. Such hands have an expectation of profitability over the long term and can stand aggression from three-bets.

Of course, it’s not easy to get dealt a premium starting hand. The odds of getting pocket aces is 220-1 while getting AxKx suited or unsuited is 81.9:1 To get a pair of pocket tens or higher is 43.2-1, while suited cards including a jack and better are 54.3-1. 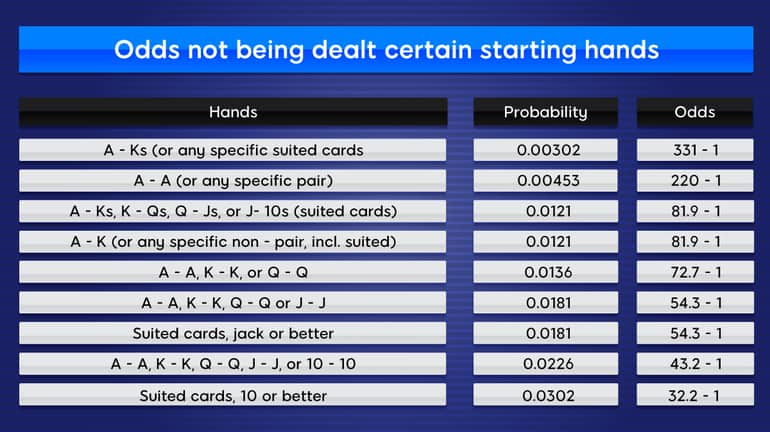 One of the best ways for poker players to improve their game is to focus on playing only premium hands and ditching the junk. For a newcomer, some sage advice might be to play only pocket pairs, big aces, and paint (face) cards. If you narrow your range – AKA the combination of starting hands you’re willing to play – you’ll develop a tight, solid image. That play usually results in your opponent’s giving you respect.

Hand selection is one of the first building blocks when constructing your foundation as a poker player. That said, you also need to adjust accordingly when your premium hand might not be so premium after the flop.

For instance, imagine you raise preflop with the A♦K♦ and receive two callers. It’s a premium hand at that point but shrinks considerably when the flop falls something like 8♠9♠10♣. At that point, it’d behove a player to slow down with the knowledge that a once-premium hand suddenly became a dud.

Along those lines, it’s worth knowing flop odds to gauge how often your hands will improve. For example, if you hold a pocket pair, do you know how often you’ll flop a set?

There’s a lot of maths involved in calculating flop odds, but we’ll save you some time by offering you some numbers:

If you restrict your starting hand selection to premium hands, you will inevitably experience a bad beat. Even if you get it in preflop holding aces against kings, your opponent has a 20 percent chance of winning the hand. Interestingly, a hand like 8♠7♠ has a better chance of beating aces (around 24 percent) than any other hand.

When other players also employ a premium hand strategy, it often becomes a waiting game for two big hands to run into one another, especially deep in tournaments. That’s why you see either a lot of flips (i.e. big slick versus pocket queens), coolers (running kings into aces), or bad beats (queens getting cracked by jacks all-in preflop).

Of course, it can take a while for one or more players to wake up with premium hands, and it can get quite boring. That’s why some players open their range and play less-than-premium hands, which is often the right strategy.

If you notice your opponents are playing tight waiting for premium hands, you should raise more liberally to steal pots. After all, you know from what you’ve read above that being dealt a premium hand doesn’t often happen (or at least as often as we’d like).