What is Pair in Poker?

A pair is a poker hand where we have two cards of identical rank. In most poker variants this leaves room for three kickers, since poker hands are usually constructed with exactly 5 cards. The higher the rank of a pair, the higher it’s value. Aces are high in this context, so a pair of Aces is the best possible pair and will beat all other pairs. If two players make the same pair, the kickers are consulted to determine the winner (highest kicker wins). 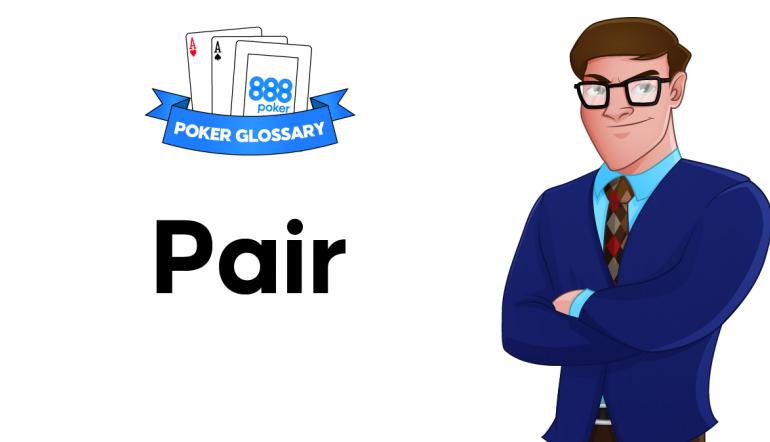 We make a pair when exactly two of the cards within our hand are of identical rank.

For example, in Hold’em,

Hand 3 also makes a pair but utilizing hole-cards only since it’s a pocket pair. Hand 3 beats both hand 1 and hand 2 since it’s a higher pair.

This example illustrates the importance of remembering that Hold’em hands always consist of 5 cards. At first glance it might seem hand 2 is better due to the higher side card, but these hands actually chop. Both hands make a pair of Aces with Ten, Nine and Eight as side cards.

Since there is a pair already on board, both hand 1 and hand 2 technically make two-pair, Aces and Deuces. Since one pair is already on the board and part of both players hand, both hands are often colloquially referred to as “one-pair” (even though they are in fact two-pair). In the above example hand 2 wins since it has the better kicker.

How to Use Pair as Part of Your Poker Strategy

While one-pair holdings can often win at showdown in variants such as No Limit Hold’em, they are not especially strong holdings and typically want to be wary regarding playing large pots. By the time our opponent is willing to put 100bb into the middle (in a 100bb cash game for example), it’s somewhat rare (although not impossible) that our pair will be getting the best of it.

Careful attention needs to paid to our kicker especially when holding some of the higher pairs. Aces are the most likely pair to get outkicked simply because i) more players are looking to play Aces preflop and ii) because Ace-high board textures are the most common. Baby aces (i.e A2-A5) can be especially problematic for novice players due to the tendency to overplay top-pair.

The relative hand-strength of one-pair holdings will change heavily based on the board texture. Pairs typically do best on drier textures, while their value drops dramatically on textures where a decent number of straights and flushes are possible.

In four card variants such as Pot Limit Omaha, it is significantly easier to make pairs and hence they are worth a lot less than in Hold’em.