Many poker players have worked to expand their brands and media reach through YouTube and Twitch poker vlogs. 888poker counts down the Top 7 Vloggers. 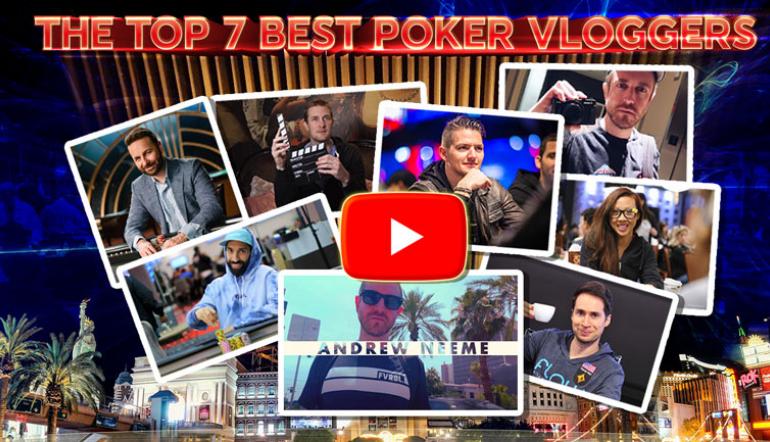 There are more ways to watch, read, follow, and get educated about the game than ever before.

Beyond that, many poker players have been expanding their brands and media reach through YouTube and Twitch poker vlogs. The term “vlog” is a mashup of the words “video” and “blog”.

More and more, players are building audiences by filming themselves playing poker.

Many of these vloggers go beyond simply showcasing their play on the live felt or online.

There’s a real opportunity to make money on sites like YouTube and Twitch. So, a few poker players are finding vlogs as an excellent way to share their poker life and make some cash on the side.

That includes sponsorship, promotional opportunities, and even merchandise sales.

This article offers a look at some who stand out from the crowd.

Picking the best comes with plenty of debate. But these are some great poker vloggers.

Neeme is one of the most popular poker players in the “vlogosphere” and even won Vlogger of the Year at the 2018 and 2019 Global Poker Awards.

With more than 166,000 subscribers on YouTube, fans love his honesty and insight into the game.

Born and raised in Michigan, Neeme worked in the business world before getting into online poker. He later transitioned to the game full time and moved to Las Vegas to play more. His vlog focuses on his life as a cash game player in Vegas and Los Angeles.

In September 2021, Neeme headed back to Hustler Casino in L.A., where he first began playing cards. He recorded the action from one of the casinos where he got his start.

Here’s a look at Neeme heading back to the Hustler, where the poker pro shows that his skills have certainly improved.

He still seems to be having plenty of fun along the way.

Daniel Negreanu is no stranger to the spotlight. The six-time World Series of Poker bracelet winner has become a multimedia sensation over the last few years. Along with streaming his online poker action, “Kid Poker” also appears on several podcasts. Alongside that, he mixes in some commentating duties on tours like the Triton series.

His vlogs during the WSOP and WSOP Europe have become especially popular. Negreanu gives a behind-the-scenes view of his action each day with commentary about his play and daily life.

Viewers who can’t make it to Las Vegas get an honest daily look at the series grind.

Each episode comes with slick production quality. Negreanu seems to have an entire team helping with his version of a daily poker reality show.

This poker player is originally from the San Francisco area. Owen now lives in Las Vegas and has been vlogging since 2016. Primarily a cash game player, Owen’s vlog focuses on his regular casino excursions.

His videos chronicle his poker sessions and adventures. The vlogger also includes explanations of particular decisions at the tables.

He first began playing poker as a youngster in 2003 when his father purchased a casino computer game. In 2012, Owen headed to Vegas with $10,000 to play cash games for a living. The next few years saw him go back and forth between playing full time and working as an accountant.

Vlogging is now a significant part of his poker life, and viewers love following his action as well. The insight he offers to help players work on their own games.

Owen now has more than 492,000 subscribers. In one of his videos, Owen hit the Bellagio for some cash game action in September 2021.

He bagged the biggest win of his career.

This popular player from Chicago (also known as “Chicago Joey”) has become a media tour de force over the last several years.

Joey’s podcast/vlog/YouTube channel has a bit of everything. Ingram also lends his voice on occasion for poker commentating duties.

He also streams some of the biggest online high-stakes events, offering his unique commentary about the action. With a big personality and humorous takes on the world of poker, Ingram has attracted a legion of fans.

He spent considerable work breaking down the Mike Postle live poker cheating scandal. And, in 2020, Ingram received the honour of Journalist of the Year at the Global Poker Awards.

He also earned an award for Media Content of the Year/Video.

Here’s a video of Ingram interviewing one of the biggest names in poker, Phil Ivey.

This widely-recognised vlogger has been playing poker cash games for a living since 2008. Moreno bounces between casinos in Las Vegas and San Diego.

He describes his channel in the following way  –

“Embracing the Grind, and the lessons that come with it.”

Viewers love his action, and his YouTube channel now has more than 50,000 subscribers. Johnnie Vibes brings plenty of fun and humour to his vlog and isn’t afraid to show massive bluffs.

Vibes seems to have built a community of players and often hosts “meetup” games for those who enjoy his vlog. These events feature plenty of smiles, with fans getting in on the vlogging action.

His videos focus on the fun of the game. This one showcases a fascinating hand with a mom of four at the table.

Long-time poker pro, Jeff Gross, has parlayed his love of poker and affable personality into a complete multimedia experience. While his platform may not be the traditional vlog,

Gross offers a varied approach to his brand.

Gross has been playing for years and has $3.4 million in live tournament winnings and much more online. Among his channels, he has 45,000 subscribers on YouTube and 84,000 on Twitch.

His Poker Flow Show streams daily with his online play. He also entertains viewers with family stories and other poker tales. Beyond all that, Gross interviews well-known poker names, such as Phil Hellmuth.

“It’s entertainment, it’s fun,” he told WPT.com about his platform. “It’s a live stream, and I present content, everything you can imagine poker – start to finish – poker and family. It shows you the life of a poker player.”

Kirsty’s vlogging has been dialled back a bit recently (possibly due to having her first child).

She comes from a background in the poker media, where she interviewed some prominent names in the game on camera.

Arnett began vlogging a few years ago after leaving behind her regular job. She attempted to make a living at the poker table. Her platform also features some excellent poker coverage as life takes Arnett around the U.S. and beyond.

She takes viewers on an emotional ride with the highs and lows of playing poker for a living. That journey included a runner-up finish at a WSOP Circuit event in Aruba.

Arnett also documents life as a husband and wife poker team. Her husband Andrew Moreno won the Wynn Millions in 2021 for $1.5 million.

He plays a role in the vlog as well.

After the big win, Arnett and Moreno spoke about their life changes. She was writing a book and pregnant with their first child.

This vlogger remains busy and has plenty in the pipeline.

How will @Amo4sho & @KristyArnett's lives change after Andrew's massive $1.4million win? Hosts @JamieKerstetter & @BenWilinofsky find out on today's episode of The Rake!

For our web story about poker vloggers, just click here.