888poker LIVE Barcelona wrapped up yesterday, 23 May, with the final table of the Main Event. It was massive success, with huge sums awarded during the series. 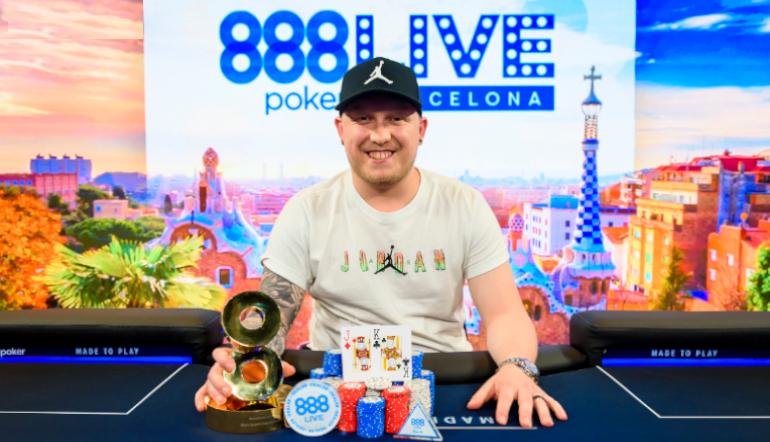 888poker LIVE Barcelona wrapped up yesterday, 23 May, with the final table of the Main Event. It was massive success, with huge sums awarded during the series. The warm weather heated up the action at the poker tables and created a relaxed and fun atmosphere for all those attending.

As we celebrate 888poker’s 20th anniversary, poker pro celebrities Maria Ho and Dan “Jungleman” Cates joined in the festivities. Team888 ambassadors and the 888poker StreamTeam also made the trip to the cosmopolitan capital of Catalonia!

And after 12-days of intense poker action, we are well and truly ready for even more live poker in the upcoming months! One of the most significant announcements at the event was the signing of Geordie poker professional Ian Simpson.

As an accomplished player and Twitch streamer, we welcome him as the latest 888poker ambassador to our roster!

The Casino Barcelona doors to the event officially opened on 11 May with Opening and Main Event satellites along with other side tournaments.

Here’s a breakdown of some of the early winners: The Super High Roller was more of a single-table tournament but did not lack any star poker. The tourney was undoubtedly entertaining, with Dan Cates and Maria Ho going deep metaphysically and card-wise.

But it was Jungleman who won the day, taking down fellow pro Maria Ho along the way and banking €33,000 for his efforts. 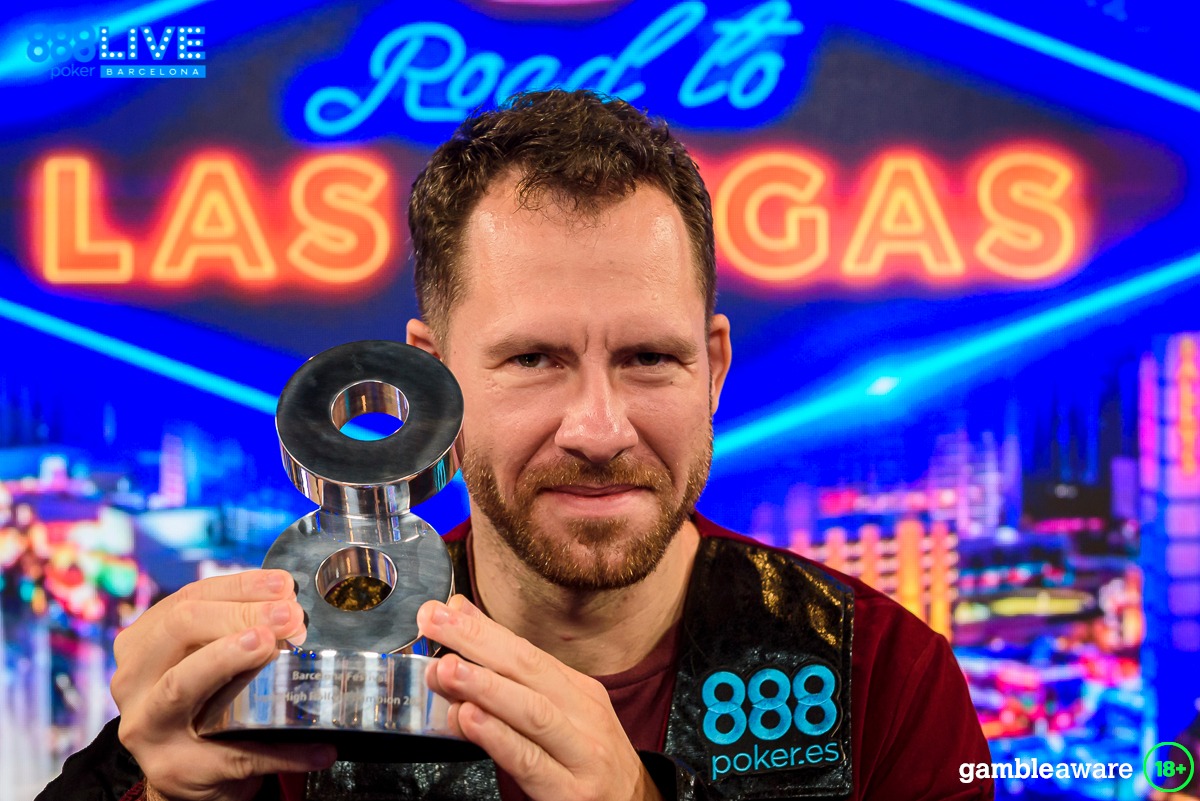 The Ball Keeps on Rolling in the High Roller

The High Roller event attracted a sizeable field of 63 runners with its more affordable €2,200 buy-in. After two days of battling, it came down to James Crawley, hailing from Cambridge, Ireland and Brit, Warren Aspey.

Well, James indeed smashed that with his win, bagging the trophy and top cash for Play with Friends SNG Gives Back

The Play With Friends Charity event was a nine-handed sit ‘n go with 888poker ambassadors and StreamTeam members playing for a slice of a $10,000 pie.

All nine players fought hard for their charities and very worthy causes. He raised $5,000 to donate to his special charity Myeloma UK.

The Party Gets Started with the Main Event

The jewel-in-the-crown of the festival was the Main Event with a €1,100 buy-in. The four flights in the tournament gave players multiple opportunities to make Day 2.

Players could also buy in on Day 2 up until the first two levels. 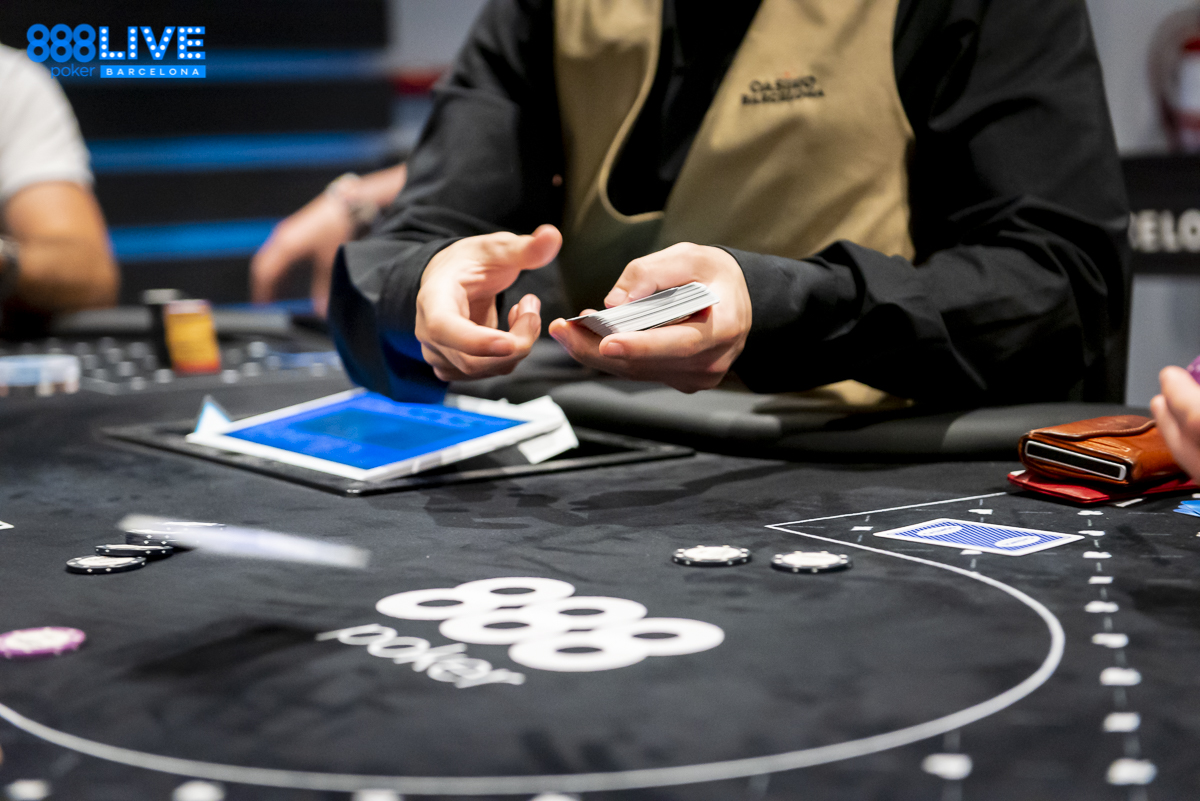 Fashionably late to the party was Team888’s Chris Eubank Jr., who played Day 1C of the event.

Day 1A of the 888poker LIVE Main Event kicked off 19 May as the first of four starting days. The €1,100 buy-in event attracted 94 entries, with 39 players bagging and tagging their way to Day 2.

Among the players were several of our 888poker ambassadors, but it was a local Catalan player who eventually came out on top,

Alex Baena I Carrasco dominated with a big stack and bagged up 213,300. Melika Razavi took advantage of the re-entry option and eventually secured a very healthy stack of 176,500 going into Day 2. 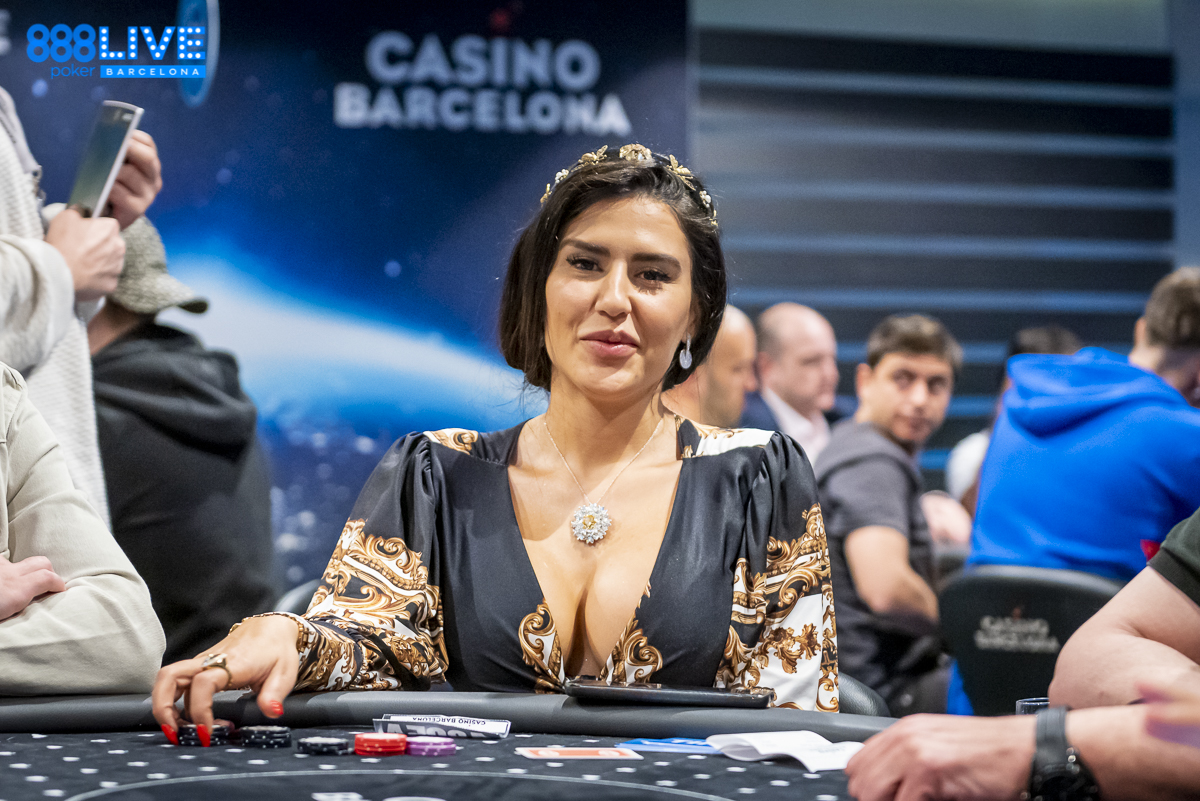 Other notable baggers and taggers on Day 1A were the following:

Unfortunately, Maria Ho’s spell in the €1,100 Main Event was short-lived after losing a coin flip to Abernathy. She lost the remaining chips shortly after but promised to be back for the following starting day. The second of the four starting flights in the 2022 888poker LIVE Barcelona €1,100 Main Event drew a slightly smaller field than Day 1A.

With Day 1B concluded, we crowned a new overall chip leader - Gabriel Podovei, who racked up a massive stack in the final stages. The tournament attracted an additional 72 entries on Day 1B, of which 24 players bagged and tagged for Day 2. 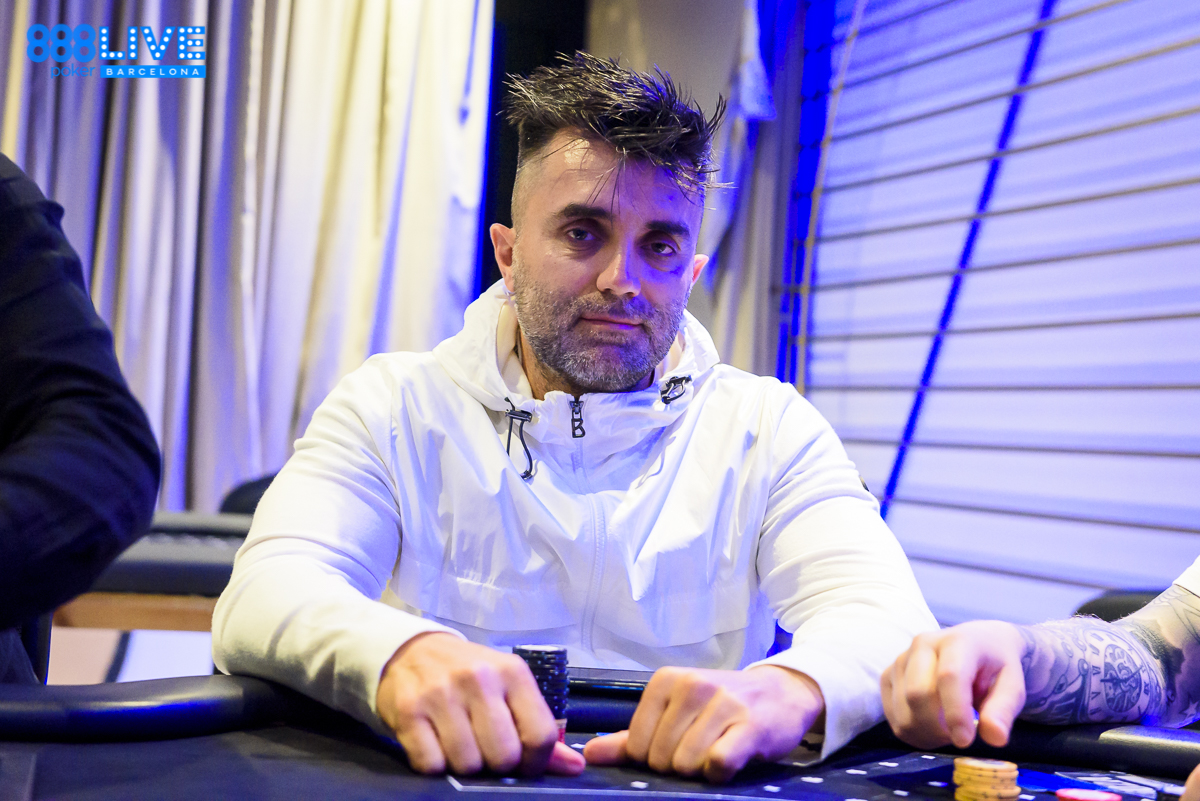 The third starting day of the 2022 888poker LIVE Barcelona €1,100 Main Event drew the most players. A whopping 110 entries emerged to boost the overall field to 276 entries in total.

More than half of the runners were out of the race and way off the money within ten levels. Only 48 players bagged chips, with Alejandro De Lucio Sanchez topping the leaderboard with a stack of 199,100.

888poker ambassador Chris Eubank Jr (114,300) broke through the Spanish-dominated top ten to make it through, giving him a fighting chance on Day 2. Here are the final number of players who survived to play Day 2:

The prize pool stood at a respectable €320,640, but there was a long day of live poker action before anyone could claim a slice. 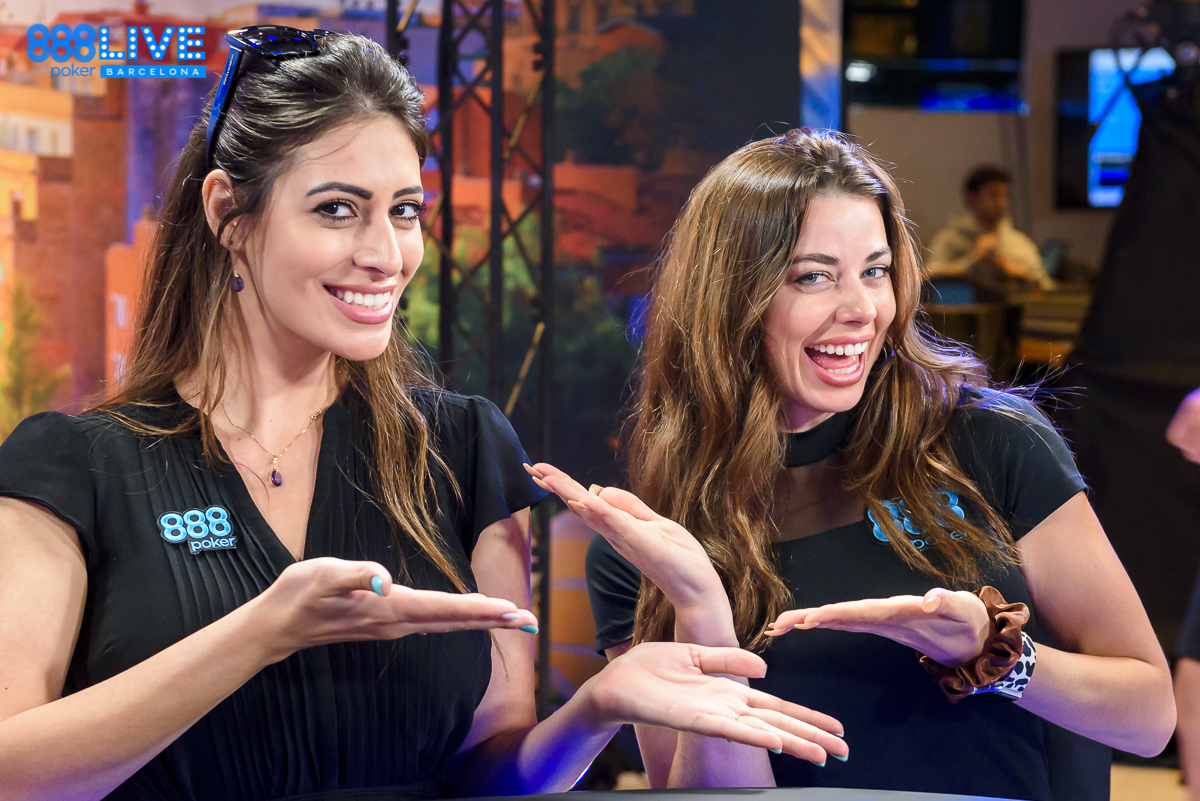 The money bubble burst in level 18 with Adrian Constantin showing Day 1C chip leader Alejandro De Lucio Sanchez the door. The remaining 36 players were guaranteed to walk away with at least €2,800.

Despite sending the bubble boy home, former 888poker LIVE Main Event champion Adrian Constantin could not repeat his victory. He bowed out in 14th place for €4,000, while Bhavin Khatri had to settle for a payday of €2,800 in 28th place.

Vivian Saliba was the only 888poker ambassador to reach the money. She finished in 27th place for €2,800. Two of her other teammates were eliminated just before the money bubble. Here are the final 13 payouts:

We entered Day 3 of the 888poker LIVE Barcelona Festival with thirteen players vying for the top prize of €68,000.

Here are their positions as the start of Day 3:

First out in 13th place started the day in thirteenth - Antonio Sanchez Torregrosa. He ran Ah6s into Sando Hauser’s As9d. With no joy in the cards, he exited for €4,000.

Next to go was Adan Soler Fernandez – in the same position in chips he entered the day with – 12th place. His Ts9s looked pretty but couldn’t overcome Hauser’s Kc7c. Hauser was now two-for-two in knockouts on Day 3. Adan took home a €5,480 payday.

In 11th place, it was Gerad Carbo’s time to do the knocking out. On the receiving end was Jose Manuel Gonzalez, who entered Day 3 in 6th place. He cashed for €5,480.

Shockingly, 10th-place went to the one of two Brits, Ashley Timms. He had entered Day 3 in top position but with a tenuous 2BB lead over Ewen Trevidy and Alexandre Ventura Bolet. But he had lost a few sizeable pots to his nemesis and player, who had eventually knocked him out. He ran his Ac2h into Hauser’s AsJc.

Hauser was now three-for-three in Day 3 knockouts if you're keeping count!

888poker LIVE Barcelona – And Then There Were Nine! Here are the final table standings on Day 3:

After the final table was set, Alex Baena was first to hit the canvas in ninth place for €7,500. His AdTd couldn’t put a beat on Kimmo Kurko’s JhJd. 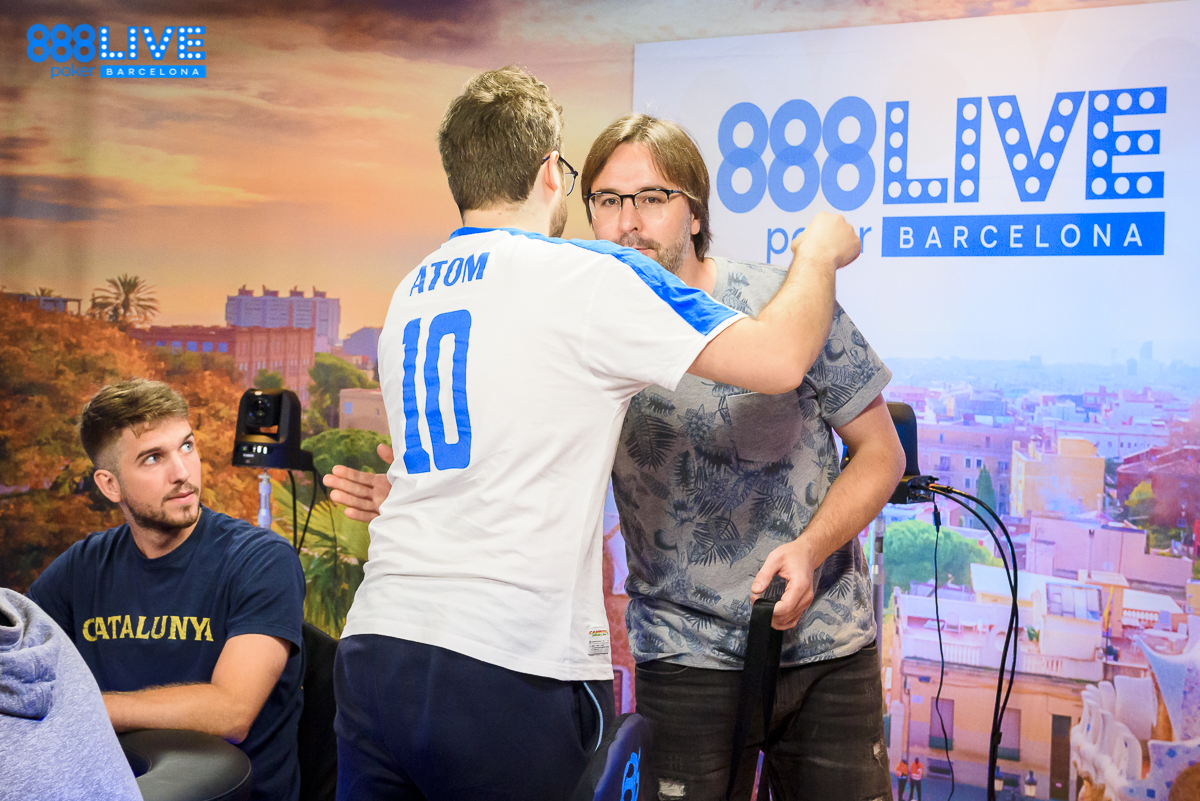 The battle between Hauser and Kurko to knockout players continued as Ewen Trevidy found himself on the rail in 7th place for €13,000. His QdTc made two-pair on the river, but Hauser made a king-high straight with Jh9h.

Ten minutes later, Gerad Carbo also found himself reaching for the door as Kuro struck again. Carbo’s As9h was no match for Kimmo’s AhQh, and he was out in 6th for €16,500.

Bernard Carreras fought a good fight, managing to ladder up into 5th place for €20,000. But he too fell prey to the superior cards of Kurko – his Ad9s falling short of Kurko’s AhJd.

Next to say his goodbyes was the last remaining Brit in the pack (and Chris Eubank Jr’s manager!) Stefan Wesson. He went out in 4th place for €24,000 at the hands of Sandro Hauser.

…and then there were three…

Around twenty minutes later, the Finn, Kimmo Kurko, made his exit in 3rd place. He collected the pre-designated payout of €39,800. And as fate would have it, it was Hauser who took him to task with AsKh. Kurko’s Jc5c was no match.

But with the AdKc3c4d3h final board, Hauser must have been sweating the river with his AK!

888poker LIVE Barcelona – And Then There Were TWO! 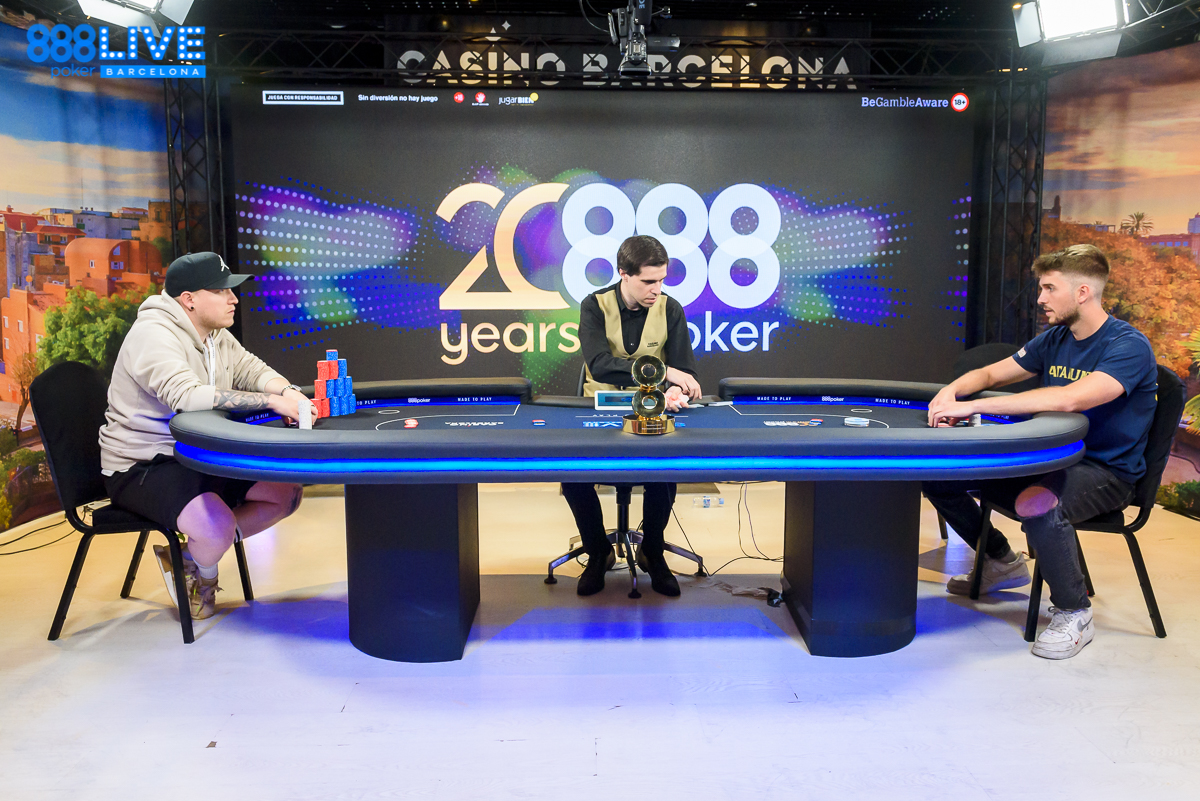 Heads-up action saw the Spaniard Alexandre Ventura Bolet and the Italian Sandro Hauser face off for the trophy and the remaining prize money of €13,800.

Hauser had a massive 3:1 chip lead - 7.4M versus Ventura Bolet’s 2,5M. But Alexandre battled back. He managed to almost even the playing field after a double up with the blinds at 80K/160K/160Ka.

Hauser hit back in level 28 with the blinds at 100K/200K/200Ka. He raised Ventura Bolet’s blind with QdTc. Alexandre called with 9c4h.

The Qc9d6c flop gave both players apiece. Ventura Bolet check-called Hauser’s c-bet for 750K. With the pot now ballooned to 3M and a 6d on the turn, Hauser pushed for his remaining 2.3M.

The Spaniard called. and the Italian was now back with a massive chip lead.

But another double-up by Ventura Bolet evened things up again, now almost two hours into heads-up play! It took another 45 minutes for Hauser to finally pull away, challenging the Spaniard’s big blind with KcJd.

With only a 2M stack at the start of the hand, Ventura Bolet called with 9d3d.

The board ran out KdQs2d5h2s, crowing Sandro Hauser as the winner and latest 888poker LIVE Barcelona Main Event Champ! 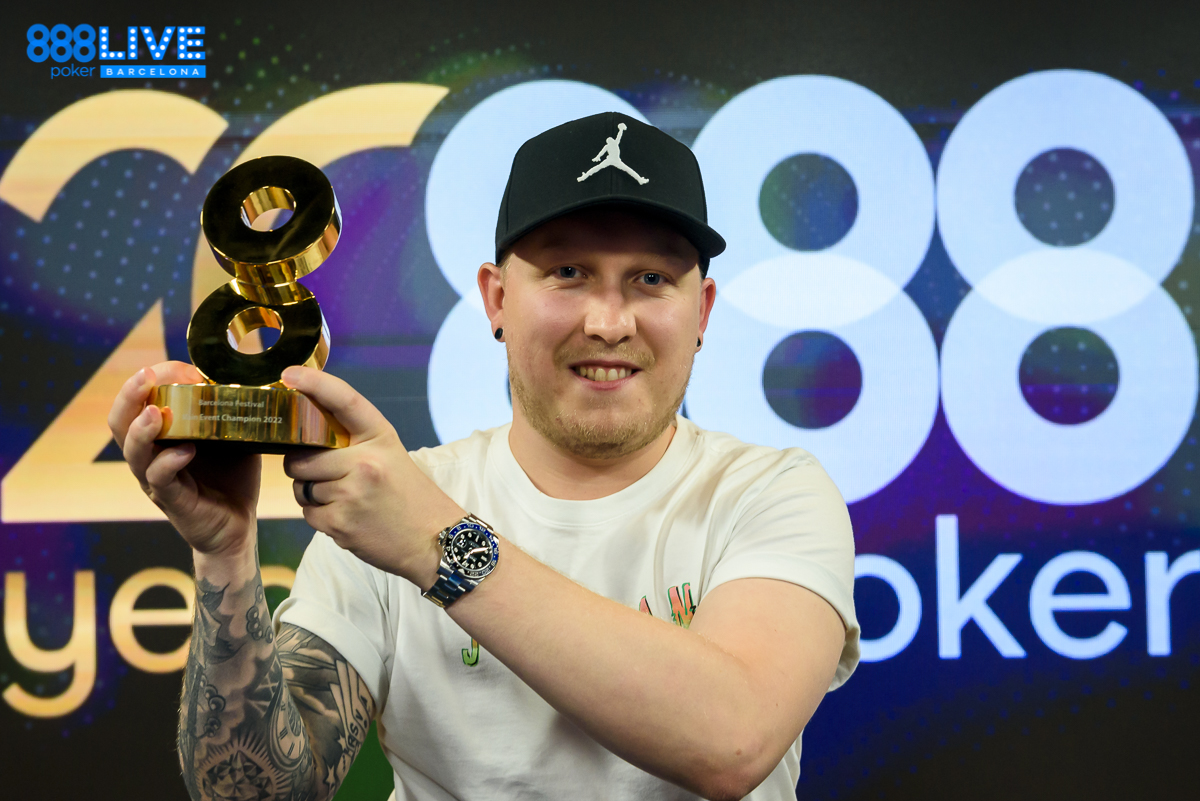