The 888poker Super XL returns for its sixth edition from September 17 - 25, with a whopping $4M in guarantees 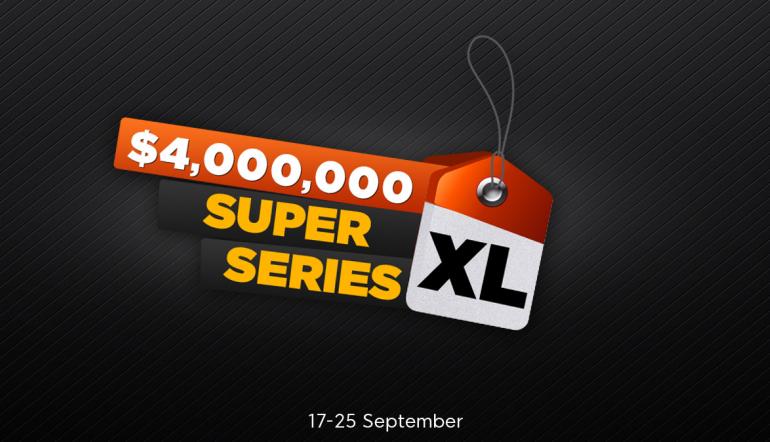 Once again 40 different events are on the schedule, with each offering a Main, Mini and Turbo version of each tournament.

"I can't wait to play the upcoming 888poker Super XL Series," says the most accomplished tournament player in online poker history. "There is a great selection of tournaments every day with great structures and a wide variety of poker tournament types to keep it fresh. I'm hoping I can take one down as the newest 888poker ambassador. "

In addition, there will be Mini, Micro, Turbo and Super Turbo Main Events offering a combined $210,000 in guaranteed prize pools!

"I am very excited to be playing every event but if I had to pick a favorite it would have to be the $2,100 High Roller followed by the Main Event," says 888poker Ambassador Dominik Nitsche. "I just think it's a great series scheduled at the perfect time. In my opinion scheduling is the most important factor for any online tournament series. For a lot of other players and myself, there is just not very much to play in September so the XL Series fits in very nicely. A lot of people will be at home and will have a chance to compete for big prizes. The satellite system is also great as it gives a lot of lower stakes players a chance at big money."

Here's a look at the entire Super XL Series schedule:

Back in January, the fourth edition of the 888poker Super XL Series covered all guarantees by an average of 210%, while the $1.2 million Main Event prize pool ended up being the highest MTT prize pool ever offered on 888poker. Finland's "jnevanli" defeated UK's "carmen.1957" to win the title after striking a heads-up deal.

"888 did a great job of listening to the players," adds Nitsche, who actually won May's Event #37: Mini Main Event for $36,541.50. "There is clearly a lot of demand for more mid-to-high stakes tournament series on the Internet, especially during times that are a bit quiet for live poker like last May. I'm sure this XL Series will be the best yet and I can't wait to make a deep run in a big event and possibly stream it on Twitch."

Daily qualifiers for the Super XL series are running now. Here's what you can expect for each day of the week:

The latest Super XL Series is sure to draw some of the biggest names in the game including Moorman and Nitsche, as well as fellow Ambassadors Bruno Politano, Bruno Kawauti, Akira Ohyama, Dominik Nitsche, and Kara Scott.

"I think the growth of the Super XL Series shows the demand there is for poker," says Moorman. "People want to play big events for big money online. I'm so glad 888poker is helping to fulfill this."

Satellites for the Super XL Series, which start as little as 1¢, are happening right now. Log onto the 888poker client to win your seat today!