Parker TonkaaaaP Talbot is the latest 888poker Ambassador and one of the game’s most popular personalities We spoke to TonkaaaaP about joining the team. 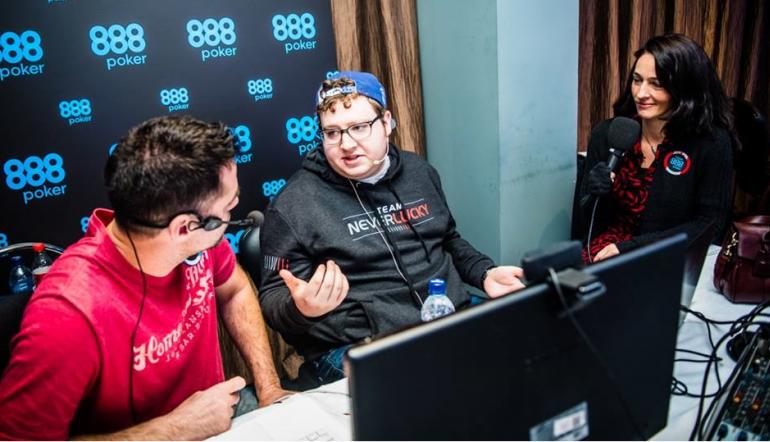 It is with great enthusiasm that we announce the latest addition to 888poker’s team of Ambassadors -- Parker “TonkaaaaP” Talbot. One of Twitch’s hottest poker streamers, Talbot will not only stream action from 888poker at least five days a week, but he’ll also play in our live events and join David Tuchman in the commentator’s booth.

“I'm obviously a big fan of 888poker as I play a chunk of my online volume there,” says Talbot. “When presented with the opportunity to become an 888poker Ambassador, it became apparent that this could turn into something very exciting!”

He continues: “I'll be streaming 888poker every day I stream, which is currently Tuesday, Wednesday, Thursday, Saturday, Sunday starting at 1 p.m. EST at neverlucky.tv. I play a pretty high average buy-in, but I have recently been mixing in a lot of $20-$50 games for volume because I've realised how awesome the $30 tournaments are on 888poker. So basically, every $22 tournament that runs in my schedule will be played and streamed!”

Among Talbot’s favourite events are the Crocodile, the Mega Deep Turbo, and the Whale. He’s also looking forward to playing the upcoming Super XL Series.

“The XL series has been killing it recently, and I can't wait to get in there and duke it out later this month,” he says. “888 is 100% a premiere online poker operator. I'm very hopeful for 888 taking over the game in the coming years. The site has been continuing to grow for a good long while now with no signs of turning back. I can't wait to work with everyone at 888 and try to get the word out about just how great it can be.”

With a pair of younger brothers and sisters, Talbot grew up in a fairly large family in Mississauga, Ontario, Canada. According to him, he’s never held a “real” job, the closest being a gig as a hockey referee for kid games while he was in high school.

It was around that time he first discovered poker alongside his parents when the three of them caught an episode of the World Poker Tour. Talbot, just 13 years old at the time, became enthralled with the game, as did his parents. They were so intrigued that a few days later the family made an online poker deposit, while Talbot and his dad would pull out a deck of cards and play against each other.

“My dad and I played together for years,” says Talbot. “I was probably 16 when I started to play on my own. I never played too much. I was almost certainly terrible, but I was in love with the game.”

Upon graduating high school, he spent two years at the University of Ottawa, first majoring in mathematics and then switching over to a general Bachelor of Arts degree. While at University, Talbot took a year off from any form of poker, but on the day he turned 18, he paid a visit to Lac-Leamy Casino.

“I lost $100 that night, and it was devastating,” Talbot recalls. “However, two days later my birthday gift from my parents arrived. It was an amazing care package from my mother and a cheeky $100 bill from my pops. I took that $100 and never really looked back.”

“In the summer, I made the decision to drop out after I went on an MTT heater and won $50,000,” he admits. “The degree dream ended quickly, and I decided I wasn't going back.”

That’s when variance hit, and he promptly gave back $35,000. He considered returning to school, but then he pivoted to sit n’ gos (SNGs). It was a move that would change his life. After starting at $15 18-player SNGs, he worked his way up to the highest stakes six-max SNGs that online poker had to offer.

Since then, Talbot has made his fortune online, while also adding $246,368 in live tournament earnings. That includes a career-high $180,909 for finishing seventh in a €25,000 High Roller in Barcelona last August.

While his friends and family know him as Parker, online poker and Twitch fans know him as either “Tonkaaaa” or “TonkaaaaP.” How did that come to be?

“My nickname in high school was Tonka,” Talbot explicates. “My hockey coach used to call me a little Tonka truck because I would always bowl people over and hit them even though I'm not the biggest lad. A friend of mine on the hockey team took to it and started calling me Tonka all the time. It sort of just took off. When I made my first poker account, I tried Tonka, but it was obviously taken so adding the letter ‘A’ four times did the trick. Then ‘tonkaaaa’ was already taken on Twitch, so I just tossed a ‘P’ on the end.”

“I was never really interested in streaming until Jaime Staples and myself started to play some video games together,” admits Talbot. “He was always like ‘Dude, why don't you just stream? Just do what you do, but stream it!’ So, a few months later, once I'd decided to make the switch back to playing tournaments, I decided, why the hell not. I ordered a microphone, got an Overlay setup, and then it was off to the races. It's been almost 13 months, and there is no looking back.”

In just a little over a year, Talbot’s profile has skyrocketed. His opponents may fear him, but viewers love him.

“I think that I'm generally pretty relatable and genuine, and I think people can just join in on that,” he says when asked why his stream is so popular. “I'm generally upbeat as well, and I feed off of the energy of the chat. I could never stream and be exciting or have energy if I didn't have all the muppets hanging out with me and rooting me on. Winning hundreds of thousands of dollars on occasion can also be very helpful.”

Commentating and the Future

As previously mentioned, Talbot will join David Tuchman inside the commentator booth at 888Live events, something he already did during the 888Live Poker Festival London back in October.

“The last event that we streamed on neverlucky.tv was a huge success and it was the first time I met David,” Talbot recalls. “We hit it off pretty well. We have very similar in-your-face banter personalities, so there will be a lot of grief given to one another. I’m definitely excited to work with him again, and I recommend everyone to tune in because it will be a lot of fun.”

Talbot admits the last seven years – that’s how long it’s been since he devoted his life to poker -- have been a bit of a blur, but it’s also been a blast. He refuses to identify a single moment as his proudest poker accomplishment, instead choosing to focus on his career as a whole.

“I took a $100 bill and built it into what I have today,” he says. “Getting good at SNGs was a big one, my first huge tournament bink, winning six figures while streaming, having 16,000 people watching my stream, and now becoming an 888 ambassador. I’ve been really fortunate.”