What is Overlay in Poker?

Overlay is extra money added to a tournament prizepool so that the room meets its guarantee on that tournament. If, for example, a poker room advertises a $5,000 guarantee tournament, it’s making a promise that there will be at least $5,000 in the prize pool. If only 400 players pay a buyin of $100, it means total buyins only amount to $4,000 (ignoring any fees) and there would be an overlay of $1,000 which the poker room must add to the prizepool. Tournaments with overlay are more profitable because we battle through less players for a big prize. 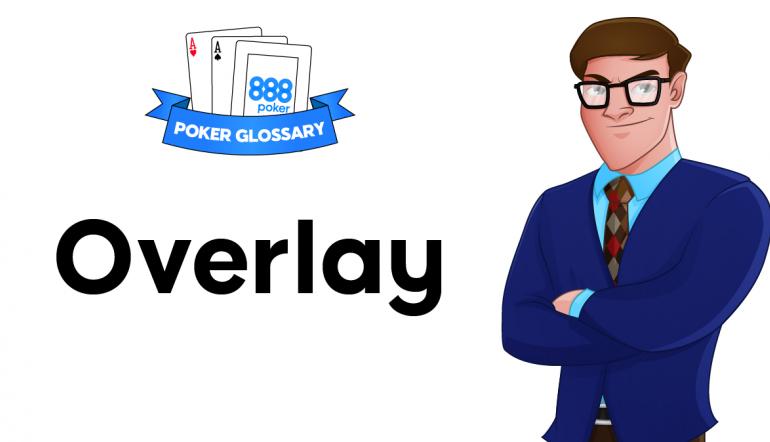 The network-added difference in order to complete the prize pool is referred to as “overlay”. Overlay is advantageous to the players because although the prize pool is the same, players are competing with less opponents to get the big payouts.

Example of Overlay used in a sentence -> Smart players know that events with big overlay are the most profitable in the long run.

How to Use Overlay as Part of Your Poker Strategy

Imagine a tournament guarantees a $5,000 prize pool and the buy-in is $100. Ignoring any poker room fees for simplicity, 50 players would need to buy-in in order to complete the full prize-pool. If more than 50 players buy-in then the prize pool will increase accordingly.

If we check the lobby and see that the tournament is about to start having only 30 players, it means that there is currently some overlay. The poker room is adding an extra $2,000 to the prize pool since the buy-ins have only generated $3,000. Large overlays mean the tournament is exceptional value to play; even a somewhat weak tournament player might be able to generate a positive winrate when the overlays are large.

However, it’s worth keeping in mind that most guarantee tournaments offer late-registration. If a tournament starts while still having a huge overlay, it will potentially attract a number of opportunist late-entrants. By the time the late registration period is over, there may be no overlay at all. So just because a tournament starts with overlay, does not necessarily mean that there will continue to be an overlay after all players join.

In many cases historical trends are the best way to spot potential overlay. A certain event may consistently run with overlay if the guarantees offered are too high, there is lack of interest in the event, or the network is dealing with low traffic. I.e. if a certain even is repeatedly offering decent overlays, this is usually the best indication that the tournament will be high-value.