Follow along as we investigate the net worth of Texas Dolly, Doyle Brunson, boasting 10 WSOP bracelets. Where does he rake in most of his wealth? 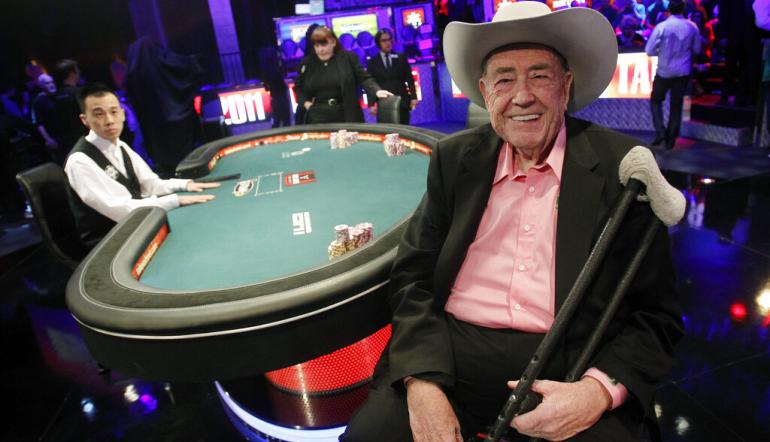 The Godfather of Poker ranks among the game’s most prominent figures. Doyle Brunson has seen it all, from old-school underground poker games to the early days of the World Series of Poker to the world of televised poker.

His legendary status, distinctive Texas cowboy features, and congenial personality have allowed Brunson to profit beyond the poker table.

An almost-unmatched knowledge of the game and its history also helps. Not many players can compete with Brunson’s brand awareness within poker.

In a career dating back decades, Brunson has seen it all in the world of poker. He was born in 1933 and grew up in the West Texas town Longworth. Brunson earned a master’s degree from Hardin-Simmons University but found he had a knack for poker.

After graduating, Brunson accepted a job as a salesman. However, he could make more money playing a few hours of poker than his sales job brought in an entire month.

Brunson began travelling the “southern circuit” looking for poker games around Texas and other states. Carrying a gun to avoid robberies was a part of doing business. Brunson was a victim several times – with a knife once put to his neck and a gun in his face.

When Benny Binion launched the first World Series of Poker in 1970, Brunson was one of the first players. In 1976-77, he won back-to-back WSOP Main Event titles. He has accumulated 10 WSOP bracelets and remains tied with Phil Ivey and Johnny Chan behind Phil Hellmuth.

Even late into his 80s, Brunson still plays in some of the biggest cash games in the world He has even featured on High Stakes Poker and other televised poker shows.

Beyond playing the game itself, Brunson has been involved in other poker-related ventures that have added to his income. Perhaps one of the best-known is his work as an author. He penned several books, including Super/System: A Course in Power Poker, in 1978.

That work set the course for modern strategy books and remains a popular read for many players. Brunson has released several other works, including his autobiography, The Godfather of Poker.

At the height of the poker boom, Brunson even lent his name to an online poker site – fittingly named Doyle’s Room. In 2018, he also teamed up with his son Todd to launch the Brunson Poker Pro training course.

Poker has been good to Brunson, and it appears he’s been put away some of those big winnings through the years. Not only does he have skills at the tables, but also some excellent bankroll management.