What is Bluff in Poker?

A bluff in poker means to represent that we hold a strong hand when we don’t. We make bets and raises in the hope that our opponent gives us credit for having a legitimate hand and folds the best hand as a result. Bluffing is an important part of poker and in many cases what makes the game so appealing to first time players. Without the aspect of bluffing, poker would simply be a game where players try to make the strongest hand. 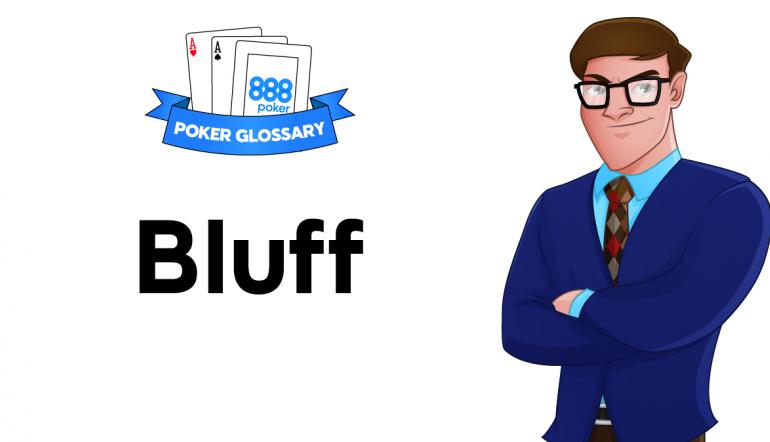 It’s common to use loose terms such as bluff and value-bet to describe our reasons for betting in poker. These are imprecise terms and there is often some measure of crossover especially on the earlier streets. For example, a bluff (typically designed to fold out better hands) might occasionally get called by worse hands. This might occur in Hold’em when bluff the turn with an Ace-high type holding and our opponent calls us with a Ten-high straight draw.

It is hence for the most part our intention when betting that determines how a certain bet will be named. If our primary intention is to get better hands than ours to fold, then we refer to this as a bluff even if some worse hands call and/or some of the better hands don’t fold.

Although in many situations it is obvious whether a player is value-betting or bluffing this is not always the case, and the same play could be referred to as both a value-bet or a bluff depending on the intention of the better. For example, perhaps an overly strong made hand is turned into a bluff and it’s unclear whether the better is attempting to make a thin value-bet (i. get called by worse) or fold out better holdings. This is mostly a symptom of bad play however; good players tend towards taking cleaner lines where the intention is clearer.

Example of Bluff used in sentence -> Our flush draw completely missed so we decided to run a big bluff.

How to Use Bluff as Part of Your Poker Strategy

Determining Profitability of a Bluff

How often a bluff needs to work in order to generate profit will be a function of its bet-sizing. At least, this is true if we assume that we have zero pot-equity. This would be in the case of us holding a complete garbage holding on the earlier streets, or a pure-bluff on the river where we no longer have additional outs to improve. Since even garbage holdings on the early streets often have a small amount of equity, it’s easiest to model bluff scenarios by considering a river situation.

Example – There is $100 in the middle on the river and we make a $50 bluff. How often does our bluff need to succeed in order to make profit?

A common novice assumption is that all bluffs must work at least 50% of the time in order to generate profit. After all, if our bluff fails most of the time why would we make it? This idea fails to take into account the fact that there are already chips in the middle, meaning that it’s possible for bluffs to be profitable even if they fail the majority of the time.

The required success frequency on a bluff is directly proportional to the percentage of the total pot we invest when making our bluff. In the above example we are investing 33% of the total pot. (After our bluff there will be $150 in the pot of which we are investing $50). This bluff is hence profitable so long as it picks up the pot more than 33% of the time. If the bluff were to work 40% of the time on average, we should presumably fire all of our air hands in this spot. This can sometimes be psychologically difficult for many players, since they’ll often realise intuitively that their bluff is failing the majority of the time. However, those versed in the mathematics of bluffing will understand that it is correct to continue bluffing in this spot since it carries a positive long-run expectation.

For more information on calculating the profitability of bluffing when our hand also has a measure of pot-equity, see the glossary entry on semi-bluffing.

When is Bluffing a Good Idea?

We’ll talk here about pure-bluffs, meaning that we have zero pot-equity. As a general guide, there is usually no need to make pure-bluffs on the flop or turn. We can avoid pure-bluffs in favour of semi-bluffs (bluffs with some pot-equity). The only time we would be incentivized to pure-bluff on theflop or turn would be if our opponent had a tendency to fold far too frequently.

The situation where most of our pure-bluffs make sense is on the river. The river is the only street where our objective is to fire our absolute best and worse possible holdings. On earlier streets we usually don’t want to fire our worst possible holdings, since we can fold these in favour of continuing with higher-potential hands.

The most important metric for determining our worst possible hands on the river is their showdown value. If a hand has zero chance of winning at showdown, then it becomes an extremely logical bluff candidate. The expectation of a river check will be zero (since the hand can never win), but the expectation of a bluff may end up being profitable provided our opponent is folding at above the required success frequency.

Hands with showdown value may still be profitable as bluffs, but they are usually less logical as sound bluff candidates. This is because they have the potential to win at showdown and can hence generate a positive expectation as a check. The issue is not so much that a bluff won’t be profitable, but more a question regarding whether the expectation of checking ends up being higher than the expectation we generate through a bluff.

Of course, just because we have an air hand on the river, does not guarantee that bluffing will be profitable. Perhaps our opponent is a calling station for example. We still want to take into account any specific reads that we have on our opponent. Against players who don’t fold the river, we might want to shut down all of our bluffs and only bet the river for value.